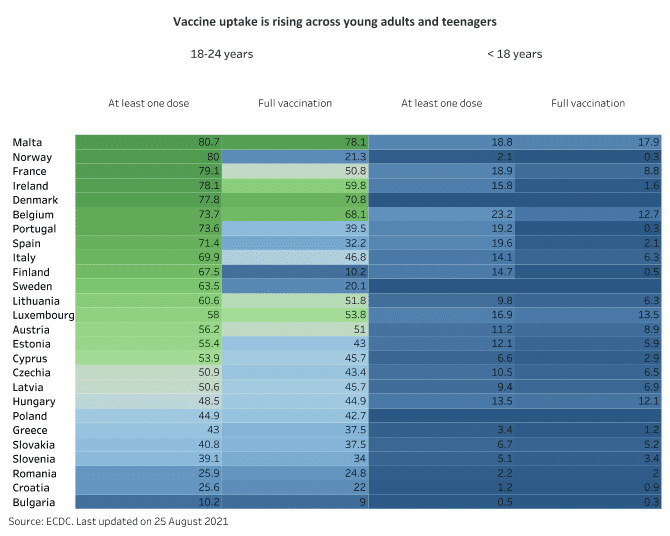 – The average of daily cases has continued to drop and stands now at around 10,000. While the number of hospitalized individuals is also declining, daily deaths have spiked up to around 100.

– The surge in infections in case homes is intensifying the debate on providing third doses to vulnerable population groups, with several regions asking the central government for booster shots. However, Madrid is unlikely to move until the European Medicines Agency (EMA) takes a final decision on the matter.

– The government has approved a pension reform that indexes payments to inflation and creates incentives for workers to delay their retirement. However, trade unions and employers still have to agree on a controversial mechanism to improve the sustainability of the system before 15 November.

– Daily cases continue to decrease slowly, with the seven-day rolling average of infections at around 20,000. However, hospitalizations are spiking up again, with the daily average at around 11,000.

– The government confirmed on 24 August that booster shots would be provided to the over-65s and individuals with comorbidities. Around 62% of the population has gone through a full vaccination cycle, and the pace of daily jabs seems to be gaining speed again.

– A large majority of respondents to an ELABE opinion poll continue to back President Emmanuel Macron’s decision to mandate the use of a health pass to participate in a wide range of social activities. In contrast, only 34% support anti-pass protests.

– The seven-day rolling average of daily new cases is around 6,500, registering a slight increase compared to last week. Sicily seems set to lose the “white zone” status amid a worsening Covid-19 health situation in the island. It will likely become a “yellow zone” (moderate risk) on 30 August.

– Italy is on target to reach its goal of vaccinating 80% of the population over the age of 12 by the end of September. As of 25 August, the percentage of those aged over 12 who are fully vaccinated is close to 68%, equal to around 36.7mn people.

– The scope of the “Green Pass,” which shows that people have been vaccinated, tested negative, or recovered from Covid-19, will be expanded once again from 1 September, this time regarding transport and education (including universities).

– Pressure on the public health system is constantly rising as Covid-19 cases and patients under intensive care are increasing, with a record of 4,608 confirmed daily infections registered on 24 August. All leaves for health public sector personnel have been suspended from 1 September.

– An estimated 5.6mn people have been fully inoculated in a country of roughly 11mn. Strong resistance to the vaccine, and the holiday season have slowed down the vaccination rollout significantly over the summer. So far, there has been a reluctance to extend compulsory vaccination beyond the healthcare sector.

– Facing the threat of a new wave of infections, the government announced on 24 August a new raft of public health measures that will take effect on 13 September to coincide with the start of the new school year. Most of the new curbs will only apply to those unvaccinated, including losing access to the rapid tests offered free of charge by the state.

– The seven-day rolling average of new cases per day has increased to around 200, but this is still one of the lowest figures in the EU. Given the restart of the school year on 1 September and the fact that the Delta variant now accounts for 95% of infections, the health ministry anticipates the fourth wave of the pandemic to pick up in mid-September.

– While approximately half of the country’s population has been fully vaccinated, immunization rates are generally lower in the eastern parts of the country and rural areas. Authorities are also concerned about the relatively low vaccination rate (around 63%) in the 80+ age group.

– In September, parliament is expected to adopt a bill that would allow employers to check the Covid-19 vaccination status of their employees, which is currently protected by data privacy laws.

– Although the overall caseload remains low, averaging just around 100 per day, the seven-day rolling average of new cases has been steadily rising in the past two weeks.

– Ahead of the start of the school year on 1 September, the government is actively promoting a vaccination campaign for students. To date, around 14% of persons in the 12-17 age bracket have received at least one dose of vaccine.

– According to Hungarian foreign minister Peter Szijjarto, Hungary is in advanced talks with Russia on the production of the Sputnik V vaccine in Debrecen in 2022; the country is also expected to sign a new 15-year gas supply deal with Gazprom in September.

( 5 mins) All workers will be required to show a Covid-19 health pass from 15 October, one of the world’s toughest anti-Covid regimes that has already sparked riots and which may cause chaos in the days ahead.

ITALY: A noisier political backdrop but Draghi won’t lose much sleep over it

( 5 mins) The main takeaway from the 3-4 October local elections is that the outcome will not cause any major problem to Prime Minister Mario Draghi’s government. The former ECB chairman, who enjoys approval ratings close to

( 3 mins) As expected, the Socialist Workers’ Party (PSOE) and far-left Unidas Podemos reached an agreement on the draft 2022 budget on 5 October, which the government is expected to approve and send to the Congress of