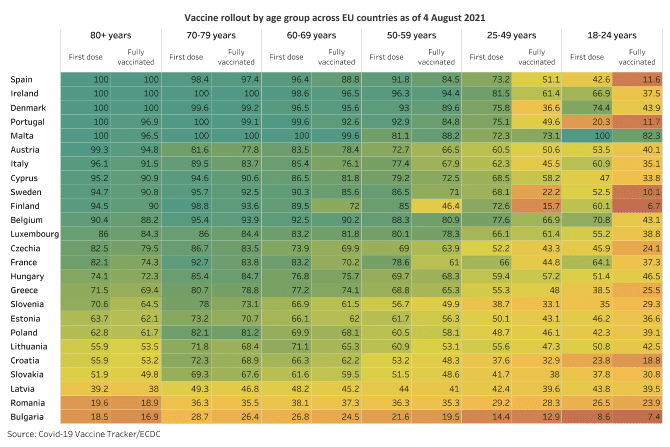 – Last week has seen an increase in the number of both hospitalized patients and deaths due to Covid-19. However, after peaking at around 25,000 last week, the number of new daily cases has started to drop and is now at around 21,000.

– Around 59% of the population has gone through a full vaccination cycle. Still, the pace of daily inoculations has slowed down due to the summer holidays. As a result, the average of daily jabs stands at around 360,000, compared with 577,000 a month ago.

– Rising tensions between the People’s Party (PP) and far-right VOX might lead to early regional elections in Andalusia in the fall or early 2022. Andalusian elections usually provide a harbinger of national electoral trends; a strong PP victory would put the conservative party in a good position to win the next nationwide legislative poll.

– The curve of new daily cases seems to be flattening, with the average at around 22,000. Hospitalizations and deaths due to Covid-19 have continued to rise but remain far from the levels seen in previous peaks of the pandemic.

– The daily average of jabs has slightly slowed down but continues to be above 570,000. More than 54% of the population has gone through a full vaccination cycle. Meanwhile, France’s Constitutional Court is currently examining the bill mandating the use of a health pass, which is expected to enter into force on 9 August.

– A recent opinion poll by ELABE shows that the popularity of presidential contender Xavier Bertrand among right-wing voters is now at the same level as other potential center-right candidates such as Laurent Wauquiez or Valerie Pecresse. It remains unclear whether the center-right will be able to agree on a unified presidential bid.

– Italy has entered a fourth wave of the pandemic, with cases, hospital admissions, and deaths increasing again. The seven-day rolling average of new daily cases is close to 5,500.

– Just over 60% of the population aged over 12 is fully vaccinated, though many people who want the jab are still reporting difficulties and delays in accessing it. Rome last week set a new target of having the entire over-12 population vaccinated by the end of September.

As Italy prepares to make its’green pass’ health certificate a requirement for entry to many cultural and leisure venues from 6 August, the government is now looking at making it a necessary part of everyday life, including public transport, schools, and workplaces.

– The current seven-day rolling average of daily new cases is just below 2,700. A marked rise in daily infections was recorded on 3 August, as 3,428 total cases were identified across the country.

– As of 3 August, Greece had administered 10.6mn vaccines, resulting in 53.2% of the total population having received at least one jab and 48.2% being fully vaccinated. Daily vaccination rates have slowed considerably over the last few weeks, and fewer people are coming forward for their first jab, partly due to the peak summer vacation season.

– Positive news on visitor arrivals for July and bookings in August have boosted the government’s confidence in recent days, with reports suggesting that the official economic growth forecast could be revised upwards from 3.6 to 4%.

– The increase in the number of daily new infections continues at a very gradual pace, with the seven-day average now having returned to the level of 3,000 cases.

– The 16 regional states have decided to extend vaccination offerings to all children above age 12, despite the lack of a formal recommendation by scientific advisors; mRNA booster shots will be offered to recipients of the AZ and J&J vaccines as of September.

– Protests against Covid restrictions turned violent in Berlin last weekend. While developments in France have attracted public attention, the protest movement in Germany appears to be much less pronounced than in the neighboring country.

– The decline in the number of daily new infections seems to be slowing down, as the seven-day average has reached the level of 25,000 cases; hospitalizations and deaths remain far below previous pandemic peaks.

– School children aged 16 and 17 years are expected to receive a vaccination offering soon; the is intended to ensure a smoother return to schooling after the summer vacations than last year.

– New infections are rising at a modest pace, with the seven-day rolling average of new cases reaching around 140 per day. If daily infections rise above 1,000, the government will consider tightening restrictions in the country’s regions with the lowest vaccination rates.

– As long as the epidemiological situation remains favorable, the government is expected to avoid the divisive issue of compulsory vaccination. At the same time, authorities have pledged to introduce harsh measures to tackle anti- vaccine groups following multiple attacks on vaccination sites in recent weeks.

– On 11 August, the lower house of parliament is expected to consider a bill that would allow employers to check on their employees’ vaccination status. Personal data protection laws currently shield such information.

– The number of cases, deaths, and hospitalized patients remains stable at low levels. As of last week, the authorities detected only 53 cases of the Delta variant, which suggests that this variant is still not widely spread.

– Mandatory vaccination for healthcare and social care professionals will start on 15 August. However, this is unlikely to boost the sluggish vaccination campaign as immunization rates among these occupational groups are already high.

– The authorities are taking advantage of a strong recovery in household earnings and retail sales to boast about its successful handling of the pandemic and paint an optimistic economic picture ahead of the general election next spring.