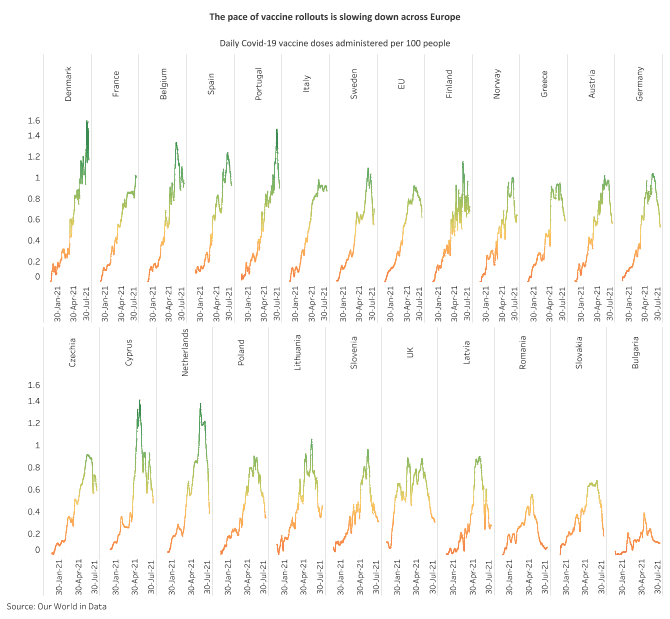 – The Delta variant now makes up around 70% of all new Covid-19 infections, although the surge in cases – with the daily average at 25,000 – seems to be slowing down. The number of hospitalized patients is also on the rise, and the average number of daily deaths due to Covid-19 has gone up to around 25.

– There is currently no agreement between regional governments about whether to implement a health pass. While certain regions (e.g., Canary Islands and Galicia) require proof of vaccination to enter indoor spaces, others (e.g., Catalonia) argue that such a measure is unfair towards those who still have not had a chance to get the jab.

– The PSOE-Unidas Podemos ruling coalition has started conversations with smaller regionalist parties to obtain their parliamentary support for the 2022 budget, to be adopted in September. The key party to watch is still the secessionist ERC, which at this stage looks more likely than not to back the government.

– The seven-day average of cases has gone up to around 20,000, and the number of daily hospitalizations due to Covid-19 is also rising slightly. However, the average of daily deaths due to the virus remains steady at around 23.

– More than 50% of the population has been fully immunized. France is one of the few countries where the vaccination pace does not seem to be slowing down (see graph above). A recent opinion poll by Ipsos shows that only 17% of individuals from the 18-25 age cohort are reluctant to take the jab.

– Economy Minister Bruno Le Maire will meet on 30 August with representatives from sectors affected by the health pass requirement. The meeting suggests the government might be considering the extension of certain support mechanisms beyond the summer.

– From 6 August, people in Italy will need a “Green Pass” – an extension of the EU Digital Covid-19 certificate – to enter gyms, swimming pools, museums, cinemas, theatres, sports stadiums, and other public venues, including indoor seating areas at bars and restaurants.

– Protests against the “Green Pass” scheme have taken place in several cities over the past few days, though multiple regions also reported a sharp uptick in vaccination bookings.

– Around 52% of the population is fully vaccinated. The government is considering making vaccinations mandatory for teachers ahead of the coming new school year – a move that could create tensions within the ruling coalition. In nine of Italy’s 20 regions, the percentage of unvaccinated school staff is above 50%.

– Greece recorded a rise in the number of daily infections in the country on 27 July, as 3,593 total cases were recorded. This is the highest number of cases recorded in a single day since April. The seven-day rolling average of new daily cases is around 2,700.

– Despite the recent slowdown, the vaccination program reached another landmark on 27 July, when the number of fully vaccinated Greeks passed 5 million (46% of the population). However, amid social and political concerns, the government’s plans to extend compulsory vaccination to schoolteachers have been shelved for the time being.

– Earlier this week, Athens announced that the minimum wage would rise by 2% starting from 1 January 2022. The symbolic increase reflects the government’s unwillingness to leave salaries unchanged but also its desire not to come into conflict with business owners who are being tested by the pandemic.

– Government health advisors are officially speaking of a fourth wave, as the seven-day average of new infections has jumped back above 1,500 cases.

– The next edition of the coordination meeting of the 16 regional state leaders – for now, without Chancellor Angela Merkel – has been brought forward to 10 August, amid debates about new restrictions.

– The grand coalition and the Greens agree on the need for stricter testing requirements for travelers returning from summer holidays – a factor that has driven last year’s autumn/winter wave.

– There is debate about the reasons behind the ongoing decline in new infections; the seven-day average was just under 50,000 cases a week ago and has now dropped under 35,000.

– Some speculation suggests that, amid still rising new infections, people may have deleted their tracking apps (and therefore do not quarantine or get tested) to avoid the “pingdemic” of self-isolation orders.

– The UK will reopen for double jabbed travelers from the US and the EU as of the beginning of August; as of the middle of that month, fully vaccinated people will no longer have to quarantine if they have been in contact with someone who tests positive for the virus.

– As in other Central European countries, the epidemiological situation remains favorable. The seven-day rolling average of new cases increased slightly above 100 per day, while death and hospitalization rates remain stable at low levels.

– Prime Minister Mateusz Morawiecki appears to be softening his stance on mandatory vaccination in the healthcare sector. Also, the country’s business associations are calling for the government to provide assurances that businesses will be allowed to remain open for vaccinated citizens in case a new wave of the pandemic hits.

– Despite the protracted assessment of the country’s national recovery and resilience plan by the European Commission, the government plans to push ahead with the adoption of bills outlined in the Polish Deal in September. However, some of the proposed tax amendments still lack support from all parties within the ruling camp.

– While the number of new infections continues to rise gently, the seven-day rolling average of new cases remains at just around 60 per day. As of last week, there were only 23 cases of the Delta variant identified in the country. However, the concentration of coronavirus in wastewater samples started increasing in Budapest and four other regions.

– The number of administered first vaccine doses dropped below 2,000 per day during the past week. Starting 1 August, the country will start a door-to-door campaign to reach unvaccinated senior citizens. On the same date, citizens vaccinated four months ago or earlier will be able to get a third vaccine dose.

– The European Commission has extended the deadline for the assessment of the country’s EUR 7.2bn resilience and recovery plan until 30 September. Despite the delay, the government plans to start funding recovery projects from national budget funds.

GERMANY: What to watch on and beyond election night

( 3 mins) Ahead of the 26 September Bundestag elections, the overall polling picture remains unchanged. At around 25%, the Social Democrats (SPD) of Finance Minister Olaf Scholz continue to lead ahead of Armin Laschet’s Christian alliance (CDU/CSU)

( 3 mins) The UK has once more extended the grace periods for border checks in the Irish Sea – this time, however, accepted by the EU. While this will mean more time for both sides to find

( 3 mins) Yesterday’s (12 September) main debate of the three chancellor candidates was watched by more than 10mn people and produced few surprises. Finance Minister Olaf Scholz from the Social Democrats (SPD) won the debate in the

UK: Government wins on social care in parliament but loses in opinion polls

( 5 mins) PM Boris Johnson this week managed to get parliamentary approval for a package to tackle Covid healthcare backlogs and improve social care funding. GBP 12bn annually in extra taxation will be raised via a 1.25