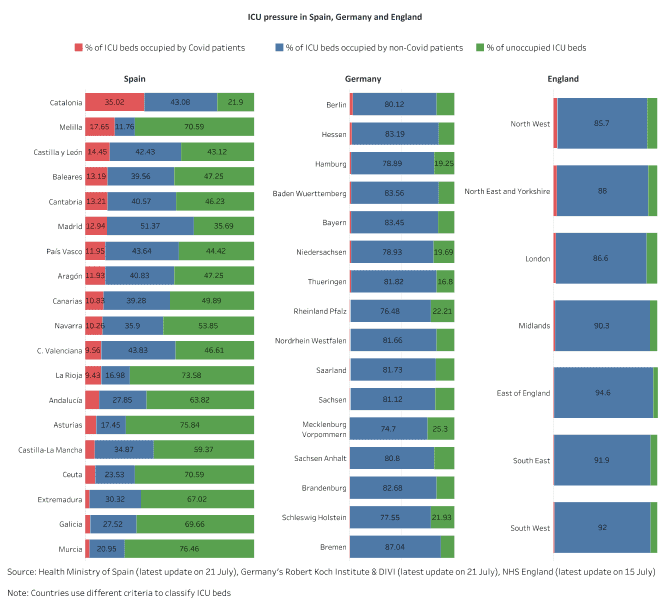 – The average of daily cases has gone up to above 20,000, and the authorities are worried about the increase of infections among the over-50s. The number of hospitalized patients is also on the rise, but the average of deaths due to Covid-19 remains around 12. Around 52% of the population has gone through a full vaccination cycle.

– Several regions have continued to introduce incremental restrictions to counter the latest wave of the virus due to the Delta variant. While some of them have asked the central government to push for a common nation-wide legal framework, Madrid remains unlikely to pursue such a course of action.

– The Congress of Deputies approved this week a decree to reduce the number of temporary workers in the country’s public administration, one of the reform commitments made by Madrid to receive EU recovery funds. The next legislative signpost for Prime Minister Pedro Sanchez will be the approval of the 2022 budget in the fall.

– Cases have continued to increase due to the spread of the Delta variant, with the average of infections currently at around 11,600. However, the number of hospitalizations has risen only slightly, while daily deaths due to Covid-19 remain below 20. Meanwhile, the average of daily vaccinations has climbed to over 610,000.

– Opposition parties have introduced around 1,000 amendments to try to delay the approval of the government’s bill introducing compulsory vaccination for healthcare workers and mandating the use of a health pass to participate in a wide range of social activities.

– Some municipalities are introducing additional restrictions – such as nighttime curfews or the obligation to wear face masks – to control the spread of the virus.

– The seven-day average of new infections is back above 1,000 cases, but the relatively slow speed of the increase means that there is still hope that the vaccine rollout will progress sufficiently before the autumn.

– As the share of fully vaccinated people approaches 50% of the population, there is debate about a new incidence threshold for restrictions, likely to be increased from 50 to 200; the seven-day incidence value is currently at 11.4.

– There are concerns about a new surge of infections in the areas hit by last weekend’s floods, as help and support teams arrived from all parts of the country; local authorities are responding with mobile vaccination offerings directly in the worst affected areas.

– The seven-day average of new infections is headed towards 50,000 cases; at the same time, more than 36mn people have received two doses of the vaccine.

– The government went ahead with its 19 July reopening of England. Still, the rising caseload and resulting staff shortages due to large-scale self- isolation orders have led to official calls for people to remain vigilant.

– As in previous iterations, the government’s messaging remains erratic; at the same time, the government may lack the double Commons and Lords support required to move ahead with domestic Covid passports.

– The seven-day rolling average of new infections is slowly rising but remains below 100 per day. The Delta variant now accounts for an estimated 45-47% of all new cases.

– The number of administered first doses dropped to around 217,000 in the past week – the lowest since early January. Despite calls from the medical community to start mandatory vaccination of employees in the healthcare and education sectors, Prime Minister Mateusz Morawiecki regards this as a “measure of last resort.”

– Concerns over the independence of institutions responsible for tackling corruption – as described in the European Commission’s (EC) rule of law report on Poland published on 20 July – could prompt further delays in the EC’s approval of the country’s national recovery and resilience plan.

– The caseload has been rising for the second consecutive week, but the seven-day rolling average of new cases remains below 50. There is also no uptick in hospitalizations, and the share of positive tests stands below 1%.

– Starting August, third booster shots will be available to all residents that were immunized four months ago or earlier. The move likely targets those vaccinated with the Sinopharm vaccine amid lingering uncertainty over its effectiveness against new virus variants.

– After the government decided to introduce compulsory vaccination to employees in the healthcare sector, the country’s influential Chamber of Commerce and Industry (MKIK) is calling to extend this provision to other sectors of the economy and allow employers to relocate or dismiss employees refusing vaccination.

GERMANY: What to watch on and beyond election night

( 3 mins) Ahead of the 26 September Bundestag elections, the overall polling picture remains unchanged. At around 25%, the Social Democrats (SPD) of Finance Minister Olaf Scholz continue to lead ahead of Armin Laschet’s Christian alliance (CDU/CSU)

( 3 mins) The UK has once more extended the grace periods for border checks in the Irish Sea – this time, however, accepted by the EU. While this will mean more time for both sides to find

( 3 mins) Yesterday’s (12 September) main debate of the three chancellor candidates was watched by more than 10mn people and produced few surprises. Finance Minister Olaf Scholz from the Social Democrats (SPD) won the debate in the

UK: Government wins on social care in parliament but loses in opinion polls

( 5 mins) PM Boris Johnson this week managed to get parliamentary approval for a package to tackle Covid healthcare backlogs and improve social care funding. GBP 12bn annually in extra taxation will be raised via a 1.25