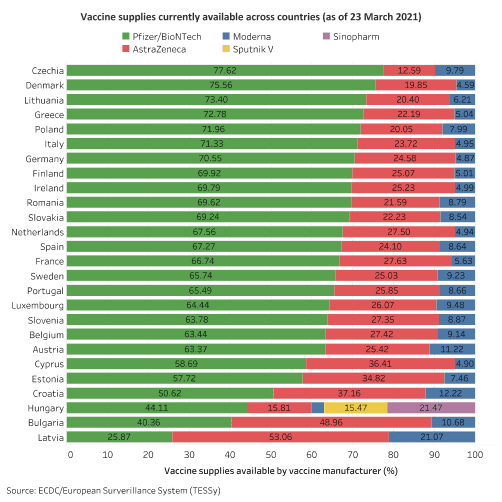 – The number of daily cases has risen to above 30,000 in the last few days. Last week, the government imposed new restrictions on 16 departments (out of 101); three additional departments (Rhone, Aube, and Nievre) will see the imposition of similar measures this week.

– The health authorities are opening large vaccination centers in places such as football stadiums. The army and members of the fire service have been called in to assist with the immunization campaign.

– According to a recent poll by ELABE, 58% of respondents now believe President Emmanuel Macron’s government was wrong not to introduce a stricter lockdown in January. Moreover, public trust in the government’s ability to manage the pandemic has plummeted to its lowest level since last March (33%).

– The nationwide number of daily cases remains stable at around 5,000, but some regions are starting to see a renewed surge in infections. The government has proposed that all businesses close their doors by 8pm during Easter week.

– Last week’s suspension of the delivery of the AstraZeneca jab has slowed down the vaccination campaign by 25%, according to data released on 23 March by the health ministry. The authorities immunized 666,978 individuals last week, against 893,570 the previous week.

– The Catalan regional parliament will hold a vote on 25 March to elect a new regional prime minister. However, ERC candidate Pere Aragones is unlikely to obtain the confidence of the chamber in the first-round vote, and a second vote will likely be needed on 30 March.

– The country reported Italy 460 coronavirus-related deaths on 24 March against 551 the day before – the highest number since late January. The seven-day rolling average of cases has almost reached 23,000.

– While the government aims at tripling vaccinations to 500,000 per day by mid-April, the rollout remains troubled by lack of personnel, poor management by some regions, and public mistrust. The country has administered about 8.2mn doses and fully vaccinated just over 2.6 million people (4% percent of the total population).

– After the Easter holidays, primary and pre-schools could possibly begin reopening in high-risk, restricted-movement “red” zones (where bars, restaurants, and many stores are closed). Finance Minister Daniele Franco has suggested that support measures for the country’s battered economy could be phased out towards year-end.

– The seven-day average of new infections is now rising significantly again; it is back above 15,000 cases, and the nationwide incidence value has crossed the threshold of 100, as Germany is now firmly within the third wave.

– After an all-night meeting with the 16 regional state leaders, Merkel announced a tightened Easter lockdown, only to publicly row back on this and apologize for the legally and organizationally unviable plan within hours.

– Political leadership is by now almost entirely absent, with disastrous consequences for both pandemic management as well as public support for the government in general and Chancellor Angela Merkel’s Christian Democrats (CDU/CSU) specifically.

– Having previously fallen steadily, the seven-day average of new infections has now remained largely unchanged for about two weeks, just above 5,000 cases.

– The government is in talks with the EU to find a negotiated solution to both sides’ competition for the limited available vaccines produced by AstraZeneca; the EU has further expanded its own powers to block exports, but it remains unlikely that member states would use this for an immediate escalation.

– While the UK is surpassing the threshold of 30mn vaccinated people, the EU’s vaccination fiasco poses risks for the summer tourism season; it is not clear that the UK will fully allow international travel this summer, given the spread of virus mutants.

– Despite a national lockdown, Greece registered 3,062 Covid-19 cases on 24 March, 524 fewer than a day earlier. Athens and the surrounding Attica region remain the biggest infection hotspots.

– The government’s plan to distribute free antigen Covid-19 self-testing kits through pharmacies seems to have caught both public health experts and pharmacists by surprise. Starting from April, everyone with a social security number will be entitled to four test kits per month.

– According to a 22 March report by the Parliament’s Budget Office, Greece will register subdued growth of 2.7% in 2021 due to the lockdown extensions in Q1. Although the Finance Ministry’s estimates for 4.8% growth have not been formally revised yet, it is reported that the ministry is also leaning towards a revised figure of close to 3%.

– The seven-day rolling average of new infections surged above 24,000, which marks a 25% week-on-week growth. The B.1.1.7 variant of the virus first found in Britain now accounts for around 80% of all infections. Around 75% of all hospital beds and ventilators for Covid-19 patients are occupied.

– Additional restrictions will come into force on 27 March. This includes the closure of pre-schools and kindergartens, large household goods stores, and beauty salons. Small retail facilities and religious services will still be allowed to operate. These countrywide measures are set to remain in place at least until 9 April.

– The immunization campaign has been slowing down in recent weeks. Government officials have noted a decrease in public trust in the AstraZeneca vaccine, with up to 70% of residents missing their vaccination appointments in recent days.

– The infection, hospitalization, and death rates from Covid-19 have risen to the highest point since the start of the pandemic. Healthcare services are facing an acute shortage of staff, which is likely contributing to a high mortality rate.

– The authorities have approved two additional vaccines for emergency use: China’s Convidecia, and Indian-made CovidShield (licensed version of the Oxford-AstraZeneca vaccine). So far, the government has not ordered these jabs.

– The chamber of commerce is calling for the reopening of non-essential stores with health restrictions in place. According to the government, a gradual reopening that will include kindergartens and schools will likely commence in mid-April, depending on progress with vaccinations and the epidemiological situation.