PHILIPPINES: Economic worries may keep government from implementing a lockdown

Speculation is increasing in the capital of additional restrictions soon because new Covid-19 cases and the positivity rate have been rising steeply over the past two weeks. Today’s national number of 7,103 new cases is the highest since the start of the pandemic. 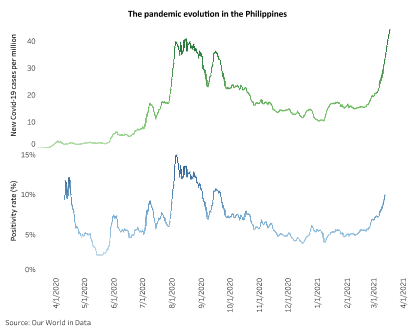 Compared to other countries in both absolute and relative terms, the numbers are low, but the upward spike in new cases and reports of declining availability of both Covid-19 and emergency room beds are raising public fears at a time when other countries in the region are demonstrating the opposite trend.

Contact tracing is weak, which makes it difficult to have a clear sense of how and why the case numbers are rising, but there is speculation that variants are accelerating virus transmission since the changes in activities and mobility have, in comparison, been rising only gradually. The focus is on the spread of the Brazilian and South African variants as well as a Philippine-specific variant called P3, which is being described as the third generation of Brazil’s P1 variant.

Despite the palpable public worry, the government is still reluctant to reimpose broad restrictions immediately. Currently, metropolitan Manila and its surrounding provinces, which accounts for about 40% of GDP, is under a quarantine regime called the general community quarantine, which allows most businesses and retail establishments to open, but keeps schools and entertainment venues closed as well as limits the capacity of public transportation.

In reaction to the recent spike, the government is choosing to tighten restrictions on indoor dining, public gatherings, religious services and inbound travel, as well as reducing staff in government offices. Much of the Philippines shuts down in the week before Easter, and the government may be hoping that this acts as the circuit breaker instead of an immediate shift to a stricter quarantine regime that would restrict people to their households except for essential activities – although the latter could be a possibility if the case and positivity numbers are still high or rising into early April.

Nonetheless, even if the government were to attempt to avoid stringent restrictions, the news of cases hitting a daily record (which is expected to be surpassed in the coming days) will itself likely reduce traffic in retail establishments until another downward trend is established.

Vaccinations have started but supplies are still limited and for now mainly still confined to public health front liners; large-scale vaccination that could address the issue of workplace or other public transmission is still a few months away.

MYANMAR: Further down the rabbit hole

INDONESIA: Next week could be key in effort to bring down cases

MYANMAR: Could the generals’ pariah status lead to a humanitarian crisis?

PHILIPPINES: Duterte looks first to his succession plans, not legacy

INDONESIA: Widodo announces wider restrictions over half the country