This week, the Malaysian government expanded the coverage of its movement restrictions to nine of the country’s 13 states and took the further step of closing schools — reflecting the concerns of the only Southeast Asian country that has seen a recent and marked increase in new Covid-19 cases. It is also making it difficult for the government to call early elections despite the uncertain status of Prime Minister Muhyiddin Yassin, because the state election in Sabah at the end of September is now viewed domestically as having contributed to the recent spike.

But Malaysia is the region’s exception for now. Elsewhere, countries are taking gradual steps to further relax restrictions. Even the Philippines and Indonesia, which have found it difficult to bring down domestic transmission to the near-zero levels achieved by their peers, are steadily moving towards reopening. Since June, restrictions on workplaces and public transportation have been eased across the region, albeit at different rates (Vietnam the fastest and the Philippines the slowest); essential businesses can operate at full capacity in most countries. In almost all Southeast Asia, domestic travel is now also possible, except for the Philippines, where inter-provincial travel is cumbersome and requires testing and police clearances.

One driver of confidence is that Southeast Asia did not have the explosive outbreaks experienced elsewhere in the world, despite the uneven capabilities throughout the region, its dense population centers and the high levels of travel between its member economies and China. While this was attributed to the quick governmental response in Thailand, Vietnam and Cambodia, as well as the advanced healthcare system of Singapore, the reason is less clear for Indonesia, Myanmar and the Philippines—three countries with weak institutions and limited healthcare capacities. Local speculation about why the three fared relatively well ranges from warm temperatures and the predominance of natural ventilation in most homes to demographics, possible cross-immunity and adherence to social distancing rules, but not have been proven. 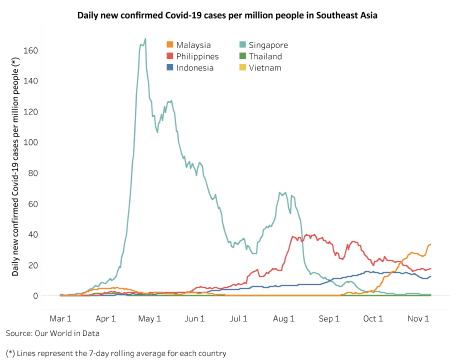 Throughout the region for the next few months ahead of vaccine deployment, three areas will continue to be managed by policymakers to avoid a resurgence.

Google’s mobility data on the Philippines and Indonesia show retail and recreational foot traffic in Jakarta and Manila that are substantially lower compared to other regional centers. This likely reflects how their citizens remain wary of remaining in public places for long and contracting the disease because of persistent community transmission. For the Philippines, its weak mobility profile is likely exacerbated by stringent rules that include prohibitions on those below 15 years old and above 60 years old from going to the malls or to restaurants, as well as the continued closure of cinemas — all of which discourage families. This may allow for some catch-up recovery in the Philippines should it align with regional practices.

The following chart shows retail and recreational traffic in the major cities compared to the pre-Covid baseline. 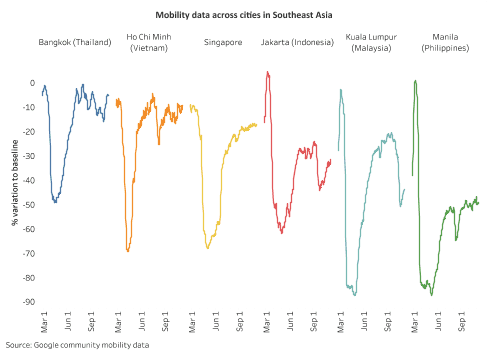 The contrast can be seen in Thailand and Vietnam, where retail foot traffic recovered after the virus had been brought under control and restrictions were eased. Singapore had to deal with a mishandled outbreak in its migrant worker population but is now confident it has the situation under control. Malaysia’s progress has been set back by its recent spike. These countries believe they can effectively respond with calibrated measures should a resurgence occur, and throughout Southeast Asia governments have enough political capital to pursue lock downs in worst-case scenarios. Singapore therefore plans on transitioning to what it calls Phase 3, which would further increase the allowed size of public gatherings to eight people and, later, possibly even allow nighttime entertainment. Gatherings in public venues for events such as weddings may eventually be allowed to have more than 50 people as long as they are maintained in different zones.

Policymakers may also attempt to shift public expectations away from full eradication of Covid-19 until a vaccine arrives to tolerating some local transmission as their economies reopen, with the assurance their healthcare systems are ready to contain any nascent resurgence. This is already happening in Singapore. Thailand could be next although even limited cases can still spark fear; however, there is already some domestic criticism that policymakers are allowing unrealistic and economically difficult zero-case expectations to continue.

INDONESIA: Next week could be key in effort to bring down cases

MYANMAR: Could the generals’ pariah status lead to a humanitarian crisis?

PHILIPPINES: Duterte looks first to his succession plans, not legacy

INDONESIA: Widodo announces wider restrictions over half the country