In this updated weekly piece, we provide snapshots of how selected European governments are dealing with the ongoing Covid-19 pandemic. Please do not hesitate to contact us if you want to discuss any of the countries mentioned in more detail. 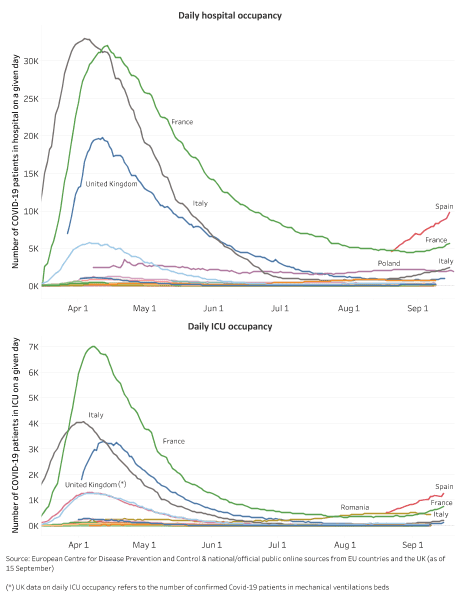 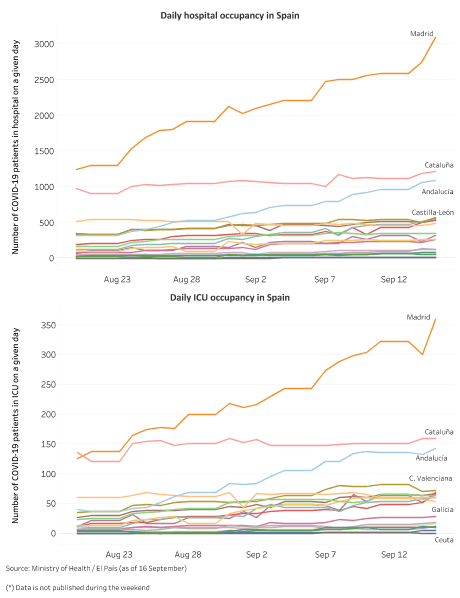 – The PSOE-Podemos government is likely to prolong the current furlough scheme until 31 January. However, the final details of the extension are currently being negotiated with trade unions and employers.

– The government is also considering prolonging the “banning” of dismissals for causes directly linked to the pandemic. In practice, this would mean that firms would have to pay higher firing costs when trying to lay off workers because of the adverse effects of Covid-19 on their activities.

– 42 provinces (out of 101) have been classified as “highly vulnerable” to the virus as nationwide daily cases hover around 10,000. However, rather than taking nationwide measures, the government will continue pressuring the worst-affected municipalities to impose more stringent constraints to contain the spread of the virus (as Bordeaux and Marseille have done in the last 72 hours).

– Prime Minister Jean Castex has asked French firms to make extensive use of the new “long-term” furlough scheme by signing agreements with workers before 1 November. Under this mechanism, employers and workers can reach deals to reduce working time up to 40% for a period between six and 24 months, and furlough workers receive 93% of their salary

– Around 40% of respondents to a recent opinion poll said they would reduce their expenses in the coming months despite data showing that income levels have been relatively preserved during the lockdown period thanks to the government’s furlough scheme.

– The daily number of new infections keeps hovering around 1,500 but has not gone back beyond 2,000 cases since the second half of August.

– In a sign of the relative confidence regarding the pandemic situation, regional states and the federal government have decided that football stadiums can be reopened at 20% capacity when the new Bundesliga season starts this coming weekend.

– The cost of the medical response so far has created a hole of some EUR 16bn in public health insurance funds; to tackle it, the government will increase its regular contribution by EUR 5bn and tap the funds’ reserves (currently at EUR 21bn). This will limit social security contribution increases to 0.2 percentage points, maintaining their overall level below 40%, as promised, for almost all contributors.

– Daily new infections remain around the mark of 3,000 cases, continuing to cast doubts over hopes for a quick resurgence of economic activity.

– At the same time, there is concern about the ongoing weaknesses of the testing system as people return to work, including a lack of kits and long waiting times for results; such institutional capacity issues could complicate efforts to fight the virus with local restrictive measures.

– The furlough scheme is still expected to run out at the end of October. But within the Conservative party, the political debate continues about further support for those likely to lose their job once support schemes are coming to an end.

– The number of Covid-19 infections continues to rise, with the seven-day average of new cases reaching around 2,800 – still the highest figure in CEE excluding Russia. The most affected areas include the capital Kyiv and south-western regions of Chernivtsi, Ivano Frankivsk, Lviv, and Ternopil.

– The government’s “adaptive quarantine” scheme divides the country into four epidemiological zones based on the testing and incidence rates, and hospital bed capacity criteria. Around 70 of the country’s regions – including the capital Kyiv – are currently in the “orange zone,” which mandates the suspension of all planned hospitalizations and partially restricts several activities. Meanwhile, another 34 regions are in the “red zone,” requiring complete closure of schools, public transport, restaurants, shopping malls, and other activities.

– Political tensions are on the rise between the central government and regional administrations, some of which demand compensation for losses incurred due to the mandatory economic restrictions.

– The seven-day average of new daily infections increased by around 50% to 677, while the death count from Covid-19 more than doubled during the past week. As a result, the government has reintroduced a nationwide ban on hospital and retirement home visits, stepped up compliance checks with existing sanitary measures. It is also rolling out mandatary body temperature checks in schools.

– The cabinet is contemplating additional economic support measures but has not provided any details so far. Keeping the economy and public services running is the key government priority, according to Prime Minister Viktor Orban.

– Unlike in spring, the introduction of a controversial “state of danger” allowing the government to rule by decree is unlikely. Orban has ruled out another nationwide lockdown, given that the move would not serve any immediate political goals.