SOUTHEAST ASIA: The politics of opening up to foreign tourists

Despite news of Thailand possibly allowing tourists into Phuket this October and Singapore now operating travel bubbles with New Zealand and Brunei, the reopening of Southeast Asian broadly to international visitors will be uneven and unpredictable into early next year, even between neighboring countries that have for several weeks registered no or very limited community transmission and are able to track down new imported cases effectively. Generally, except with some exceptions by Singapore and some possible leakages into Cambodia from China, all countries in Southeast Asia remain closed to short-stay foreign tourists.

Unlike the EU with its Schengen area, there is no commonality in cross-border travel policy at the level of the Association of Southeast Asian Nations (ASEAN). The pace at which individual countries open to tourism will therefore likely be the result of reciprocity, changes in domestic perceptions of risk, and the demonstration effect from regional leaders such as Singapore, Hong Kong and Taiwan.

Two factors drive the uncertainty about travel policies. The first is the governments’ still cautious approach towards the outlook for the coronavirus outbreak, such as whether infections will flare in the coming winter or the potential effectiveness and availability of vaccines. Related to this is the second challenge, which is the political difficulty in shifting public expectations away from the over-weighting of policy towards the goal of having zero or near-zero daily community transmission.

The latter is often unmentioned as a hard, formal target. But the success of Thailand, Vietnam, Malaysia and even Cambodia in bringing domestic transmission down to zero appears to have engendered the view among their publics — and consequently with their respective governments — that any resurgence will be seen politically as a failure of existing policy and an increase in risk. This was evident in Thailand last July when a foreign military officer transiting through the country who was positive for Covid-19 broke quarantine before his test returned. In the succeeding days, the incident received national media coverage, all highlighting the negative effects of failure to follow quarantine rules and the risks it created for Thailand. The closure of schools, hotels and malls in the province of Rayong, where the incident took place, were widely reported while flights from Egypt were banned.

Meanwhile, in countries that continue to deal with new cases, such as the Philippines and Indonesia, the experience of their more successful counterparts in Southeast Asia has also generated domestic aspirations of zero or near-zero domestic transmission. This will lead to fluctuating policy government, which will adjust to how the public sees the risks from further opening their respective economies. 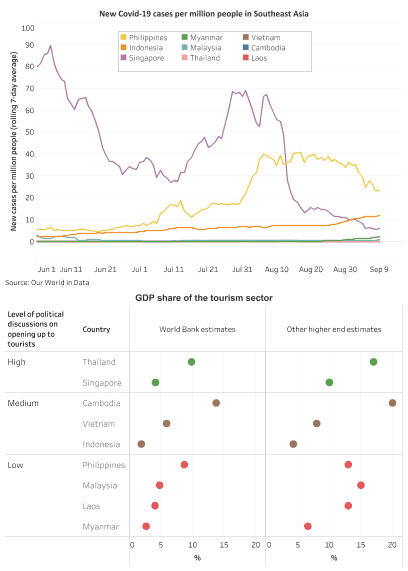 Generally, the rule in much of ASEAN is that only citizens and long-term residents, their families, and some exempted categories such as diplomats, workers and business, technical, and investor visa holders can enter. But several country initiatives that have started in the past few weeks could become the basis for further easing up, depending on the individual country experiences.

The first is Singapore. The city-state will likely open its doors, even if selectively, faster than the other major economies. Not only is this informed by its outward orientation, but it has the governmental capacity and technology to track down new cases, needs imported workers in some sectors, and has cross-border labor ties with Malaysia. This week, it implemented a travel pass system for visitors from New Zealand and Brunei. Arrivals from the two countries will not be required to undergo any quarantine, as long as they agree to a test upon arrival and the use of the government-developed TraceTogether app. Singapore is also shortening its quarantine period for visitors from Taiwan, Australia, Malaysia, Macao, China, and Vietnam. Singapore stumbled in its handling of migrant workers several months ago, leading to an increase in local cases, but these missteps are more the rule than the exception. The challenge for the rest of the ASEAN is that several unique conditions exist in Singapore, from the size of the territory to the availability of resources and expertise, that may make the immediate adoption of its lessons difficult in the rest of the region.

The second are Thailand and Vietnam. Vietnam is considering allowing tourists to fly in from Guangzhou, Seoul, Tokyo, Taipei, Phnom Penh, and Vientiane by October. However, travelers from these cities will still have to undergo a 14-day quarantine. Bangkok may also pursue a plan to first reopen Phuket under a very conservative scheme, where visitors would stay at least 14 days in a resort and move only within a certain radius or to other resorts within their bubble. If they exceed 14 days in the country and are negative for the virus, then they can travel elsewhere in the country. The initial inward flows under these arrangements would barely register (and Vietnam may give preference first to business travelers). Also, there is skepticism that they will prove to be successful in time for the western winter holiday travel when places such as Phuket and Bali attract high tourist flows from Europe and North America. Indonesia is also looking at allowing a similar arrangement for Bali, but unlike Thailand and Vietnam, its high level of local transmission generates significant uncertainty in its ability to follow through with reopening plans.

However, even the small steps may encourage the development of reciprocal privileges that would ease intra-regional travel. For instance, one possible evolution of the country-level policy to a wider regional benefit is to allow a tourist who has undergone Thailand’s quarantine scheme to enter Vietnam with a test but no further quarantine requirement as long as Thailand has not had any significant community transmission during his or her stay, and vice versa. This would require a certain degree of trust in the internal processes of the participating countries, however, and work only between countries able to reciprocate the same level of confidence in their virus controls.

MALAYSIA: With politics in dire straits, sultans could swing sentiments

INDONESIA: Finance wants to raise the VAT rate but will face stiff opposition

SOUTHEAST ASIA: An important month ahead for the continental countries

MYANMAR: Still at square one, even after ASEAN summit