n this updated weekly piece, we provide snapshots of how selected European governments are dealing with the ongoing Covid-19 pandemic. Please do not hesitate to contact us if you want to discuss any of the countries mentioned in more detail. 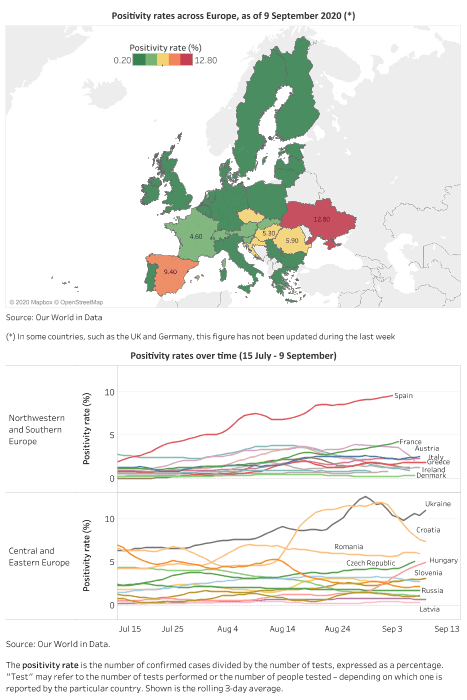 Covid-19 cases are rising again in most European countries as social and economic activities partially resume after the summer break. Rising positivity rates in countries such as Spain, France, and most recently, the UK suggest that the increase in Covid-19 cases is not just the result of more testing. Against this backdrop, governments might impose new measures in the days ahead, including localized lockdowns and restrictions on social gatherings. However, a return to nationwide lockdowns remains unlikely as long as hospitals do not become overwhelmed.

– A 7 September decree extended existing anti-Covid-19 measures for another month. Masks remain compulsory in public places, including in some outdoor areas between 6pm-6 am.

– Schools are reopening on 14 September with stringent guidelines, but there is a lot of uncertainty and mistrust toward the government’s ability to handle the matter. Six regions have already unilaterally postponed the reopening to 24 September.

– The government has identified the initial guidelines for the plan that aims to qualify for the EUR 209bn that Italy should get from the EU’s Recovery Fund. The six “macro-missions” are: digitization and innovation, ecological transition, health, infrastructure; education and research, and social and territorial inclusion.

– The number of daily cases has stabilized above 9,000. The army has trained 2,795 human contact tracers that will be made available to the 12 regions that have asked for support from the central government. New restrictions on social gatherings are being approved this week by several regions.

– The PSOE-Podemos government has unveiled plans to potentially repeal some of the labor market reforms adopted in 2012 by the previous conservative administration. Rather than unilaterally pushing for the changes, however, the government is expected to negotiate them with the trade unions and employers.

– Discussions to extend state support for furlough schemes expiring on 30 September have started this week. Employers are pushing to extend the scheme until Easter for specific sectors only, while trade unions want to apply them to all firms negatively affected by the pandemic.

– With daily cases hovering around the 7,000-9,000 range, 28 departments (out of 101) have been classified as “highly vulnerable,” which allows them to impose restrictive measures. The scientific committee that advises the government has recommended bringing the number of days infected individuals need to spend in quarantine down from 14 to seven.

– The government has signaled that the furlough scheme for those sectors particularly affected by the Covid-19 pandemic will be in place until next summer.

– From an economic standpoint, the next big signpost is the draft accounts for 2021 to be adopted before the end of the month. The budget will implement some of the measures included in the government’s “Relaunch” plan announced last week.

– The daily number of new infections remains below its interim peak of more than 2,000 cases in late August, pointing to a currently stable rather than exponentially worsening situation.

– New estimations predict revenue shortfalls, underlining the rising fiscal cost of the pandemic; the constitutional “debt brake” will likely be suspended for another year in 2021.

– Several regional states are insisting that the auto industry must not be disregarded again in any new round of economic support measures, but Chancellor Merkel remains reluctant amid the political importance of climate concerns.

– The daily number of new infections has been continuing its upward trajectory, briefly crossing the mark of more than 3,000 new cases in one day.

– The government has reacted with the introduction of new, toughened social distancing rules, including a “rule of six” banning larger social gatherings.

– While pubs and restaurants will be obliged to collect customers’ personal data for tracing purposes, hospitality lockdowns are for now being kept to the local level; however, envisaged experiments with reopening venues with larger crowds have been delayed.

– Despite a month-long ban on foreign visitors enacted on 29 August, the country has the highest seven-day average of new Covid-19 infections (around 2,500) in Central and Eastern Europe (excluding Russia). There is growing concern about the lack of hospital beds in some regions.

– Prime Minister Denys Shmyhal has ruled out a broad-based lockdown, while the country’s “adaptive quarantine” foresees regional-level restrictions on public and economic activities. Kyiv mayor Vitaliy Klitschko has hinted at a potential public transport closure if the epidemiological situation continues to deteriorate.

– The seven-day average of new infections reached 435 on 9 September. This surge is likely associated with the four-day holiday weekend on 20-23 August and a significant jump in testing. The hospitalization rate is low as the median age of infected has declined considerably compared to the “first wave” in spring.

– The government did not extend its wage supplement program for distressed enterprises beyond 31 August. Companies that have applied until this date are eligible for three-month support.

– The authorities will seek to prevent another shutdown of economic activities, especially manufacturing. However, tighter sanitary measures and restrictions on other public activities are likely.