EUROPE: The politics of new outbreaks

In this piece, we provide an overview of how selected European governments are dealing with new coronavirus outbreaks. Please do not hesitate to contact us if you want to discuss any of the countries mentioned in more detail.

Italy was the first European country to be engulfed by the coronavirus pandemic, but it has managed to avoid a resurgence of infections since it began easing lockdown restrictions on 4 May. In early May, more than 1,200 new cases were reported daily. Since 1 July, the daily increase has been relatively static, reaching a high of 382 and a low of 159. The few clusters that have emerged have mostly been due to infections imported from abroad.

Last week, Parliament voted to extend the government’s emergency powers through 15 October. Opposition parties had objected, accusing Prime Minister Giuseppe Conte of trying to keep too much power in his own hands despite a dramatic fall in the rate of contagion. Emergency powers allow the government to keep restrictions in place and respond quickly – including with lockdowns – to any new clusters. A new stimulus package worth EUR 25bn will be unveiled shortly to provide further financing to existing shock-absorbing initiatives (including an extension to the furlough scheme), incentives to hire new employees, and support for schools to reopen in September.

Data released on 4 August showed a 30% weekly increase in cases. The emergence of new outbreaks in the last couple of weeks has exposed the capacity limitations of some of the country’s regional governments to deal with the pandemic. For instance, it has recently been revealed that the country has less than half of the human contact tracers needed to deal with new outbreaks effectively. Catalonia and Madrid – two of the worst-affected regions – had at the beginning of July approximately one tracer for every 30,000 inhabitants, well below the ratio that is considered adequate to contain the virus. At the same time, the central government recently announced that its contact-tracing app would be deployed on 15 September. Moreover, the army is reportedly training contact tracing personnel, which could be supplied to regions in specific cases.

In any case, the central government is unlikely to reimpose a nationwide lockdown anytime soon, as Sanchez is wary of adopting decisions that would inflict further harm on certain economic sectors, such as tourism. The collapse of the economy in Q2 (-18.5%) has raised renewed concerns about the negative impact of the pandemic on the jobs market. Labor minister Yolanda Diaz recently signaled that the government was considering prolonging the existing furlough scheme until the end of the year (the current arrangement expires on 30 September).

The last week has seen a 54% increase in weekly Covid-19 cases, with the number of patients in intensive care increasing for the first time since April. However, the government has said that a nationwide lockdown would only be reimposed as a last resort. The scientific committee advising the government has suggested the country’s biggest municipalities should prepare plans to introduced localized lockdowns in the event of a second wave. An increasing number of municipalities are making the wearing of face masks compulsory in outdoor public spaces (the central government already impose the obligation to wear face coverings in indoor public spaces last month). The country’s contact tracing system seems to be working well, but the sudden increase in the number of individuals wanting PCR testing ahead of summer holidays is creating some bottlenecks, with some people having to wait a week to be able to be tested.

On the economic front, the government of President Emmanuel Macron has decided to accelerate the preparation and adoption of its “Relaunch” initiative. Economy Minister Bruno Le Maire is now expected to announce the details of the plan on 24 August instead of September as initially planned. The overall envelope of the government’s Relaunch plan is expected to be around EUR 100bn, with EUR 40bn devoted to the “reindustrialization” of the French economy and EUR 30bn to be invested in “greening” the country.

Physicians’ associations are speaking of a second wave as daily rates of new infections have been on the rise again (879 new cases were reported on 4 August). Medical and political responses are being organized in an even more decentralized manner than during the initial phase: local health authorities are managing the multiple local outbreaks; the 16 regional states differ in their regimes regarding masks, testing, and school reopenings; a reserve of hospital beds and ventilators is now available and would be provided in a staged approach, rather than in the big one-off effort seen in March. Meanwhile, travelers returning from high-risk areas will be tested in airports.

In short, the experience with the management of the initial outbreak creates relative confidence in the authorities’ ability to keep responding appropriately. The logic of political competition for the Merkel succession supports this: Bavaria’s leader Markus Soeder continues to lead the race, increasing the pressure on other regional state leaders to follow his careful approach of large-scale testing, binding facemask requirements and canceled public events. With regional leaders firmly in charge, Chancellor Merkel will likely keep a low profile – unless and until larger-scale measures were to be required again. In the meantime, the most significant risk from the efficient response during the initial outbreak is public complacency. As the country experienced a comparably limited crisis back then, anti-lockdown demonstrations and mask fatigue could complicate the response this time around.

There has been a steady rise in the number of coronavirus cases in Greece over the last few weeks, prompting authorities to reintroduce some restrictions and put the public health system on alert. During the last week, Greece recorded 472 new cases, which is 146 cases more than the cases recorded in the entire month of May. Whereas earlier this summer many of the cases were the result of random tests on tourists, “imported” cases are now a minority, which indicates the virus is spreading within Greece. On 29 July, the use of masks was made compulsory again for employees and members of the public in most indoor places. The government had already made wearing a mask obligatory in supermarkets a few days earlier.

The rise in coronavirus cases, coupled with the fact that the number of tourists visiting Greece so far has been lower than authorities hoped, means that the government is looking at how it will be able to support local businesses again this fall after already adopting more than EUR 20bn in stimulus measures. A new package worth around EUR 4.5bn, which will include further tax breaks and job subsidies, is in the pipeline.

The country is experiencing a resurgence of Covid-19 cases. During the past week, the number of new infections averaged 606 per day, compared to 446 during the preceding seven days. The resurgence is associated mostly with outbreaks in large companies and mines. There have been reports of new infections spreading after mass events such as weddings with guests from abroad. Public adherence to sanitary guidelines – which include mandatory masks in shops – has been relatively lax in recent weeks. As a result, the government plans to increase new police check-ups, provide a legal right for retailers not to serve customers without face coverings, and introduce mandatory registration of wedding guests. The health minister also hinted at mandatory testing for those returning from abroad.

The country has seen a slight uptick in new cases during the past few weeks but managed to avoid new major outbreaks. Currently, there are 540 active Covid-19 cases with the daily count of new infections averaging around 14 during the past ten days. To keep the situation stable, the government has been stepping up testing and extended restrictions on concerts with more than 500 people. Protective masks in most indoor places are mandatory, and compliance appears to be relatively high. However, with the resurgence of Covid-19 across the CEE region, “imported cases” could become a source of new outbreaks. As a result, the government is regularly reviewing the “color-coded” list of countries for restrictions on foreign arrivals. 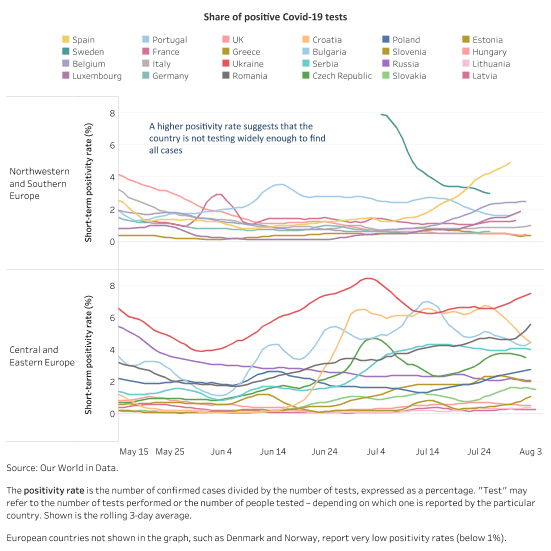 CENTRAL ASIA: Implications of the Taliban takeover in Afghanistan

( 4 mins) Concerns over security and uncontrolled migration have led to inconsistent and uncoordinated reactions from Central Asian governments to the Taliban coming to power in Afghanistan. Multiple risks stemming from the uncertain political outlook in Afghanistan

FRANCE: State of the presidential race

( 4 mins) With around 200 days to go to the 2022 presidential election, no credible challenger to the Emmanuel Macron-Marine Le Pen duopoly has yet emerged. The key factor to watch remains whether the center-right can rally

( 5 mins) Political and epidemiological crises are deepening in Bulgaria. In Romania, a dispute within the three-party coalition government over the local infrastructure investment program will likely lead to the replacement of the Prime Minister Florin Citu.

( 6 mins) A limited cabinet reshuffle aimed at leaving the wildfire damage behind has become a source of embarrassment for the ruling party as a newly-appointed minister declined the job. A new pandemic wave in the Fall