On 23 August, the general allocation of SDRs equivalent to USD 650bn agreed by IMF members earlier this month takes effect. While this is by far the largest general SDR allocation to date, shares due to countries across sub-Saharan Africa (SSA) remain grossly inadequate compared to the region’s external financing needs. The corresponding debate on how rich countries can top up poor countries’ allocations by voluntarily sharing’surplus’ SDRs has yet to produce tangible results. The IMF’s established Poverty Reduction and Growth Trust (PRGT) may eventually become the main vehicle for this exercise. The genesis of the G20’s Debt Service Suspension Initiative (DSSI) and the Common Framework for Debt Treatments suggests it may prove difficult to obtain the required consensus for more innovative concepts.

SSA’s 48 countries represent a cumulative 3.6% of the IMF’s quota share and will therefore receive a cumulative SDR allocation equivalent to about USD 23.4bn. Allocations are unevenly spread across the region, with Eurobond issuers South Africa, Nigeria, Zambia, and Angola receiving the largest shares, each in excess of USD 1bn (see table). 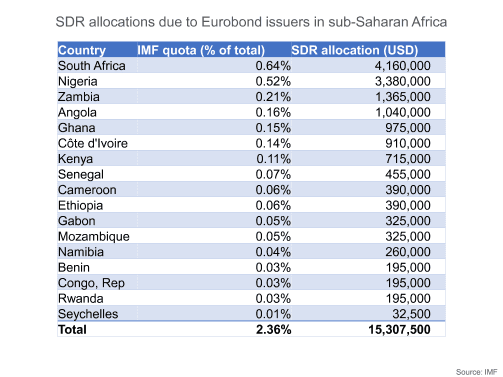 While this is the largest general SDR allocation to date, the USD 23.4bn allocation to SSA remains grossly inadequate. In October 2020, the IMF estimated the external financing gap of Africa (including North Africa) at USD 1.2trn through 2023.

Against this background, a debate emerged earlier this year about how rich countries could top up poor countries’ allocations by voluntarily sharing ‘surplus’ SDRs, with both the G7 and the G20 calling upon the IMF to develop respective policy options. However, while the general SDR allocation will go ahead on 23 August, the IMF is still “exploring a number of proposals for voluntary SDR channeling that various stakeholders have put forward, and we plan to discuss a menu of options with our Executive Board this summer.”

The IMF articles of agreement would allow for bilateral transfers of SDRs, yet there appears to be a clear preference at least among G7 and G20 members for a collective approach, with the IMF acting as a go-between. This is likely aimed at avoiding a destructive’arms race’ in which geopolitical adversaries such as the US and China’supercharge’ their respective allies in frontier and emerging markets with their surplus SDRs. G7 and G20 calls on the IMF to improve transparency around the SDR scheme also hint in that direction.

In their 13 June Carbis Bay declaration, the G7 specifically mentioned African countries and called for an upscaling of the Poverty Reduction and Growth Trust (PRGT), thereby setting a “total global ambition of USD 100bn” for the voluntary redistribution of SDRs including “contributions from other countries able to do so, alongside the G7.” References to Africa or the PRGT are notably absent from a subsequent declaration of G20 ministers of finance and central bank governors. However, both communiques share a view that the redistribution exercise should also be used as an opportunity to “enable greener, more robust” (G7) or “resilient, inclusive and sustainable” (G20) economic recoveries, with the G20 advocating for the establishment of a dedicated new trust fund.

The G7’s emphasis on the tried-and-tested PRGT is understandable as it ensures better oversight and includes conditionality; however, the amount that countries can borrow through the trust is quota-based, and many countries have already reached or were nearing their respective limits last year. While the IMF in 2020 did temporarily raise annual borrowing limits from 100% to 150%, a further, potentially permanent expansion may undermine trust in the scheme’s financial soundness.

Moreover, access to PRGT resources is essentially restricted to low-income countries, i.e., another facility would be needed to channel surplus-SDRs to emerging market countries, which may help explain the thrust of the G20 statement. However, the IMF would enter uncharted territory here as eligibility and consistency criteria would need to be developed from scratch, for instance, for a proposed Resilience and Sustainability Trust. Supporting ‘green recoveries’ would dovetail with the US/G7’s Build Back Better ethos and a trend towards green and social bond issuance. However, it would be quite a stretch to the IMF’s core mandate, which to date remains focused – at least in theory – on providing temporary assistance to resolve balance of payments problems.

While this may provide an opportunity to the IMF to reinvent itself once again and further expand its regional footprint, recent experience with the creation of the DSSI and the failure of the Common Framework to take off quickly have demonstrated that multilateral pandemic crisis management tends to revolve around the lowest common denominator. As such, rather than rapid action on either the PRGT or a new sustainability trust, chances are that ongoing discussions could drag on for months to come without arriving at a comprehensive mechanism for a sizable SDR redistribution.