EU: The external and internal politics of vaccination challenges

Figures published last week show that the EU has exported a significant number of jabs since the beginning of the year, in contrast to the UK and the US. Give ongoing vaccine shortages in the EU, this has increased the pressure on Brussels. Ahead of the 26-27 March European Council meeting, the European Commission has proposed to beef-up the so-called export information mechanism in place since late January. The envisaged expansion would allow the EU to halt deliveries to countries that are themselves blocking exports, as well as to any recipient country that is doing better than the EU in terms of vaccination.

This is aimed at the UK, which, unlike the US, has never passed any export controls. Instead, the UK’s strong vaccination record is down to its fast negotiations with pharma companies, including AstraZeneca (AZ). Amid globally still limited production capacities, the UK is now reaping the benefits of ordering vaccines when it was still unclear how well they would work (a risk the EU instead tried to hedge against in lengthy talks over liability). In return, the UK gets treated as a preferential customer, as reflected by the introduction of the “UK-first” clause in the contract with AZ.

The Commission is considering addressing its laggard status by potentially stopping even those exports made by producers complying with their EU delivery schedules. But whether such an escalation has the backing of all member states is yet to be seen. North European states, including Germany, still seem to be skeptical, not least given fears of further disruptions to global supply chains. The export control mechanism does not require new EU law, but member states and the Commission will have to coordinate on granting every individual export permission. A streamlined application, therefore, depends on political consensus at this week’s Council.

The UK-EU rift over vaccine exports comes at a difficult time for the EU. Divisions among EU members over the bloc’s handling of vaccination procurement and distribution program have deepened in recent weeks. Moreover, the perceived safety of the AZ jab has worsened in recent weeks. This week, most EU capitals – apart from the Nordics – have resumed the rollout of the AZ vaccine after the European Medicines Agency (EMA) concluded on 18 March that it was safe. But not all countries are following the same delivery guidelines. While in France, the authorities have recommended administering the jab only to over-55s – reversing a previous decision – in Spain it is only administered to under-65s. Therefore, after weeks of contradicting messages, governments will have a hard time rebuilding trust in the AZ jab. As the graph below shows, many of the AZ vaccines currently available have not been administered; countries have been more successful at rolling out available doses of the Pfizer-BioNTech vaccine. 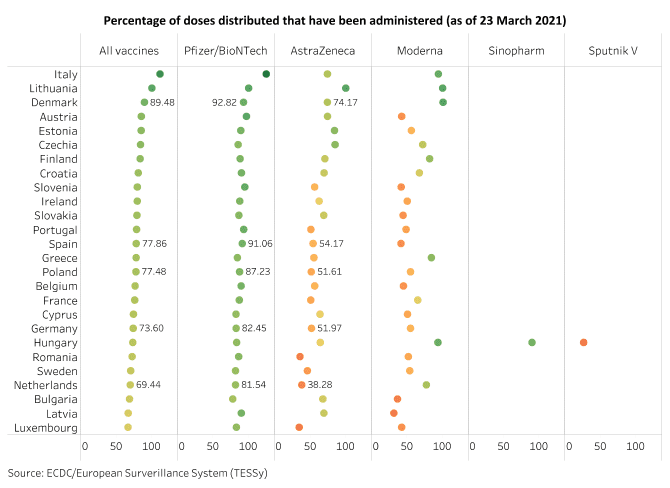 At the domestic level, governments are suffering the flaws of their vaccination campaigns. In Germany, Chancellor Angela Merkel’s CDU/CSU alliance is losing support in the polls ahead of the September elections. The graph below shows that only 35% of Germans are satisfied with the government’s handling of the pandemic – the lowest figure since March last year. Satisfaction with the management of the pandemic is also at its lowest in Italy, Sweden, Denmark, and Finland, while it remains low in Spain and France. In contrast, UK citizens are increasingly supportive of the government’s actions following its successful vaccine rollout. 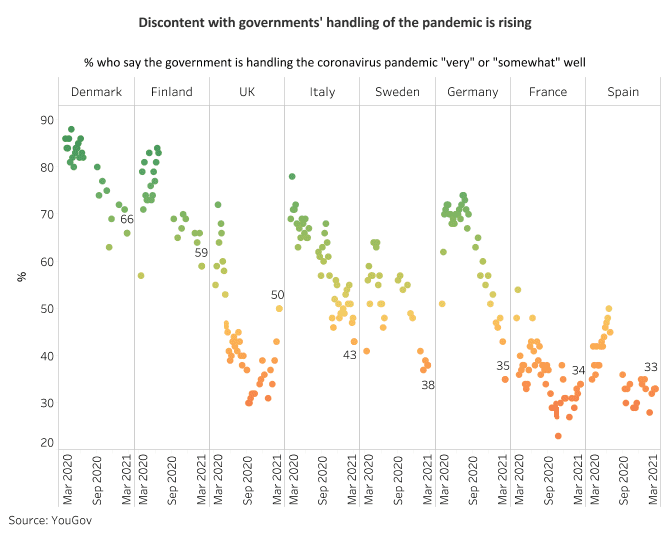 The public discontent with sluggish vaccinations, and the increasing pandemic fatigue, mean that EU capitals are treading carefully when imposing new restrictions to counter the recent surge in cases. For instance, France has approved new measures for its worst-affected regions that in practice entail a marginal change vis-à-vis the restrictions already in place. In Germany, Merkel has been forced to reverse a decision to impose a lockdown over Easter. In Spain, the central government is proposing to tinker with the existing restrictions rather than adopting new nationwide measures.

Most governments are still betting on a substantial acceleration of their immunization campaigns in Q2, given the expected increase in jab supplies. Until that materializes, governments will probably refrain from either lifting the restrictions in place or imposing stricter measures – unless hospital capacities were to come under significant stress again. Therefore, the two key factors to watch are pharma companies’ announcements about their ability to deliver on their supply commitments, and any potential issues on the demand side, such as health authorities struggling to get individuals to sign up for vaccination appointments.

On the economic front, governments are equally unlikely to lift crisis support measures until the prospect for widespread resumption of business activities becomes clearer. As a result, most furlough and subsidies schemes are likely to remain in place throughout the summer, which will have an added impact on member states’ coffers. As an example, the French government has estimated that the extension of its support measures due to the prolonged restrictions will cost the state EUR 1.2bn a month.

FRANCE: Macron lays out re-election plan – what to watch