Our Eurobond Political Risk Monitor, presented in the attached table, provides a go-to guide of the main political and policy issues in 17 sub-Saharan African (SSA) sovereigns that have issued Eurobonds as of January 2021. In this edition, our ‘Spotlights’ section assesses the risk of debt distress facing SSA Eurobond debtors as the Covid-19 pandemic enters its second year.

While Zambia remains the only pandemic-era default case thus far, the IMF considers six countries in debt distress (including Eurobond debtors Congo-Brazzaville and Mozambique) and 11 (including Cameroon, Ethiopia, Ghana, Kenya) at high risk of debt distress. However, hopes for a new round of debt relief seem modest compared to the HIPC initiative of 20 years ago, even though the G20’s Debt Service Suspension Initiative (DSSI) covering official debt will likely be extended beyond the first half of 2021. The DSSI remains a short-term suspension and is unlikely to evolve into a broad debt forgiveness scheme.

Even less certain is the extent to which Chinese lending institutions will participate and whether the new ‘Common Framework for Debt Treatments beyond the DSSI,’ which envisages private sector participation, will offer a blueprint for the effective, speedy resolution of debt crises. While the Framework ought to be tested on the region’s first defaulter, Zambia, Chad and Ethiopia last week became the first countries to signal their intention to seek restructuring under the G20 framework. Yet the form that any debt treatments will take is still highly uncertain, beyond basic principles outlined by the G20 (including burden-sharing among all types of creditors).

Another shortcoming is that the DSSI does not cover upper middle-income countries. Yet debt trajectories are at least as troubling (if not worse) in countries like South Africa and Namibia as they are in many low-income countries. In South Africa, the Covid-19 pandemic has dealt a massive blow to a stagnant economy and steadily deteriorating fiscal metrics, which will be on display in Finance Minister Tito Mboweni’s February budget. Not only does South Africa need to deliver budget savings (primarily on the public-sector wage bill), but its fragile recovery prospects face a host of downside risks including the pandemic, electricity shortages, reform delays and risks around a slow vaccine roll-out.

Indeed, for the region as a whole, the vaccination outlook will be one crucial driver of the region’s economic recovery outlook and debt trajectory. The economic recovery currently forecast by the IMF for 2021 (+3.1% GDP growth on average, with substantial variation) would merely bring the region back to its subdued post-2015 growth trajectory. Still, it remains fraught with downside risks such as further pandemic waves on the continent or elsewhere, as well as slow vaccine procurement and rollouts. In fact, while the region has not borne the brunt of the pandemic thus far, particularly in terms of fatalities (a picture that could change), a key concern is that Africa will be at the back of the queue in the global scramble for vaccine access, giving rise to global ‘vaccine apartheid’. To date most countries are heavily reliant on the COVAX initiative. The African Union (AU)’s African Vaccine Acquisition Task Team (AVATT) reportedly has 270mn vaccine doses in the pipeline, but most of these are only expected in H2/2021. Yet with an estimated 1.5bn doses needed to vaccinate about 60% of the 1.3bn population, the Africa Centers for Disease Control and Prevention (Africa CDC) has warned that the virus risks becoming endemic if the vaccination process ends up taking 4 to 5 years. Adding the need for additional vaccine funding and further economic disruption, already-poor fiscal positions are likely to deteriorate further and drive the rise in domestic and foreign debt accumulation. And with the bulk of SSA Eurobonds maturing around the mid-2020s, many countries in the region seem to be building up to a multi-year debt sustainability crisis. 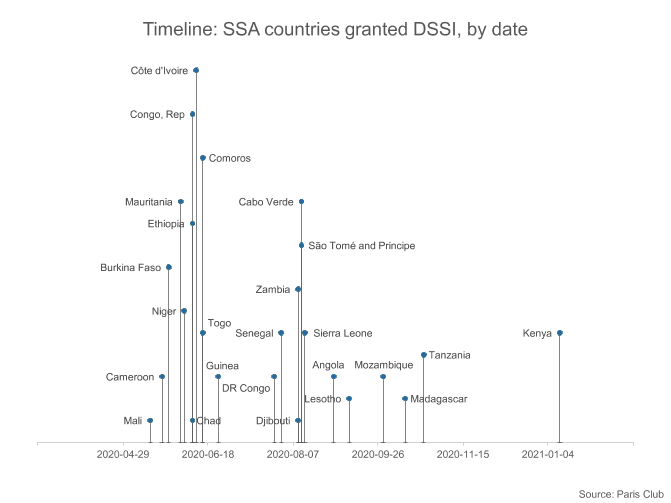