With record infections and excess deaths, the pandemic is taking a heavier toll than it did during the July 2020 peak. For the first time it has claimed a cabinet minister’s life. Jackson Mthembu, former minister in the Presidency, was the third most important figure in the government’s Covid-19 fight, after Ramaphosa and Health Minister Zweli Mkhize. This makes a cabinet reshuffle urgent, though Ramaphosa may want to avoid any moves ahead of the budget (likely on 24 February), given concerns over Finance Minister Tito Mboweni’s tenure.

Late to the vaccine scramble

Speaking at the World Economic Forum (WEF) on 26 January, President Cyril Ramaphosa appealed to rich nations to release “hoarded” Covid-19 vaccines. Late to the vaccine scramble, Ramaphosa’s administration is desperately trying to assure the public that 30mn vaccine doses are in the pipeline, “mainly” in H1/2021. The target is to vaccinate 40mn South Africans (67% of the population) by end-2021. To achieve this, South Africa is heavily reliant on COVAX, from which it currently expects up to 12mn doses (with first deliveries starting in February). It also expects 12.25mn doses from the African Union (AU)’s African Vaccine Acquisition Task Team (AVATT), but only about 2mn doses are expected between March and June.

With direct deals with manufacturers, South Africa seems behind in the game. It expects 1.5mn doses of the AstraZeneca (AZ) vaccine via a deal with the Serum Institute of India (due to arrive in late January and in February). The AZ vaccine was the first to receive regulatory approval today, but the current volumes will only be enough to vaccinate about 50% of South Africa’s medical workers. A 9mn-dose deal with Johnson & Johnson is also being mooted. Yet for now it appears that South Africa has failed to leverage its participation in both the AZ and Johnson & Johnson vaccine trials to secure firm supply deals.

The most charitable interpretation of the vaccine delays is that the Ramaphosa administration may have prioritized multilateral engagement over bilateral deals, including in the case of AVATT, which Ramaphosa personally chaired and which has secured about 270mn vaccine orders for AU members.

A second reason may be that officials had hoped that global pressure would push down prices, at a time when South Africa faces record fiscal constraints. Mboweni and the Treasury have come under strong criticism for being slow to provide vaccine funding, even when an estimated ZAR 10bn-20bn cost might prove the most effective expenditure in preventing further Covid-19 waves and associated economic disruption. Worse, the government is now coming under scrutiny for potentially overpaying, at a reported USD 5.25 per AZ dose, well above the USD 2-4 price tag reportedly being paid by the US, EU and African Union (AU). Criticism may only intensify if vaccines are used as a justification for tax hikes in the February budget or any cuts in Covid-19 social grants.

A final reason why South Africa looks relatively badly positioned in the global vaccine race may be that, unlike some Latin American countries, the government has not yet actively courted vaccine deals with China or Russia as alternative suppliers. Unless further vaccine procurement, distribution processes and timetables are announced quickly, South Africa could end up in a ‘worst of all worlds’ vaccine scenario.

Another challenge is that, if the government is serious about its vaccination target, this would mean inoculating 100% of the adult population (39.2mn). This will be an uphill challenge in the face of vaccine skepticism.

While the NEC did recommend a confidence campaign, the government has signaled that vaccination will not be compulsory. Yet highlighting vaccine skepticism, a recent Ipsos/WEF poll found that only 51% of respondents favored vaccination. The most extensive poll to date conducted by the University of Johannesburg and the Human Sciences Research Council (HSRC) suggests that about two-thirds of South Africans “would definitely” or “would probably” get vaccinated (52% and 14%, respectively), though this still tracks somewhat below global polling averages. 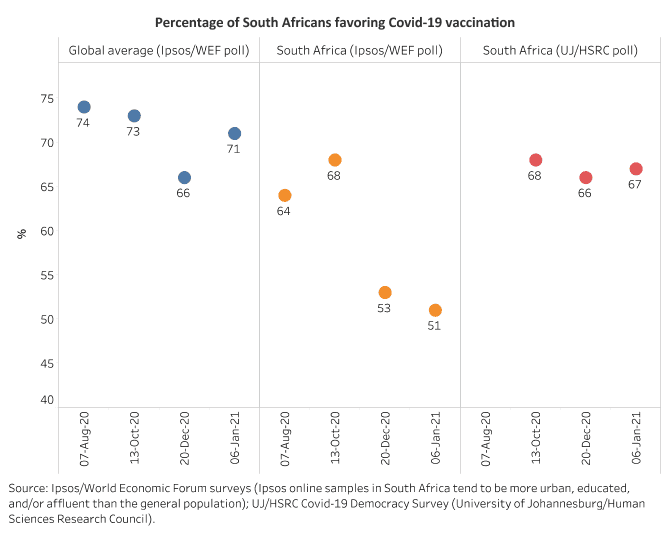 With at least one third skeptical, vaccine doubts articulated by key leaders, including Chief Justice Mogoeng Mogoeng and some ANC NEC members, hardly help. A range of outlandish conspiracy theories are doing the rounds on social media, ranging from allegations that Bill Gates-financed vaccines are intended to kill Africans or that they could be used to secretly sterilize men, to claims that vaccines can modify DNA, or simply suspicions that shots distributed in developing countries will be vastly inferior to those provided in Western countries.

However, the most important determinant of vaccine attitudes is overall trust in the government. The UJ/HSRC poll showed that vaccine acceptance was significantly higher among supporters of the ANC (78%), while acceptance was lower among supporters of opposition parties (Democratic Alliance – 65%, and the Economic Freedom Fighters – 62%). Vaccine acceptance was only 48% among those respondents who do not intend to vote at all. Overall, only 45% of those rating the government’s pandemic response as poor were in favor of vaccination.

The government’s handling of the pandemic and the vaccination drive will have important implications for the municipal elections, which are due to be held between 3 August and 3 November. Vaccine delays, associated tax increases or cuts to Covid-19 social benefits would hardly be vote winners amid South Africa’s deep economic crisis. Particularly in Gauteng, where the ANC is dangerously close to dropping below the 50% vote mark in key cities, pandemic and job losses may disillusion voters. The only reason why the ANC may be less than alarmed is that opposition parties like the DA and EFF face their own internal struggles and are unlikely to repeat their unprecedented electoral gains of 2016. The only clear winner of the 2021 polls might thus be voter apathy.

( 5 mins) Freshly inaugurated President Hakainde Hichilema is riding a wave of goodwill. Yet the reform process ahead will undoubtedly be politically painful and administratively challenging; it will be measured by the next budget, IMF talks and

( 4 mins) Opposition leader Hakainde Hichilema has won the 12 August presidential election by a landslide, trouncing incumbent President Edgar Lungu by close to 1mn votes. Despite three days of tensions and suggestions that Lungu’s side might

( 4 mins) Following a brief interlude in late June, the Tigray conflict has escalated and broadened, spilling across domestic borders and sucking in combatants from other Ethiopian regions. This intensifies the risk of worst-case scenarios – a

( 3 mins) General elections will take place on Thursday, 12 August. The recent deployment of the military highlights the risk of electoral violence around the high-stakes polls. As explained previously, the presidential election should be opposition leader