NIGERIA: What next for #endSARS?

Following four days of violent civil unrest on the streets of Lagos and elsewhere across southern Nigeria last week, the organizers of the original #endSARS protests have called upon their supporters to continue their protests online and are unlikely to return to the streets any time soon. As this will hamper their ability to keep up the pressure on the government, it remains to be seen to what extent the latter will follow through with promised security sector reforms. Nevertheless, the protests may have provided the baptism by fire for a hitherto largely apolitical generation of young Nigerians. However, Nigeria’s party-political structure remains a formidable obstacle for this potentially powerful electoral cohort to enact meaningful change by the time of the 2023 general elections.

The escalation of protests last week, which degenerated into large-scale mob violence across Lagos and elsewhere, has put a lid on the peaceful protest movement that had emerged in early October. As discussed earlier, this escalation may have at least partly been provoked by the government as reports of paid street gangs disrupting peaceful demonstrations abound on social media. However, given Nigeria’s socio-economic backdrop of mass unemployment, double-digit inflation and widespread poverty, the risk of ill-intentioned groups exploiting the protests for short-term material gain had always been present. As the #endSARS movement is largely driven by middle-class Nigerians who have nothing to gain from a descent into anarchy, appeals to move the protests online and obey the laws should not come as a surprise. In fact, the grim macroeconomic picture suggests the risk of peaceful protests again being hijacked by opportunistic elements will remain high.

While the retreat online will certainly reduce the #endSARS protesters’ ability to put pressure on the government, they nevertheless signaled that they would watch closely whether the authorities follow through with promised reforms. Particular emphasis will likely be placed on the commissions of inquiry set up in various states to investigate and prosecute cases of security forces’ brutality. However, if past precedent is anything to go by, resolution through these mechanisms should not be expected. For instance, the Kaduna State commission of inquiry which officially investigated the notorious December 2015 Zaria massacre concluded in July 2016 that 348 civilians had been killed by the army within a matter of hours. Yet despite an official recommendation to prosecute the culprits, this has never been acted upon.

Meanwhile, the protests may have politicized an entire generation of young Nigerians. Voter apathy has been a long-running trend, and voting by young voters and the southern parts of the country has traditionally been even below the meager national averages displayed in the chart below. While expectations are building that an emboldened youth may come out en masse to vote the ruling All Progressives Congress (APC) out of power in 2023, the question is whether there will be a viable alternative by then. The APC is, in many ways, a copycat version of the People’s Democratic Party (PDP), which ruled the country from 1999 to 2015. While there is no shortage of fringe parties (a total of 73 competed in the 2019 election), only the APC and the PDP can count on nationwide organizational structures, which are extremely time-consuming and costly to build. As a result, in 2019 only 10 of 360 seats in the House of Representatives were won by representatives of third parties. Furthermore, the only third-party candidate securing a seat in the senate dumped his Young Progressive Party (YPP) merely a month after the vote to join the ranks of the APC, pointing to the overwhelming patronage potential of the established parties. 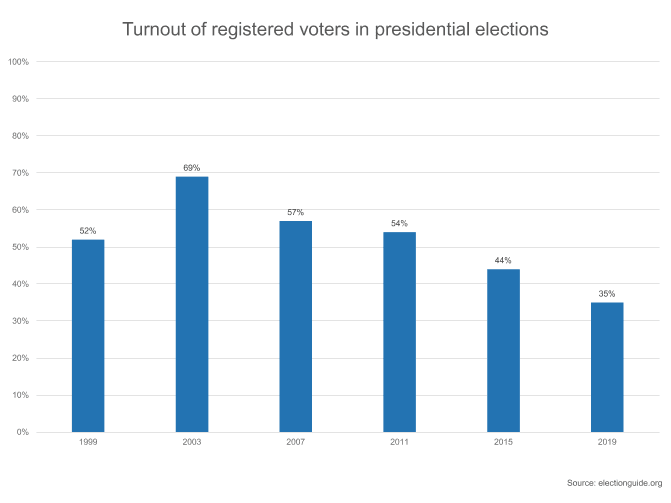