After several days of protests demanding the disbandment of a notorious police unit, the Federal Special Anti-Robbery Squad (F-SARS), Nigeria’s chief of police announced the unit’s immediate dissolution 11 October. Nevertheless, demonstrators vowed to continue their protests unless and until the announcement was backed up by an executive order signed by President Muhammadu Buhari. Amid a context of ever-more precarious socioeconomic conditions, the protests are the strongest display of political street activism in about a decade. However, while there is a certain potential for this issue-specific protest to transform into a more general anti-government movement, it would be a first for a Nigerian protest movement to transcend deep-seated ethnic and religious cleavages.

On 3 October, a video allegedly showing an F-SARS officer killing a man went viral on social media, encouraging numerous users to share their own stories, including graphic footage of abuse allegedly suffered by members of the police unit under the hashtag #endSARS. In fact, F-SARS is one of the most notorious police units, and calls for its disbandment and comprehensive police reform have been voiced repeatedly in recent years. As of 8 October, the hashtag had transformed into quickly growing protests across several urban agglomerations, most notably in and around Lagos – where protesters blocked parts of the artery Lekki Expressway – but also extending to the capital Abuja and other cities.

In response, Inspector-General of Police Mohammed Adamu announced the immediate dissolution of the unit on 11 October. However, protesters vowed to push on unless and until the announcement was followed by an executive order, also demanding that F-SARS members should be investigated for their alleged crimes. On 12 October, the government published a recorded statement by Buhari, who had so far remained silent, condemning police violence and promising more comprehensive reforms, though stopping short of signing an executive order.

The protest movement, driven by the country’s youth and seemingly (still) lacking a broader organizational structure outside social media, is the largest manifestation of political protest since 2012. Back then, a general strike forced then-president Goodluck Jonathan to withdraw his plans to abolish a fuel subsidy. Today’s protests take place against a grim economic background featuring record-high unemployment and persistently high inflation (see the ‘misery index’ chart below), while the economy is forecast to shrink by 3% this year over the Covid-19 pandemic.

The government’s surprisingly swift reaction suggests it is well aware of the movement’s potential to grow into something bigger. However, successive Nigerian governments have proven very adept in coopting organized labor and civil society organizations and playing off protest movements over ethnic and religious divides. Against this background, and similar to the mentioned 2012 protests, it would be premature to suggest the #endSARS protests would be the beginning of a Nigerian Arab spring-style movement. 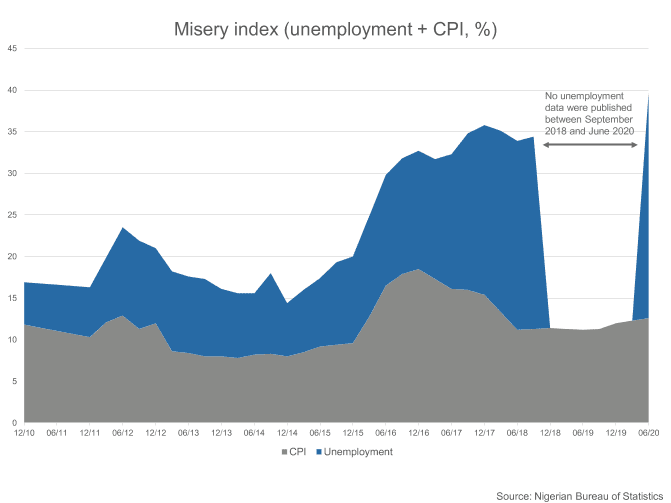 NIGERIA: More of the same from the central bank