MACRO: How politics and institutions continue to shape responses to Covid-19

As the graph below shows, countries with the highest Covid-19 death rates tend to be where citizens are the least satisfied with their government’s handling of the pandemic. The low popularity of certain governments might undermine citizens’ trust in the authorities’ actions to contain the virus, potentially limiting the effectiveness of new crisis-fighting measures. This is particularly true at this stage of the pandemic, when lockdowns tend to be more localized and require coordination across different levels of the administration (local, regional, national), and when restrictive measures are constantly updated. Compliance with new restrictions might be patchier in places where citizens disagree with their government’s overall strategy. 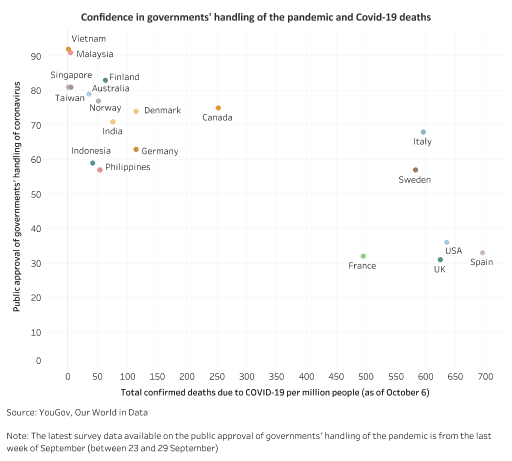 However, in other countries with a comparatively high death Covid-19 rate, such as Italy and Sweden, governments’ strategies have relatively high support. This suggests that other factors beyond health outcomes shape citizens’ views on their government’s handling of the pandemic. Similarly, the population of certain countries that have faced difficulties reducing daily cases and struggled with welfare payment schemes, such as the Philippines and Indonesia, still see their leaders with majority public approval.

Another political factor to watch are the increasing levels of polarization in some countries, which might complicate their governments’ responses to the virus. In the UK and Spain, for instance, around half of the respondents to a recent opinion poll said that their country was now more divided. In contrast, in Denmark, Australia, Canada, and South Korea, most people believe that national unity has increased after the coronavirus outbreak. As the graph below shows, citizens tend to perceive higher social divisions in countries where people are more critical of their government’s handling of the pandemic. 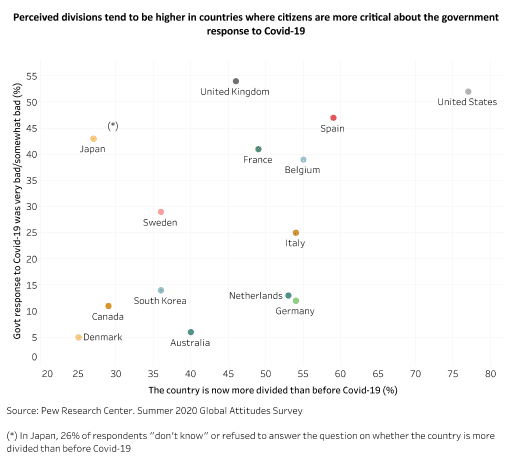 The implications of a potential acceleration of polarization due to the pandemic are threefold. First, it can lead to a delay in the implementation of new measures. Second, in highly polarized contexts, citizens tend to see public health measures through a political lens. In the US, for instance, Democrats are more likely to say that masks should always be worn than Republicans; in Spain’s Madrid region, the center-right regional government has opposed Covid-19-related restrictions imposed by the left-wing central government, labeling them as “politically-motivated.” Third, polarization can increase once it becomes clear that governments that responded promptly to the pandemic lack viable exit strategies. This is particularly the case in Latin America. In Argentina, Colombia, and Peru, local populations initially rallied around early-stage lockdowns, only for support for these policies to fade away amid repeated lockdown extensions, which have caused significant economic disruption.

The weight of institutions

In addition to politics, the response to Covid-19 will continue to be shaped by institutional factors, such as certain bureaucracies’ inability to develop effective track-and-trace systems. For instance, several Spanish regions facing a resurgence of cases had less contact tracers than the recommended ratio. In Mexico and Argentina, one of every two tests performed comes back positive, which shows that testing capacity is extremely limited. This, in turn, has forced these governments to implement more stringent measures to contain the spread of the virus, as can be seen in the Philippines and Indonesia. In contrast, countries such as Germany and South Korea, where track-and-trace systems have been more effective, have so far avoided the introduction of encompassing lockdowns. In Singapore, long-entrenched institutional credibility allowed the government to recover from an early misstep in handling migrant workers that allowed local transmissions to emerge.

Second, civil servants’ lack of autonomy from political control can also lead to mangled responses to the virus. Elected politicians have usually been more inclined to lift lockdown restrictions earlier than civil servants. In countries where high-ranked civil servants have a large degree of independence from politicians, these have acted as a counterweight by speaking out against certain decisions. But in others, this has led to tensions and eventually the departure of technocrats. For instance, in Brazil, two health ministers resigned after disagreements with Brazil’s President Jair Bolsonaro.

In the short to medium term, governments’ responses to Covid-19 will be constrained by these factors. Going forward, if restrictive measures are necessary for a prolonged period, the debate on whether to extend economic support measures – such as furlough schemes, support packages for business, and basic income grants – will remain very much alive. This creates particular challenges in countries such as Argentina, where some 60% of the population is now estimated to be receiving some kind of state benefit or support. Against this backdrop, several governments might resort to extracting a higher amount of revenues from business via taxes in order to fill the widening fiscal gap.

Politically, one factor to watch in the long term is whether this crisis will lead to higher distrust in political institutions in some countries, particularly in those where levels of trust in institutions were already low before the pandemic. This is relevant because radical forms of politics tend to emerge precisely in contexts of high political discontent and economic upheaval. So far, however, the pandemic’s political effects have been very country-dependent – populist parties and/or leaders, for instance, have suffered in some countries (Germany) and remained strong in others (Mexico). Electoral processes in 2021 will offer firmer evidence of this effect, with Latin America offering up a series of presidential and/or legislative votes in Mexico, Argentina, Peru, and Ecuador.