South Africa’s Q2 GDP figures, released on 8 September, showed that the economy shrank by an annualized 51%, or 16.4% quarter on quarter, the worst quarterly contraction on record. The figures underscore the impact of one of the strictest pandemic shutdowns on an already feeble economy. Although much of the economy has been progressively allowed to reopen in Q3, fresh electricity shortages highlight just how poorly positioned South Africa is for a post-pandemic recovery. Moreover, international travel remains severely restricted, and a night-time curfew in place.

The dismal Q2 print will sharpen Finance Minister Tito Mboweni’s excruciating fiscal conundrums ahead of October’s medium-term budget. In the June emergency budget, the government had already forecast that tax revenue will fall short of February’s annual budget targets by ZAR 304bn (USD 18bn), sharpening Mboweni’s increasingly intractable debt problems. The dismal figures will redouble pressure on President Cyril Ramaphosa’s administration to announce yet another economic recovery plan. But expectations will be very low given the administration’s abundance of plans and its poor track record on the implementation front. It is, therefore, still unclear whether the government will seize on the depth of the economic crisis to finally pursue long-overdue reforms.

Meanwhile, Nigeria’s economy contracted by 6.1% in the second quarter, equally representing the sharpest quarterly decline on an annualized basis on record. Amid the oil price crash and a general slowdown of non-oil economic activity due to lockdown measures, foreign exchange rationing by the Central Bank of Nigeria (CBN) continues to hamper the importation of raw materials. Remarks by President Muhammadu Buhari on 10 September, echoing a similar statement from August 2019, suggest the CBN will double down on this strategy in the future. At the same time, insecurity weighs on agricultural production areas across the north.

Nevertheless, the severity of the crisis and pressure from international donors appear to have triggered certain pro-market macroeconomic reforms that had hitherto been unthinkable under Buhari’s statist leadership. Most notably, on 9 September, the Petroleum Products Pricing Regulatory Agency (PPPRA) announced that it would abandon any remaining pricing guidance on fuel products, while a costly fuel subsidy had already been scrapped in April. Similarly, a 50% electricity price hike supposed to result in ‘cost-reflective’ tariffs, postponed since 2016, was eventually implemented on 1 September.

The fate of other key economies in the region will be on display shortly. Q2 GDP data for Ghana is due on 18 September, while Kenya’s second-quarter print is to be published on 30 September. As countries that were faring better ahead of the pandemic and that boast better policy frameworks overall, Ghana and Kenya could be better positioned for economic recovery than the region’s large laggards. As such, the diverging recovery trajectories of the region’s economies will become increasingly apparent.

Yet SSA countries have little money to pump into their hard-hit economies, and the growing debt burden facing many SSA sovereigns remains fundamentally unresolved. The G20’s Debt Service Suspension Initiative (DSSI), which expires at the end of the year, will almost certainly need to be extended, perhaps at the next G20 meeting of finance ministers and central bank governors, which is scheduled for 14 October. A broader solution for the deepening debt problem is nowhere in sight, and the issue of private sector participation in any debt rescheduling, refinancing, or relief has barely been discussed.

The World Health Organization (WHO) has voiced cautious optimism that overall new Covid-19 infections appear to be declining in the region, citing falling cases for the past seven weeks. According to the WHO’s 9 September Situation Update, new confirmed Covid-19 cases (34,564) and deaths (1,173) declined by 17% and 14%, respectively, between 2-8 September and with the prior reporting period (26 August-1 September). Nevertheless, the WHO cautions that declining figures may be “affected by many factors, including the current testing capacity and strategy, and delays in reporting.”
To a large extent, the encouraging trends also seem to be driven by pandemic trends in South Africa, the country with the single largest caseload, but also arguably the highest amount of testing. South Africa accounts for 59% of cumulative total cases and 65% of all deaths. The regional trend of new infections has thus improved as new cases in South Africa have declined drastically since the end of July. However, according to the WHO, a total of 26 countries have recently recorded a decline in new cases.

In the global context, the regional figures still look benign. As of 8 September, the WHO reported a cumulative total of 1,091,012 COVID-19 cases across the region. This represents only 4% of confirmed COVID-19 cases globally, and 2.6% of all deaths reported worldwide. Moreover, the case fatality ratio (CFR) reported in 45 countries is 2.1%, and the percentage of asymptomatic cases is estimated to be as high as 85%.

Yet the problem of underreporting and testing remains highly problematic. A mere ten countries account for 87% of all reported cases (South Africa, Ethiopia, Nigeria, Algeria, Ghana, Kenya, Cameroon, Cote d’Ivoire, Madagascar, and Senegal). Above all, this may be a reflection of limited testing and reporting elsewhere and suggests that the pandemic is playing out largely undetected in the majority of countries (for example, in Tanzania, which has effectively ignored the pandemic).

Nevertheless, the combination of seemingly low infection and fatality rates across the region may reinforce policymakers’ resolve to proceed with reopening their economies. As in some other regions, a return to stringent lockdowns seems unlikely. Policymakers will take their cue from evolving global thinking on the minimum responses required to contain or at least lessen the public health emergency, but also growing questions over the extent to which developed country solutions can be applied in a developing country context. Their appetite to reimpose lockdowns will be dimmed by the severe economic impact of lockdowns witnessed in Q2 and sharpening fiscal conundrums, particularly if worst-case public health scenarios do not materialize. 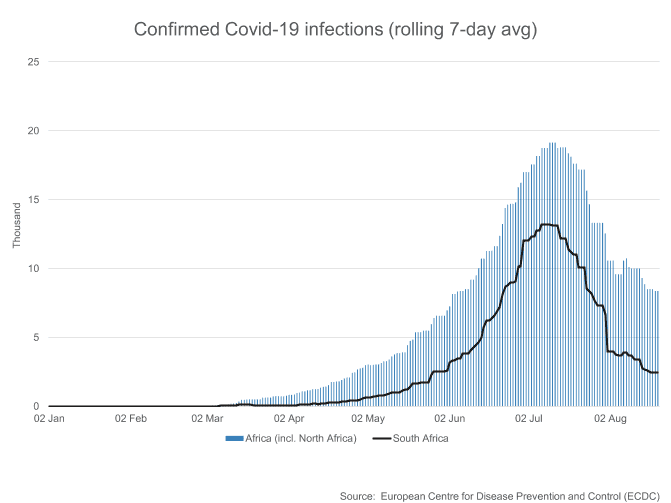 SOUTH AFRICA: Labor battles about to get serious