The race to succeed Shinzo Abe as leader of the Liberal Democratic Party (LDP) officially began on Tuesday, 8 September. The three expected candidates – Yoshihide Suga, Shigeru Ishiba, and Fumio Kishida – filed to run in the abbreviated campaign. With only six days until the 14 September vote, Suga has amassed a commanding lead that will make it virtually impossible for either of his challengers to win. 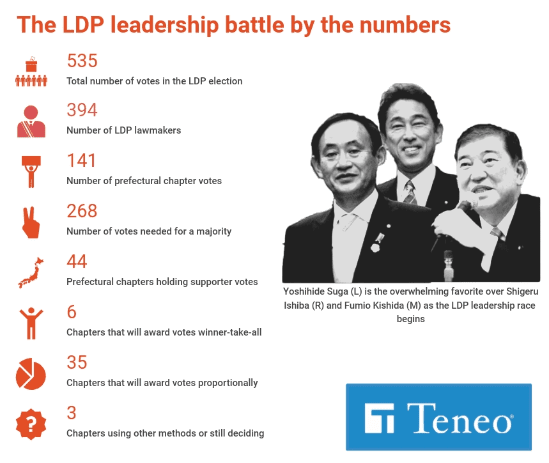 Not only does Suga have the support of five of the LDP’s seven major factions and many of the party’s independent lawmakers, he has also translated his support among lawmakers into a sizable advantage in opinion polls. Whereas earlier this year he polled in the low single digits when respondents were asked who should be the next prime minister, since entering the race as a heavy favorite, he has surged past Ishiba, who has long enjoyed a strong following among the LDP’s rank-and-file supporters and been a favorite among the electorate as a whole. Polls indicate that Suga is now the favorite among a sizable majority of LDP supporters, suggesting that he could also amass a large number of the 141 votes that will be cast by the LDP’s prefectural chapters. 44 of 47 chapters have decided that they will hold votes among their dues-paying members to decide which candidate to support, the bulk of which will use proportional representation to distribute their three votes. As a result, Ishiba and Kishida are competing to decide who will finish in a distant second place.

The surge in public support for Suga suggests he will likely enjoy strong approval ratings at the outset of his premiership. Accordingly, speculation has mounted that he could call a snap election soon after forming a government to dispel any doubts about his mandate to govern and position himself to govern over the longer term. A general election victory would increase the likelihood that the LDP will grant him a full three-year term when the remaining year in Abe’s term expires in September 2021. It is not guaranteed that Suga will call an election before the end of the year – the LDP’s coalition partner Komeito remains skeptical, Suga himself has stressed that he wants to prioritize fighting the Covid-19 pandemic, and the general public is not eager for an election – but if his political position remains strong, it may be difficult for him to resist the temptation to call a snap election.

Although Suga has faced more scrutiny of his background, his political beliefs, and his plans for governing since he emerged as the frontrunner to succeed Abe, he has nevertheless offered relatively few details about how he would govern beyond than presenting himself as the continuity candidate. He has, for example, voiced his support for Bank of Japan (BOJ) Governor Haruhiko Kuroda’s efforts to stimulate the economy and ruled out a consumption tax cut. Beyond the immediate challenges of the pandemic, Suga’s new proposals are largely in line with issues he has stressed earlier in his career: decentralization, regional revitalization, administrative reform, and the digitalization of government and society. He has also sought to reassure the public that although he lacks extensive formal experience in foreign affairs, as Abe’s chief cabinet secretary he was heavily engaged in foreign policy making and will be equal to the pressing issues in Japan’s relations with the US, China, South Korea, and other regional powers. Meanwhile, Suga, who does not belong to a faction, has stressed that despite emerging as the presumptive successor due to the timely support of the LDP’s leading factions – and LDP Secretary-General Toshihiro Nikai – he will not be beholden to faction bosses in personnel decisions or in policymaking.

Perhaps the most important takeaway from Suga’s campaign is that it is increasingly apparent that Suga does not see himself as running to be a caretaker for the remainder of Abe’s term. He is instead running to be Abe’s successor in full. While he will face a difficult agenda and a party full of potential rivals ready to pounce on his missteps, Suga will bring considerable assets to the premiership, including a background as a self-made politician who worked his way up from local politics; an emphasis on concrete results on pocketbook issues over abstract ideological goals (like Abe’s pursuit of constitutional revision); his experience as chief cabinet secretary, during which he mastered the bureaucracy and developed extensive ties throughout the ruling coalition; and the public’s preference for political stability. These factors could enable Suga to avoid a return to the short-lived governments that preceded Abe’s historically long tenure.