EUROPE: Coronavirus response in the hands of national governments

On the technical level, the European Commission is using existing instruments to ensure the exchange of information between governments and push for a coordinated approach. National governments, which remain ultimately responsible for health policy, have developed a similar range of responses so far. Far-right politicians’ attempts to exploit the issue to push for border closures (for instance, by Marine Le Pen in France and Matteo Salvini in Italy) have been unfruitful. Member states have adopted a cautious approach towards potential curbs, in line with the Commission’s preference for any restrictions to be implemented proportionally and in a coordinated manner.

75% of Europeans believe that the Schengen zone of passport-free travel is good for business in their country, and 68% see it as one of the EU’s main achievements. Together with the economic benefits, this might explain why member states have so far been reluctant to impose temporary border restrictions. In a polarized political landscape, however, such technocratic and economic approaches are continuously being challenged. Moreover, public opinion varies across countries. In Italy and France, for instance, people are less enthusiastic about Schengen than elsewhere. These disparities are signposts to watch as governments try to devise the next steps in fighting the virus. 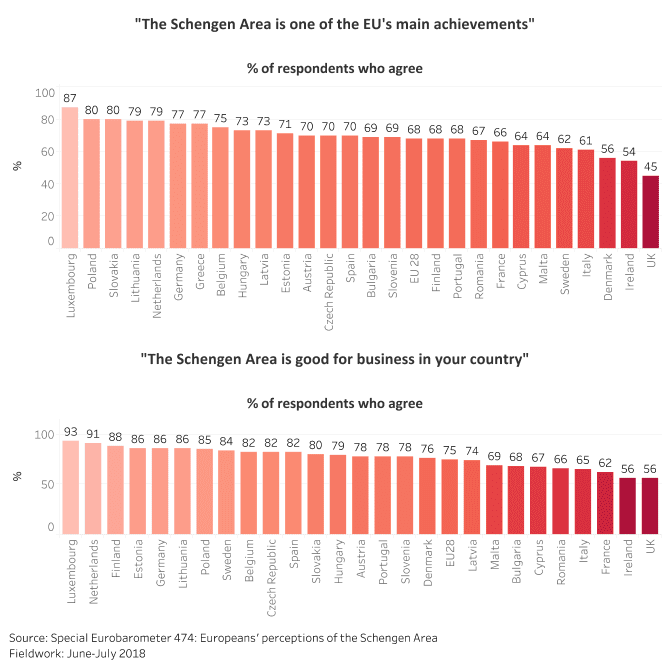 The experience of past cross-border emergencies suggests that domestic politics could perhaps incentivize leaders to change track if the outbreak were to intensify. The example of the 2015 migration crisis is a case in point. The Commission did not have the power to impose a common approach to the issue, while the domestic politicization of migration led several governments to reject a joint response. They opted for the unilateral imposition of border controls instead. The effects extended well beyond the peak crisis period, with countries continuing with random border checks.

International health authorities have warned that unilateral travel restrictions are ineffective in containing the spread of the virus. Still, the experience of the migration crisis suggests that curbs could become more likely if one member state goes ahead, thereby raising the pressure on other national governments in a chain reaction. Note that the introduction of border checks remains an exclusive prerogative of member states; the Commission can issue an opinion, but it cannot veto it.

Economically, temporary border controls introduced during the migration crisis had mild negative effects. Considering all border controls established since the summer of 2015, the overall goods and services trade of EU-28 countries declined, on average, by 1.3% compared to the status quo in 2011. If border controls were to be reinstated, they would likely further add to any negative economic consequences of the virus outbreak.

Regarding the expected economic effects, a concerted approach in the form of fiscal stimulus remains highly unlikely. Northern Eurozone members remain concerned about risk-sharing and have worked hard to ensure no common budgetary resources are devoted to stabilization purposes, much to the chagrin of southern members demanding risk-reduction. Countries with larger fiscal spaces also remain politically reluctant regarding domestic stimulus measures.

Instead, the Commission is likely to once again use the exceptional situation of the outbreak to provide countries with marginally greater fiscal space. In the meantime, the EU is reviewing its fiscal rules, following complaints from several member states about their utility and complexity. But even if a revision were to lead to more investment-friendly rules, these are unlikely to materialize quickly enough to help deliver a response to the economic consequences of the coronavirus outbreak.

( 3 mins) The preparatory talks of recent days have led to the launch of exploratory negotiations for a “traffic light” coalition of the Social Democrats (SPD) with the Greens and the center-right Liberals (FDP). These are still

( 3 mins) As expected, the Socialist Workers’ Party (PSOE) and far-left Unidas Podemos reached an agreement on the draft 2022 budget on 5 October, which the government is expected to approve and send to the Congress of

( 3 mins) The members of the center-right party The Republicans (LR) agreed on 25 September that their presidential candidate would be elected in an internal ballot on 4 December. While the decision could help the candidacy of

GERMANY: The fault lines to overcome for a traffic light coalition

( 3 mins) Following the 26 September Bundestag elections, a so-called traffic light coalition led by Olaf Scholz and his Social Democrats (SPD) is, for now, the most likely outcome. However, if talks between the Greens and the