Antitrust efforts are escalating in China. An Olaf Scholz chancellorship is becoming more and more likely in Germany. Argentina’s ruling party suffered a setback in a congressional primary vote. Meanwhile, the ruling party’s leadership contest will start in Japan this week, Russia’s main party will win a comfortable majority in the lower house elections, Brazil’s recent protests might have ramifications this week, and Guinea ‘s military junta will hold consultations with civil society groups. 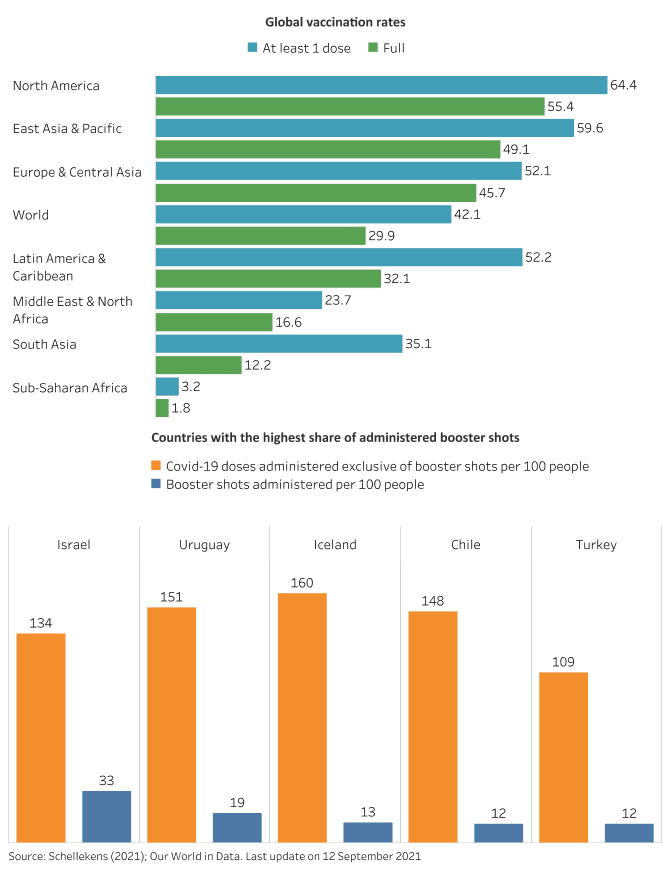 Lack of access to vaccine supplies continues to be a major barrier preventing poorer countries from vaccinating their citizens. The positive news is that several middle-income countries, such as Argentina, Brazil, Malaysia, or Turkey are managing to administer vaccine doses at a relatively rapid and stable place. This explains why the differences in vaccine coverage between middle-income regions (i.e., Latin America) and Europe and North America are smaller than four months ago. On the flipside of this, citizens in sub-Saharan Africa continue to have very limited access to vaccine supplies. Only 1.8% of citizens in this region are fully vaccinated, and this figure is even lower if South Africa – the region’s leader in vaccine coverage with 12% of the population fully vaccinated – is excluded. Furthermore, last week, COVAX, a global program to ensure access to vaccines across the world, announced that its 2021 forecast for available doses would be reduced by a quarter. The political conversation around booster shots and their potentially negative implications for the global distribution of Covid-19 vaccines will attract headlines in the coming weeks.

Regulators will break up Ant Group into distinct payment and lending companies that must operate through separate apps, with the lending company bringing in outside investors. Separately, the industry ministry will require Alibaba and Tencent to stop blocking each other’s website links from their respective platforms. Both moves are part of a broader anti-monopoly campaign focused on the technology sector.

With less than two weeks to go until the elections, an Olaf Scholz chancellorship is becoming more and more plausible. Yesterday’s TV debate of the three chancellor candidates was watched by more than 10mn people and produced few surprises. Scholz from the Social Democrats (SPD) won the debate in the eyes of 41% the viewers surveyed afterwards, followed by Christian alliance (CDU/CSU) candidate Armin Laschet at 27% and Greens’ contender Annalena Baerbock at 25%. In the short term, however, the biggest danger for Scholz remains that he fails to cobble together a viable coalition.

The obligatory party primaries held yesterday, 12 September, delivered a severe setback to the governing Front for All (FdT) coalition and President Alberto Fernandez. The FdT lost by nine points nationally to the opposition Together for Change (JxC). The FdT was outvoted in its electoral stronghold of Buenos Aires province and other bastions and key districts. If these results are replicated in the November mid-terms, the FdT would lose the majority it currently enjoys in the Senate, while its lower house bloc would be significantly reduced. In immediate terms, the key question is whether Vice- President Cristina Fernandez (CFK) will force a cabinet reshuffle or focus on maintaining an outward display of unity in the bruised governing coalition.

The ruling LDP’s leadership contest officially opens this week, ahead of the 29 September party vote that will determine the country’s next prime minister. Favorite Taro Kono has slightly softened his previous opposition to nuclear power, though green energy stocks still rose in anticipation. Fumio Kishida is also in contention, promising a kinder variant of Abenomics with a greater focus on addressing inequality, while long-shot hardliner Sanae Takaichi wants to double military spending.

Prime Minister Kyriakos Mitsotakis announced on 11 September a range of measures aimed at boosting the post-pandemic recovery, mitigating the impact of inflation on households and appealing to young voters. The total fiscal impact of the 24 measures laid out by the PM is estimated at EUR 3.4bn, with the bulk of that (EUR 2.35bn) coming next year. According to the government, the economy is set to rebound by 5.9% this year, higher than the 3.6% previously forecast.

The ruling United Russia (UR) party is set to achieve a convincing victory in the upcoming election to the State Duma – parliament’s lower house – on 17-19 September. The Kremlin’s objective is to retain a constitutional two-thirds majority, ensure the vote’s perceived legitimacy, and avoid large-scale post-election protests. Major changes in the cabinet or the government’s policy direction are unlikely after the vote. Policy continuity implies an increasingly precarious and unpredictable business environment for foreign investors.

The implications of last week’s protests in favor and against President Jair Bolsonaro will be discussed this week. Over the weekend, many demonstrators also showed their opposition towards former President Luiz Inacio Lula da Silva, who is currently at the top of the polls for the October 2022 presidential elections. In the Senate, the inquiry into the pandemic will resume with a focus on the attempted irregular purchases of the Covaxin vaccine. At the House, a new Electoral Code should be approved that brings together laws on electoral matters and reintroduces party coalitions in proportional voting, thus halting the process of reducing the number of parties in the political system (currently at 35). Lastly, the Supreme Court (STF) is likely to bring down presidential decrees that authorized the ownership, carriage and registration of weapons.

The military junta has announced to hold consultations this week with a range of societal groups ahead of the formation of a new government. The junta led by Colonel Mamady Doumbouya announced to meet with the heads of political parties, religious leaders, civil society groups, mining companies and employers’ organizations, banks, as well as organized labor representatives. Meanwhile, the Economic Community of West African States (ECOWAS) will continue to deliberate on its strategy vis-a-vis the putschists, after having suspended the country’s membership in the wake of the 5 September coup d’etat.