Peru’s new cabinet will face a vote of confidence from Congress. Zambia’s new president will be sworn in this week. Meanwhile, US Vice President Kamala Haris will visit Singapore and Vietnam. A cabinet reshuffle could be on the way in Greece, a draft annual budget law will be presented in Brazil, and Kenya’s Building Bridges Initiative has been declared unconstitutional. 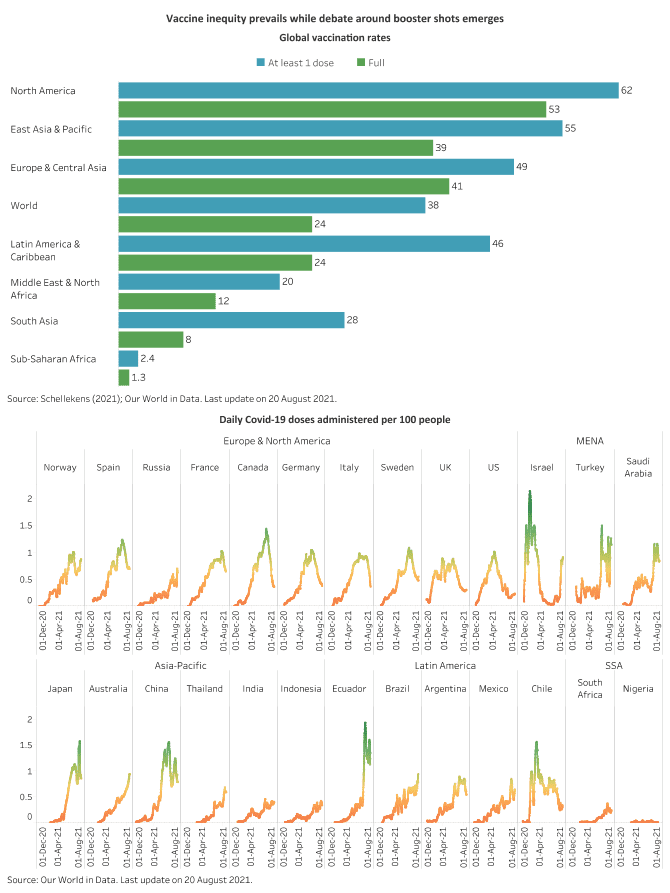 The expansion of the Covid-19 vaccine rollout continues to diverge substantially across nations. While in North America and Europe, most countries have already fully vaccinated more than half of their residents, most people living in the world’s poorest regions are still unvaccinated. Meanwhile, as observed in the second graph, the pace of the vaccine rollout is slowing down across most advanced economies, while it is gradually improving, even if slowly, in some middle-income countries, such as Brazil, Ecuador, Indonesia, and Thailand. Despite the important progress on the vaccine front, recent studies have indicated that the protection provided by some vaccines might be fading faster than expected. Against this backdrop, Israel and Chile have started to give third booster shots, while the US is expected to start doing so in mid-September, despite the World Health Organization’s strong opposition. If third boost doses become a reality in more countries, it could further deteriorate the outlook for vaccine supplies in poorer countries.

A congressional vote of confidence in President Pedro Castillo’s first cabinet is scheduled for 26 August. The cabinet must win a simple majority in Congress. The governing Peru Libre (PL) party and its main ally, Together for Peru (JPP), only have 42 out of 130 seats. If Congress votes against the cabinet, Castillo would have to reformulate his ministerial picks and resubmit them to Congress for another vote. Castillo’s pick for prime minister (PCM), Guido Bellido, remains the most controversial choice. The key question is whether Castillo decides to jettison Bellido before 26 August and whether that would irrevocably divide the PL. If Bellido stays, the question is whether fractured opposition parties decide to postpone such an early confrontation with the new president.

The new prime minister, Ismail Sabri Yaakop, said today that he would not appoint opposition members to the cabinet. There have been various lists of the new cabinet circulating in Malaysian social media, with some having opposition MPs as part of a unity government. But with Ismail still consolidating his position within his own coalition, no opposition members are likely to make it in.

US Vice President Kamala Haris arrived in Singapore on 22 August and will travel to Vietnam tomorrow. The trip follows the recent visit of Defense Secretary Lloyd Austin, and while the controversy over Afghanistan will frame some parts of her visit, the trip will still, overall, raise the US profile.

Prime Minister Kyriakos Mitsotakis could opt for a cabinet reshuffle as normal political activity slowly resumes. This would f ollow an unusually turbulent period for his New Democracy administration over the last few weeks. A reshuffle could be a way of dampening the impact of negative poll numbers and showing the public that the government is turning the page after a difficult summer.

On 23 August, Ukraine holds an inaugural Crimean Platform summit attended by representatives of more than 40 countries. It is a new diplomatic initiative of President Volodymyr Zelensky aimed at maintaining the issue high on the political agenda and push for Russian de-occupation of the peninsula. In response, Russia called the event an encroachment upon its territorial integrity and has sanctioned more than 70 Ukrainian officials, including its Foreign Affairs Minister Dmytro Kuleba.

A draft annual budget law must be presented by 31 August, but several significant items are still undefined. These include the total amount of a new cash transfer program (Aux ilio Brasil) and a constitutional amendment on federal judicial debts (precatorios) that could free up the necessary funds for the program – in addition to the overall budget itself. Furthermore, changes in income tax rules may be approved in the House after a failed attempt last week. Meanwhile, the institutional crisis across branches of government will continue as President Jair Bolsonaro vows to request the impeachment of a second Supreme Court judge this week.

On 20 August, the Court of Appeal upheld a high court ruling declaring aspects of the Building Bridges Initiative (BBI) unconstitutional. The ruling represents another blow for President Uhuru Kenyatta’s and opposition leader Raila Odinga’s plans to pass constitutional changes via a popular referendum. Running short of time ahead of the 2022 elections, Kenyatta’s focus may now shift to stymying Deputy President William Ruto’s presidential aspirations by other means.