China’s securities regulator has called for better communication with its US counterpart. Peru’s newly appointed Finance Minister might help calm markets. Meanwhile, India’s central bank is expected to leave key rates unchanged, Bulgaria’s parliament will vote on the new prime minister, Brazil’s branches of government return to work this week, and South Africa’s government has announced a relief package for businesses and individuals after a wave of unrest. 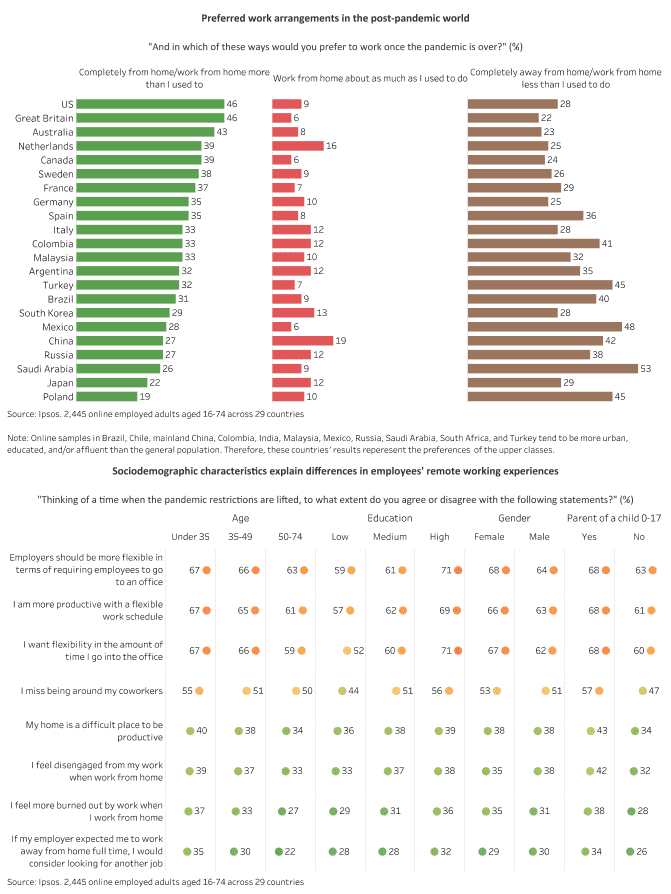 As the number of vaccinated people increases, particularly across advanced economies, the debate around return-to-work policies and working arrangements is also heating up. While in advanced economies between 35% and 50% of the workforce prefer working from home, the number is lower but still significant in developing economies. At the same time, many employees would still prefer working away from home once the pandemic is over. This is the case for around a quarter of the workforce in advanced economies and about half of the workforce in developing economies. At the same time, employees’ remote working experiences and preferences are also shaped by their sociodemographic characteristics and individual circumstances. For instance, younger workers and those with the highest levels of education are more likely than others to believe that employers should be more flexible in terms of requiring employees to return to the office. However, despite their demands for flexibility, young workers also feel more burned out than others when they work from home and consider their home a difficult place to be productive. In the next decade, the needs of workforces will become more and more diverse in terms of social realities and personal circumstances.

China’s securities regulator said on 1 August that the agency had taken note of rules issued by the Securities and Exchange Commission (SEC) on 30 July. The US rules added new disclosure requirements for Chinese companies traded on US exchanges. The Chinese regulator’s statement called for improving communication between the agencies, a possible overture to bilateral negotiations.

The belated appointment of Pedro Francke as Finance Minister over the weekend could help calm markets early this week. Francke had initially balked at serving in a cabinet led by Guido Bellido, who is President Pedro Castillo’s pick for prime minister (PCM). Bellido is a leftist radical with extreme views. Whether Bellido’s appointment is a strategy designed to provoke Congress into withholding its endorsement could become clearer in the coming days. If Congress refuses to grant its endorsement for the president’s cabinet picks twice, the president is able to dissolve Congress. The fact that a congressional dissolution is on the cards and that numbers for a possible impeachment are already being tallied less than a week since Castillo was inaugurated speaks to the degree of political uncertainty.

The Reserve Bank of India, the country’s central bank, will announce its third monetary policy review on 6 August. This will take place amid a continuing spike in retail inflation that has breached the 6% upper tolerance level for the past two consecutive months. However, the expectation is that the central bank will leave interest rates unchanged and treat current inflation as transitory.

Opposition legislators will attempt this week to escalate their challenge to Prime Minister Muhyiddin Yassin’s control, after the PM suspended the lone parliamentary sitting on Monday. The ruling council of the United Malays National Organization (UMNO), which holds the swing vote in parliament, will hold an emergency meeting on 3 August. This vote could add further pressure if the party reiterates its demand that the PM resign. Last week, the monarchy rebuked Yassin for his government’s failure to consult with the king on the repeal of emergency ordinances.

Parliament will vote on the government of Prime Minister-designate Plamen Nikolov – nominated by the largest parliamentary group There is Such People (ITN) – by 6 August. The outcome of the vote remains uncertain while negotiations among the parliamentary parties continue. Even if approved, the Nikolov’s government would likely be unstable and lack the support in parliament to advance ambitious reforms. If Nikolov fails to win parliament’s backing, a smaller parliamentary group – most likely the Bulgarian Socialist Party or Democratic Bulgaria – would get the final chance of forming the government.

On 3 August, Italy will enter the so-called “white semester.” These are the six months which precede the elections of a new president of the republic and in which parliament cannot be dissolved. With the risk of snap elections off the table, the political backdrop is likely to become noisier, especially as local elections in the fall will add to the tensions.

All three branches of government resume their work this week after a 15-day recess. At the house, a constitutional amendment to reintroduce paper ballots (strongly supported by President Jair Bolsonaro), a new report for an income tax reform, and a new bill for the privatization of the post office are on the agenda and could be voted. At the Senate, the inquiry into the pandemic will resume testimonies by witnesses and investigated persons in the context of irregular vaccine purchases. In the Judiciary, Supreme Court justices are expected to react to last week’s commentsby the president against the existing electronic voting system.

Finance Minister Tito Mboweni on 28 July announced ZAR 39bn (USD 2.6bn) worth of fiscal relief for the poorest, while promising support for businesses hit hard by the pandemic and the recent unrest. The recent unrest has moved the needle on the long-running debate around a basic income grant (BIG). The presidency is already modeling financing options for a potential ZAR 500 (USD 34) monthly grant, which would cost an estimated ZAR 57bn (USD 3.9bn) a year. President Cyril Ramaphosa has recognized that reconfiguring cabinet was an “ongoing consideration” amid mounting criticism against the cabinet’s response to the unrest, especially on the security front.