US and Chinese officials held high-level face-to-face talks. South Africa’s president is under pressure to tackle social unrest. Pedro Castillo will be sworn in as Peru’s new president. Meanwhile, the US s ecretary of state will meet India’s prime minister, US and Russian officials will hold nuclear arms control talks, Brazil’s president will appoint a new chief of staff, and the conflict in Ethiopia ‘s Tigray region is entering a new phase. 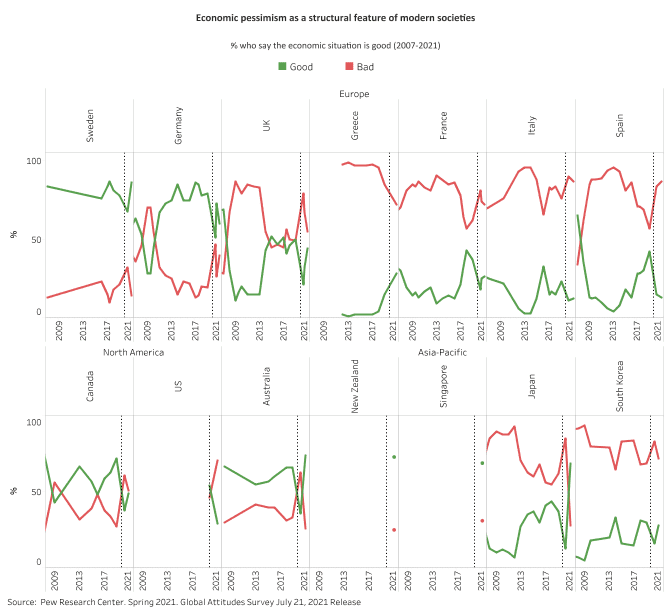 The level of uncertainty around the economic recovery appears to have increased in advanced economies due to rising Covid-19 infections, supply chain disruptions and labor shortages. Business optimism has decreased against this background in countries such as the UK, the US, Germany, and Australia. At a societal level, however, pessimism about the economy has been a defining feature of advanced economies for at least more than a decade. This is particularly the case in southern European economies such as France, Italy, and Spain. In Spain and Italy, people are today as negative about the state of the economy as they were in the aftermath of the Great Recession in 2010. The pandemic has significantly deteriorated how people feel about the economy despite the unprecedented levels of fiscal support by national governments. Therefore, even if in most countries citizens are today more positive about the economy than last year, economic pessimism could remain a structural feature of many advanced economies.

US Deputy Secretary of State Wendy Sherman held talks with Chinese Foreign Minister Wang Yi in the northern port city of Tianjin on 26 July. Ahead of the trip, US officials framed the meeting as a continuation of the March meeting in Anchorage, and neither side is likely to offer substantive concessions, but the visit may serve to avoid a further deterioration in the relationship.

The ruling ANC is holding a special extended National Working Committee meeting on 26 July. President Cyril Ramaphosa’s administration is under massive pressure to tackle the fallout from the recent #FreeZuma unrest, which the president has described as an orchestrated “insurrection.” Pressure to clean up the party and to reshuffle cabinet has redoubled. With economic damage estimated around ZAR 50bn (USD 3.4bn), the South African Reserve Bank has maintained its 2021 GDP growth forecast at 4.2%, rather than making an expected upward revision. The fiscal consequences are also emerging, with Ramaphosa announcing social and business relief on 25 July.

Pedro Castillo will be sworn in as president on 28 July following a protracted period of uncertainty in the wake of the June run-off, which Castillo won by the narrowest of margins. The unanswered questions and doubts surrounding Castillo’s political convictions, experience, independence from a powerful political mentor, and relations with his party are notable. How Castillo intends to navigate Congress, where his Peru Libre (PL) party, together with its Together for Peru (JPP) ally, total only 42 out of 130 seats, will be an immediate challenge. Opposition parties in Congress should deliver an early signal of their intentions today, 26 July, as the congressional leadership group is elected.

US Secretary of State Antony Blinken will visit India on 27-28 July. He will meet Prime Minister Narendra Modi and External Affairs Minister S Jaishankar. The Covid-19 pandemic, vaccine production, India’s relations with China, and the emerging tensions in Afghanistan in the wake of the departure of US troops will be among the subjects for discussion. Jaishankar and Blinken have already met three times last year. After US Defense Secretary Lloyd Austin’s visit earlier this year, this will be the second high-profile visit to India of a member of the Biden administration.

Parliament today reconvened for a five-day sitting for the first time since January. The first day featured Prime Minister Muhyiddin Yassin giving a briefing on his government’s national recovery program, but he left instead of engaging in debate or follow-up questions. In the next few days, the opposition is likely to push for debates on the government’s handling of the pandemic. The government also stated that the state of emergency which ends on 1 August will not be extended, allowing parliament to resume regular sessions by September.

The US and Russia will discuss arms control and risk reduction measures in a Strategic Stability Dialogue on 28 July in Geneva. The high-level meeting – which is a follow-up to the bilateral summit held in mid-June – is not expected to result in any major agreements but rather to lay groundwork for future cooperation in this area. Both countries are also holding regular talks on cybersecurity, although the prospects for any tangible results is this area appear low.

President Jair Bolsonaro will confirm on 26 July the appointment of Ciro Nogueira – the president of the Progressives Party (PP) – as chief of staff of the Presidency. He is a prominent leader of the pro-government “Big Center”, a group of pragmatic, non-ideological parties. This is the first time since democratization that a president appoints a top congressional leader for such a strategic post within the presidency as opposed to a close aide from his circle of trust. Congress is in recess from 18 to 31 July. It is expected that the president will only sanction the budget law (LDO) after recess. He has committed to vetoing a tripling of the electoral fund for the October 2022 elections, but negotiations are on cut only one third of the proposed amount.

The Tigray conflict is entering a fresh phase. Hopes of a ceasefire are unravelling as Tigrayan forces have pushed into the eastern Afar region. This is sucking in forces from four Ethiopian regions (with Amhara regional authorities calling on “all young people” to join the “anti-TPLF war”) and has triggered threats of a fresh military campaign from the federal government. The risk of further international sanctions is escalating as the two sides trade blame for blocking humanitarian aid needed to alleviate worsening famine conditions. Externally, Egypt is pushing for international action against Ethiopia’s second filling of the Grand Ethiopian Renaissance Dam.

President Alassane Ouattara is scheduled to meet Laurent Gbagbo on 27 July. Following Gbagbo’s return to Cote d’Ivoire on 17 June, the official meeting would be the first personal encounter since the 2010 presidential election. As Gbagbo’s activities since his return signalled an antagonistic stance vis-a-vis Ouattara, attention will be focused on any official statements emanating from the meeting that may herald a rapprochement between the two long-time adversaries.

( 5 mins) Press play to listen Peru’s new cabinet will face a vote of confidence from Congress. Zambia’s new president will be sworn in this week. Meanwhile, US Vice President Kamala Haris will visit Singapore and Vietnam.