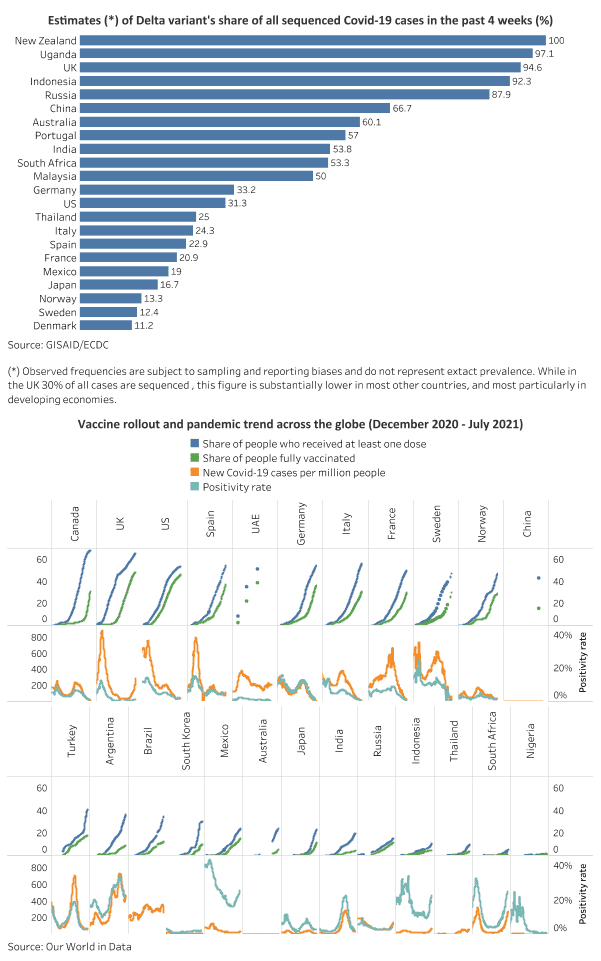 A new wave of the Covid-19 pandemic is under way. The spread of the Delta variant is behind the surge of cases in countries such as the UK, Indonesia, Russia, and many sub-Saharan African countries. In countries where the vaccine rollout has been slower, governments have recently tightened lockdown measures to get the pandemic under control. This is the case in South Africa, Indonesia, Russia, and Thailand, to name a few. These are countries where vaccinations are not advancing fast enough, and where Covid-19 related hospital admissions and deaths are likely to continue increasing in the coming weeks. The pandemic outlook is less negative across most developed economies with a high vaccine uptake. So far, the sustained increase in Covid-19 cases in the UK has translated into a moderate rise in hospital admissions while deaths have remained relatively stable. A similar trend is observed in developed countries with rising cases, such as Portugal. However, there questions remain around whether – and for how long – Covid-19 safeguards will need to remain in place.

Prime Minister Abiy Ahmed is under pressure on all fronts. On 28 June, he declared an immediate unilateral ceasefire in Tigray for “humanitarian” reasons but only after federal forces suffered heavy defeats at the hands of Tigrayan fighters. For its part, Tigray’s rebel leadership has set out tough preconditions for a ceasefire. Diplomats are also concerned about a federal blockade on Tigray, which would aggravate a developing famine and increase the risk of Western sanctions against Ethiopia. Outside its borders, Abiy faces a fresh showdown with Egypt and Sudan over its second filling of the Grand Ethiopian Renaissance Dam (GERD).

Prime Minister Narendra Modi will reshuffle the federal council of ministers later this week, possibly Thursday, 8 July. Portfolios of those ministers holding more than one ministry will likely be re-allocated. The reshuffle will also see more representation from states heading for assembly elections in the next few months, including Uttar Pradesh and Uttarakhand.

The center-right Citizens for European Development of Bulgaria (GERB) and political newcomers There Are Such People (ITN) party will vie for victory in the snap parliamentary elections scheduled for 11 July. The vote will likely result in another fragmented parliament, which – combined with long-standing political rivalries – will once again make it difficult to form a majority government. Nonetheless, ITN has the largest number of potential coalition partners and, therefore, the best chances of leading the next cabinet. In case none of the parties is able to form a majority government, another technocratic cabinet would become likely.

The constituent assembly will continue to work out various practical arrangements this week after it was officially inaugurated on 4 July. Issues to iron out include the exact competencies of the newly elected assembly president, the Mapuche indigenous academic Elisa Loncon, and her deputy Jaime Bassa, as well as the creation of thematic committees and how to go about holding sessions outside the capital Santiago. To judge from yesterday’s chaotic first session, finalizing practical arrangements risks becoming a time-consuming distraction; the assembly has up to 12 months to write the constitution. The assembly opening was marred by protests and clashes with police which briefly saw proceedings paused, while yesterday’s session was suspended amid technical problems.

The ANC National Executive Committee (NEC) met on 5 July, with ex-president Jacob Zuma topping the agenda. Zuma has lodged a last-minute appeal against a 15-month prison sentence from the Constitutional Court for failing to appear before the Zondo commission on state capture. Zuma’s application for a stay of execution of his arrest order will be heard on 6 July, while the Constitutional Court will hear a recission application on 12 July. The case will test the rule of law. Politically, it requires delicate handling given the noise and threats generated by a small but hard core of Zuma supporters.