China’s Sinopharm has been approved by the WHO for emergency use. Chile will face several elections this week, including a constituent assembly election. Italy’s government will approve a new stimulus package Meanwhile, China’s Sichuan Airlines will restart operations to India, there is still a majority in favor of independence from the UK in the new Scottish parliament, Brazil’s senate investigation into the government’s handling of the pandemic continues, and Kenya’ssenate will vote on an important bill this week. 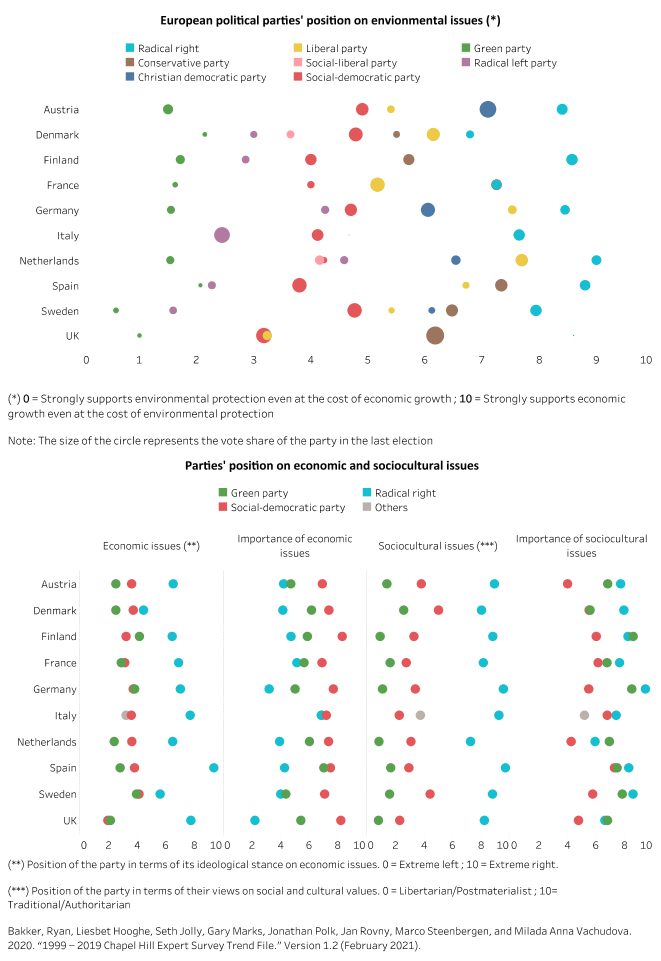 Green parties have benefited in recent years from the increasing importance of environmental-related issues in the public debate, together with the rise of sociocultural issues. As their electoral appeal is growing in some countries, they have also broadened, and sometimes moderated, their policy agenda. These trends are observed in the two graphs above. The Greens are usually the most ambitious on the environmental front, but social-democratic, radical left, and socio-liberal parties tend to be – more modestly – supportive of these policies as well. Even liberal and conservative governments in France, the UK and the Netherlands have recently ramped up their efforts to combat climate change. In fact, plans to combat climate change are increasingly framed as job creation schemes, which can be politically attractive across the political spectrum. It is not surprising that radical right populist parties are the most skeptical towards environmental and climate policies. Politically, these policies are tied together with other sociocultural issues that have gained importance in recent decades across advanced economies, such as immigration, gender equality and cultural diversity. While green parties tend to represent the most progressive force on these issues, radical right parties position themselves on the opposite side of the spectrum.

The World Health Organization approved China’s Sinopharm vaccine for emergency use on 7 May. Thisenables the vaccine to be included in the Covax initiative, while marking the first time that the WHO has granted emergency approval to a Chinese-made vaccine for any infectious disease. The WHO will consider Sinovac’s vaccine this week.

Mayoral, municipal council, gubernatorial, and constituent assembly elections that were postponed from April because of the pandemic take place on 15-16 May. There is no precedent for the constitutional vote beyond the October 2020 referendum, which produced a landslide in favor of a new constitution. These are also Chile’s first gubernatorial elections. The key question is whether the government’s recent difficulties and President Sebastian Pinera’s dire approval ratings help the Left and Center-Left reach a two-thirds majority in the constituent assembly that champions radical change and/or populism. The results will also have a bearing on the presidential race to succeed Pinera.

This week, the government is expected to approve a new stimulus package worth around EUR 40bn. Just like in previous similar packages, the money will be sprayed across multiple initiatives and beneficiaries to meet the requests put forward by the political parties backing Prime Minister Mario Draghi’s government. The government is also working on a new decree to reduce red tape – past similar efforts have usually failed to make any meaningful difference.

China’s state-run Sichuan Airlines, which had suspended its cargo operations to India following the second wave of Covid-19, will restart services on 9 May after a 15-day break. India sources around 70% of its requirements of drug intermediates, key starting materials and active pharmaceutical ingredients (API) from China. The suspension of cargo operations had caused a massive glitch in India’s pharma production, negatively affecting the manufacturing of Covid vaccines.

The Scottish Nationalists (SNP) did not win an absolute majority in the regional elections, but together with the Greens, there is still a pro-independence majority in the new Scottish parliament. While this outcome makes a quick move towards a second referendum unlikely, the issue will keep simmering for the foreseeable future, as the UK government has every incentive to delay the conversation for as long as possible. Meanwhile, the opposition Labour party is in disarray after another round of losses in its former heartlands in the Midlands. While Labour leader Sir Keir Starmer is under pressure, the government’s strong vaccination record is likely to have further boosted the Tories.

The Senate inquiry into the mishandling of the pandemic that started on 4 May will continue this week. Two former health minister and the current one have already been heard. The first and second ministers were highly critical of the president’s denialism of the pandemic and his narrative against social isolation or mask-wearing. Meanwhile, the current health minister, Marcelo Queiroga, refused to criticize the president and assigned any blame on the unpreparedness of the national health system. The inquiry, which has so far been fairly harmful to the president and his government, should reach a high point when the longest serving and most conformist health minister under Bolsonaro, Army General Eduardo Pazzuelo, testifies on 19 May.

The Senate is due to vote on the Building Bridges Initiative (BBI) bill this week. The National Assembly overwhelmingly voted in favor of the bill last week, with 224 MPs backing the bill, 63 objecting and two abstaining in the third reading. This represents a win for President Uhuru Kenyatta and opposition leader Raila Odinga and a resounding loss for Deputy President William Ruto, whose fate within Kenyatta’s Jubilee alliance and his presidential hopes may now be called into question. Once the bill passes the Senate, a high court case will determine whether and when the electoral board can conduct a planned referendum.

The ANC National Executive Committee (NEC) met over the weekend. The meeting was closely watched as it is the first since ANC Secretary-General Ace Magashule was suspended for refusing to step aside over corruption charges. Reflective of continued infighting, Magashule, who represents the ANC’s ‘Radical Economic Transformation’ faction, is trying to appeal the sentence and claims he remains in office in the interim. While infighting is harming Ramaphosa’s administration ahead of October’s municipal elections, an eventual expulsion would be an upside for the president’s government and for his chances of securing a second term as ANC president at the 2022 elective conference.

( 8 mins) Voters in Japan will go to the polls. Turkey is heading for a major confrontation with its allies. A Senate report requests the indictment of Brazil’s president. The UK chancellor will present his autumn budget.