EU: The state of the debate on further stimulus

The recent approval of a USD 1.9tn coronavirus relief package by the US has led to inevitable comparisons regarding the size and speed of Europe’s fiscal efforts. French President Emmanuel Macron recently stated that Washington had been more innovative and ambitious, and that the EU should revisit its crisis response strategy. On the other hand, Eurogroup President Paschal Donohoe has repeatedly warned against such comparisons given the presence of automatic stabilizers in Europe, while these are largely absent in the US. This split is reflected in public opinion, with Europeans’ views split on whether the recovery fund will be effective enough to support the economy. 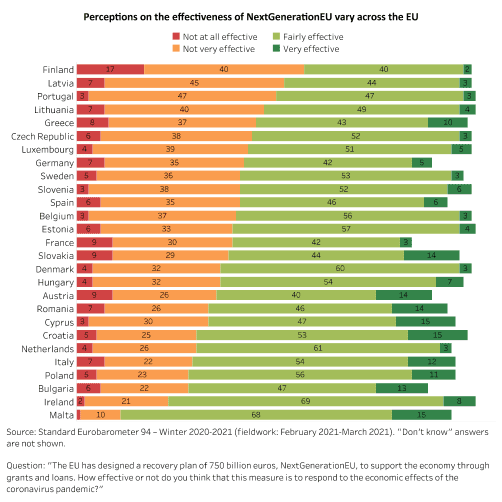 Slow pace is no surprise

A revamp of the existing EU fiscal strategy to boost the post-pandemic recovery looks unrealistic at this point, especially since the money from the EUR 750bn recovery fund agreed last year has not even started to flow to member states. The European Commission is still waiting for the ratification of the Own Resources Decision to be completed across all member states. So far, 17 out of 27 member states have ratified the legislation, which is essential for the Commission to tap financial markets by June and distribute the funds across EU governments. The recent decision by Germany’s constitutional judges to allow ratification has lifted a major obstacle to the process – even if the court still needs to deliver a final ruling. Finland also seems poised to confirm its support this week, despite domestic political turmoil.

A concurrent pending issue is the submission and evaluation of the national recovery and resilience plans to Brussels by 30 April, which some countries are expected to miss. Diverging structural capacities and national politics limit individual countries’ adherence to green and digital investment targets. Current debates around the Hungarian and Romanian plans are just the latest examples of this. The Commission still needs to assess the documents sent by national governments – which include reform commitments to be implemented in exchange for the funds – within two months of their reception. The Council (where member states meet) will then approve the plans, after which the Commission will make available 13% of the total agreed amount to member states as pre-financing. The lengthy formal approval dynamics are a reminder of the strongly procedural nature of EU politics. Despite the complaints by some EU countries, it is unlikely that the process will be sped up. The money remains likely to start flowing in the autumn.

Looking ahead – absent virus mutations forcing renewed shutdowns – frugal states are unlikely to see an immediate need for additional spending. As economies gradually begin to reopen, catch-up economic activity will likely make it difficult to argue politically for additional public spending. If anything, the implications for the political debate around monetary policy should be watched as a signpost. Frugal states might also want to wait and see how concerns around efficiency and absorption capacity play out in major recipient countries. Negative news – from misallocations to political instability – have the potential to create backlashes in the domestic debate in northern countries.

In the meantime, Germany’s infamous “debt brake” is on hold for another year, until the end of 2022. This should provide room for deviations from fiscal targets also in the EU (see below). But it will also allow defenders of the rule – within Germany and in Brussels – to point to their flexibility in times of crisis when arguing for a return to sound fiscal policies thereafter. Chancellor Angela Merkel’s Christian alliance (CDU/CSU) is already making this point in the run-up to the September elections, requesting to reinstate the debt brake by 2023. The Greens are officially calling for reforming the tool to allow for greater green investments. But their manifesto’s general lack of specificity and high constitutional hurdles raise the suspicion that such demands will ultimately be sacrificed on the altar of the Greens’ true desire: a coalition with the fiscally conservative CDU/CSU. This is largely what has happened in several regional states in which both parties govern together.

Since a revision of existing EU-wide support mechanisms seems off the table, the key issue to watch is the policy debate around fiscal rules. The Commission has signaled that it wants the “escape clause” of the Stability and Growth Pact (SGP) to remain active until the end of 2022, after which the EU’s fiscal framework would be reactivated. However, member states are debating a reform of the existing rules, and several governments remain adamant about making sure that strict deficit targets will not be forced upon them.

In any case, the discussion is unlikely to heat up before the first half of next year, when France wants to use its presidency of the Council of the EU to push for a more flexible framework. Paris’ recent exhortations to match the US’ fiscal ambition should be interpreted more as a way of advancing its agenda on revising the EU’s fiscal framework fundamentally rather than as a genuine attempt to expand the bloc’s capabilities for post-pandemic recovery in the short term.