A summit of top US and Chinese diplomats produced modest progress. In Turkey, a cabinet reshuffle is expected. EUleaders will meet for a digital European Council. Another general election is taking place in Israel. Meanwhile, the pace of vaccinations is accelerating in China, Slovakia’s government crisis continues, Argentina’s finance minister will meet the IMF leadership, and in Tanzania, a new president has been sworn in. 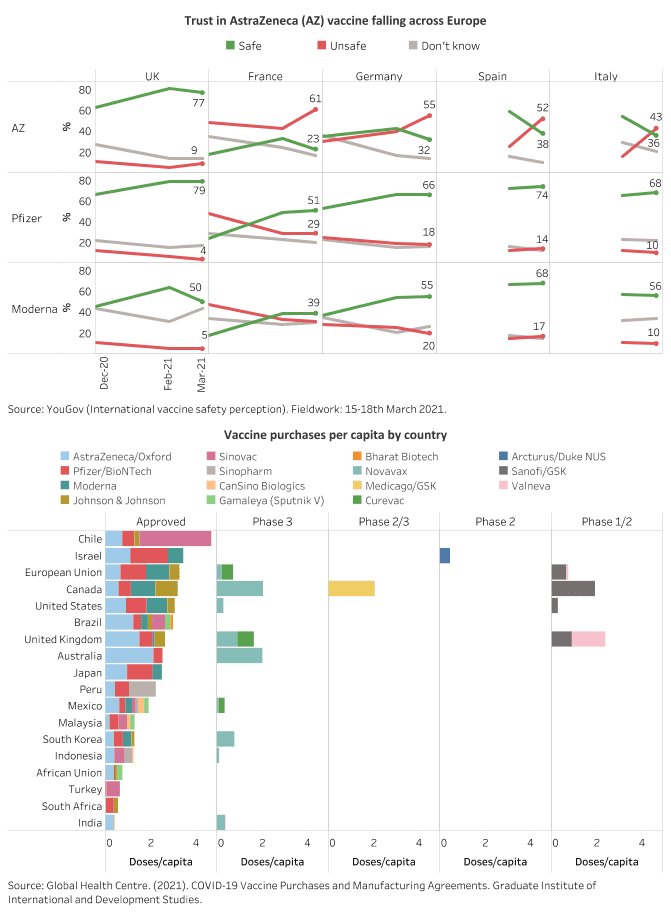 Trust in the Oxford/AstraZeneca (AZ) coronavirus vaccine is decreasing across European countries after several governments suspended its use due to safety concerns. In France, Germany, Spain, and Italy between 40% and 60% of the population consider this vaccine unsafe, while in the UK – where its administration was never suspended – most people (77%) believe it is safe. Spillover effects on confidence in other vaccines have not been observed so far. This week many European governments – apart from the Nordics – will start administering this vaccine, which according to a recent study prevents severe disease and hospitalization. However, governments will have a difficult time regaining trust in this vaccine, which could end up delaying the EU’s target of vaccinating 70% of adults by the summer. Outside Europe, many countries (including many low-income countries in sub-Saharan Africa) are highly reliant on the Oxford/AZ vaccine.

After a rancorous start in which both sides made forceful statements that appeared largely directed at domestic audiences, closed-door talks in Alaska between top US and Chinese diplomats appeared to produce some modest progress. The two sides agreed to set up a working group on climate change and to discuss restoring access for each other’s journalists and consular officials, according to an official Chinese readout, following last year’s journalist expulsions and consulate closures during the Trump administration.

A cabinet reshuffle is expected to be announced this week as the ruling Justice and Development Party (AKP) holds its seventh congress on 24 March. At the same time, the composition of the AKP’s executive bodies is also expected to change. This follows the replacement of the head of Turkey’s Central Bank (TCMB) Naci Agbal with Sahap Kavcioglu by President Tayyip Erdogan over the weekend.

Member state leaders will convene digitally for a European Council meeting on 25-26 March. Amid the bloc’s ongoing vaccination mess, a central question will be whether Commission plans for export restrictions will be backed by leaders – a thinly veiled threat to the UK. Several member states are still skeptical, but even they insist on UK talks with the EU to ensure reciprocity along the in fact integrated production and supply chain in Europe.

On 23 March, voters will go to the polls for yet another general election. The outcome in terms of government formation will crucially depend on which small parties make it over the electoral threshold for inclusion in parliament, and how large the “wasted vote” will be. Israeli politics continue to revolve around Prime Minister Benjamin Netanyahu, whose center-right politics have move rightward with popular sentiment. But whatever coalition emerges is likely to be fragile and short-lived.

After a slow start, the pace of vaccinations is accelerating, with 10mn jabs administered in the week through 20 March, raising the total number to 75mn, or 5.3% of the population. Health authorities also said they are considering differentiated policies for visa issuance and flights based on vaccination progress in different countries, including a possible vaccine passport scheme.

The United Nations Human Rights Commission (UNHRC) will debate this week a resolution to condemn Sri Lanka’s human right violations. If the UN vote is carried, Sri Lanka could face a political but possibly even an economic squeeze from western countries, including the US, France and Canada. These countries’ governments are being lobbied strongly by the minority Tamil diaspora. The resolution accuses the government and some individuals of genocide, war crimes and crimes against humanity. Due to geopolitical reasons, including the growing role of China in Sri Lanka, India’s vote on this resolution is still unclear.

Prime Minister Narendra Modi will travel to Bangladesh capital Dhaka on 26 March for his first visit abroad since the outbreak of the Covid-19 pandemic. The occasion is the golden jubilee of Bangladesh’s independence as a nation and the birth anniversary of the founder of the nation, Sheikh Mujibur Rahman. The visit is also meant to showcase vaccine diplomacy: India has pumped 2mn vaccines into Bangladesh as against promises made by China. The competition between the two countries in infrastructure creation will be emphasized.

The crisis within a four-party coalition government led by Prime Minister Igor Matovic (Ordinary People and Independent Personalities, OLaNO) is set to continue for a fourth consecutive week. A junior coalition member the Freedom and Solidary (SaS) party threatens to leave the coalition unless the prime minister steps down by Wednesday, 24 March. While Matovic has agreed to leave the post under certain conditions, the terms are unacceptable to SaS. The situation is volatile, but the most likely outcome remains a significantly reshuffled cabinet led by the ruling OLaNO.

Finance Minister Martin Guzman is in Washington DC where he is expected to hold a meeting with the International Monetary Fund (IMF)’s Kristalina Georgieva. Expectations for any significant progress or breakthrough in ongoing talks over the repayment of USD 44bn owed to the Fund are low. Guzman was in New York last week, though his meetings failed to elicit much enthusiasm from private investors given the lack of any medium-term economic plan and recent criticism of the IMF by President Alberto Fernandez; the group of Argentina Exchange Bondholders put out a terse statement questioning the value of Guzman’s trip.

Congress will start to focus on economic emergency measures such as the reduction of workdays and salaries and the refinancing of debts. This follows the issuing by the government of a new executive order with new rules for the disbursement of a new emergency assistance to 45.6mn people (22.6mn less than in 2020) at one third of last year’s value on average. Discussions will take place in the midst of a significant deterioration in relations between President Jair Bolsonaro and congressional leaders over his rejection of a prominent pro-science cardiologist favored by House Speaker Arthur Lira as new health minister and his filing at the Supreme Court (STF) of a case against governors who instituted curfews to control infections.

The electoral commission is expected to release results of the 21 March presidential election this week.President Denis Sassou Nguesso, who has ruled Cameroon since 1979 (with a short break from 1992-1997), has most likely secured an absolute majority in the first round, clearing the way for another five-year term. Main opposition candidate Guy-Brice Parfait Kolelas, who officially scored 15% in the 2016 election (against Nguesso’s 60%), had been flown to France to treat a COVID-19 infection and died on election day.

On 19 March, Samia Suluhu Hassan was sworn in as president. The erstwhile vice-president was unexpectedly catapulted to the country’s highest office after John Magufuli passed away following weeks of uncertainty. The transition to Suluhu follows the constitutional order, which entitles her to serve out the remainder of Magufuli’s five-year term. However, the question is how much power Tanzania’s first female and Zanzibari president will wield within the Chama Cha Mapinduzi (CCM) ruling party, where Magufuli’s hardline populists will compete with centrist factions. Crucial personnel signals will be the appointments of the next vice-president and prime minister; a key policy signal will be whether the government amends Magufuli’s denialist pandemic policies.