The political effects of the coup in Myanmar will be damaging. The Commission’s chaotic attempt to weaponize the Northern Ireland protocol has badly undermined the EU’s political credibility. A Chinese cell phone manufacturer filed a complaint in a US federal court. In Italy, a way out of the government crisis is unlikely this week. Ecuador holds a first-round presidential vote on 7 February alongside legislative election. Meanwhile, the military coup in Myanmar will undo years of political and economic progress, Russian opposition activist Alexey Navalny faces several legal accusations, Brazil will choose new congressional leaders, and sovereign debt will attract attention in sub-Saharan Africa. 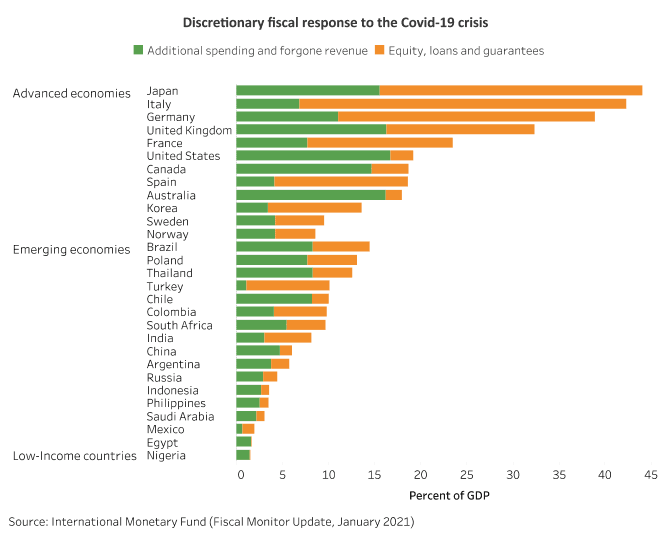 In response to the Covid-19 crisis, many countries across the globe have adopted fiscal stimulus packages. There are, however, important differences across countries. The scale of the packages is substantially higher in advanced economies, where borrowing costs are lower. Among advanced economies, the form of such support also depends on pre-crisis fiscal conditions. While highly indebted economies such as Spain and Italy have relied more on liquidity support (i.e., loans and guarantees), countries such as the UK, the US, Canada, and Australia have put forward more ambitious spending packages. Meanwhile, emerging economies – even those deeply affected by the Covid-19 crisis, such as Mexico – have been more constrained in their response due to limits on fiscal space and access to low-cost borrowing. In turn, the pandemic has pushed millions of people into poverty in low and middle-income countries. Against this background, debt restructuring initiatives should be watched closely, especially given the difficult access to Covid 19 vaccines in many developing countries.

The political effects of the 1 February coup will be damaging; the leap of faith that investors and countries gave the generals more than a decade ago has been undone. The military may avoid interfering with economic policies and investments to temper the negative effects of the takeover, but it will need to establish its credibility as an economic manager still.

The European Commission will try to recover from its chaotic response to the ongoing vaccine shortages. After a difficult week, the low point was reached on Friday night when the bloc’s executive briefly suggested it would trigger a special clause in the Brexit agreement. This would have reenacted border controls on the island of Ireland, to prevent vaccine exports to the UK. The mere hint at weaponizing the Northern Ireland protocol in such a way has badly undermined the EU’s political credibility and could set a dangerous precedent for other parties going forward. The episode highlights the amount of pressure under which Brussels finds itself due to the vaccine fiasco. But it also raises more fundamental questions regarding self-descriptions as “geopolitical” Commission.

Chinese cell phone manufacturer Xiaomi filed a complaint in a US federal court challenging the US Department of Defense’s designation of Xiaomi as a “Communist Chinese military company.” If successful, the lawsuit could pave the way for other Chinese companies on the list to challenge their inclusion on the blacklist, which bars US investors from owning the companies’ publicly traded securities under a White House executive order issued in November.

Roberto Fico, the speaker of the Chamber of Deputies who has been tasked with finding a way out of the government crisis, must report back to President Sergio Mattarella by 2 February. In the most likely scenario, a path to a solution will only develop after a worsening of the crisis, while noise about snap polls could intensify. A way out is unlikely to emerge until the end of next week.

The first round of the presidential election takes place on 7 February alongside legislative elections. If no candidate wins 50% plus one vote or more than 40% with a ten-point margin over their nearest rival – as appears likely – a run-off vote will take place on 11 April. The latest Cedatos poll puts the center-right candidate Guillermo Lasso slightly ahead on 26.2% against the leftist Andres Arauz, who is on 24%, with the undecided vote as high as 31.2%. Polling is now prohibited, making it difficult to assess the impact of allegations published in a Colombian news magazine over the weekend that Arauz received campaign funding from Colombia’s National Liberation Army (ELN) guerrilla group.

The Suga administration is expected to announce on 2 February that it will extend the state of emergency currently in effect in 11 prefectures and set to expire on 7 February for another month. The declaration will likely be lifted for Tochigi prefecture and could also be lifted in Gifu, Aichi, and Fukuoka prefectures. However, it is certain to remain in effect in the seven prefectures of the Tokyo and Osaka metropolitan areas that were subject to the initial declaration. Despite signs of falling case numbers in these prefectures, authorities remain concerned about the capacity of the medical system. Polls suggest that the public is broadly behind the extension of the state of emergency.

Congress is close to approving a tax reform bill that reduces the corporate income tax from 30% to 25% (and to 20% for small enterprises). It also streamlines the system for tax incentives. However, the agency that runs the country’s export zones is apprehensive that the changes in the incentive system could reduce perceptions of regulatory stability.

Political tensions will remain high as on 2 February the Simonovsky court in Moscow will decide whether to replace opposition activist Alexey Navalny’s suspended sentence with a real jail term. On 5 February, the magistrates’ court in Moscow will consider another case against Navalny, where he is accused of defaming a WWII veteran. On 4 February, the EU’s High Representative Josep Borrell is scheduled to arrive in Moscow for talks with his Russian counterpart Sergey Lavrov on a wide range of topics ahead of the European Council’s strategic discussion on EU-Russia relations scheduled for late March.

The elections of House Speaker and Senate Chairman will take place on 1 February. In the Senate, the pro-government candidate, Rodrigo Pacheco from the Democrats (DEM), is expected to win. In the House, however, the result is still unpredictable. The pro-government candidate Arthur Lira from the Progressives (PP) appears to be ahead, but betrayals are expected – since the vote is secret – and may favor the independent Baleia Rossi from the centrist MDB. The week should also see much discussion on Covid-19 vaccines and possible announcements on new shipments. So far, Brazil has only 12.5mn doses available and can only start local production in a few weeks if the active pharmaceutical ingredient arrives from China, as currently planned, by 8 February.

Sovereign debt will generate headlines this week. Chad and subsequently Ethiopia have signaled their intention to seek debt restructuring under the G20’s ‘Common Framework for Debt Treatments beyond the Debt Service Suspension Initiative (DSSI).’ The Framework has yet to be tried and tested, and the form that any debt treatments will take is still highly uncertain, beyond basic principles outlined by the G20 (including burden-sharing among all types of creditors).

Zambia has missed a second Eurobond coupon payment following its November default. According to the ministry of finance, the government did not make a USD 56.1mn payment on its 2027 Eurobond that fell due on 30 January. Zambia is scheduled to hold fresh talks with the IMF from 11 February until 3 March, but the likelihood of a program is modest ahead of make-or-break elections in August.