“2016 was a failure of the imagination, not a failure in data”

As we draw closer to November 3rd, the past week has seen some top outlets (NY Times/Fox News) released a series of polls suggesting the Trump campaign has fallen further behind in the key battleground states. With the current momentum in the polls we believe a Biden landslide (10% or more) victory is an increasing likely outcome.

To reflect the shifting election probabilities, most Wall Street economists have revised (up) their US economic projections – with expectations of an addition $1 trillion stimulus spending under a Democrat senate majority. Meanwhile, Facebook marked a first in removing a coronavirus related post by the President citing ‘a newly introduced policy that may take some time to enforce more broadly across its platforms’.

As the world of business and finance adjusts to the evolving election probabilities, we attempt to identify data blind spots which may lead to polling errors. In the aftermath of the 2016 US Presidential Election mishaps, a narrative emerged laying the ‘shock’ result largely attributable to a ‘hidden Trump vote’. Whilst this narrative is convenient, it is only partially accurate and fails to fails to capture the deeper rooted polling assumptions. Notably, a heavy reliance on National Vs State polls to make election forecasts – see the Electoral College. With the benefit of hindsight, the 2020 pollsters have almost entirely focused on a state-by-state approach to produce their final outcome predictions.
The table below shows aggregate polling data for states with a population of 5 million or more, as well as others with recent media coverage. 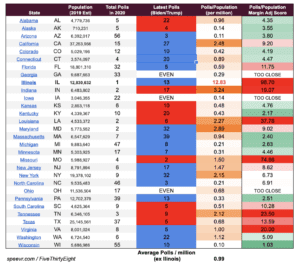 Using data provided by FiveThirtyEight, we tally up total number of polls conducted so far in 2020 across all pollsters with at least a ‘B’ grade according to Nate Silver. The column ‘Latest Polls (Biden/Trump)’ represents in blue or red the lead each candidate has in points (%) within each state according to the latest polls published. We normalise the state population according to the total number of polls conducted (year-to-date). i.e. the number of polls per million population .Thus, are able to deduce a very simple population adjusted statistical risk score which takes into consideration a candidates relative lead by state. The risk scores are calculated in the final column – ranging from Green (low) to Red (high) risk in polling uncertainty.
We conclude the following:
Brookings Institute
July 28, 2021

A structured learning approach to support scaling: Guidelines for how to do this in practice

The impact of COVID-19 on industries without smokestacks in Kenya: The case of horticulture, ICT, and tourism sectors

Industries without smokestacks in Africa: A Kenya case study

What constrained firm investments in digital technologies during the pandemic?