The mid-November deadline is approaching in EU-UK talks. In Ethiopia, the conflict with the Tigray region has escalated. Peru’s president will face an impeachment vote in Congress. Meanwhile, Australia’s trade minister has denied rumors about new trade restrictions from China, Hungary will impose new Covid-19-related restrictions, Brazil’s president has gotten involved in the country’s municipal elections, and South Africa’s president will give an update on the pandemic situation. 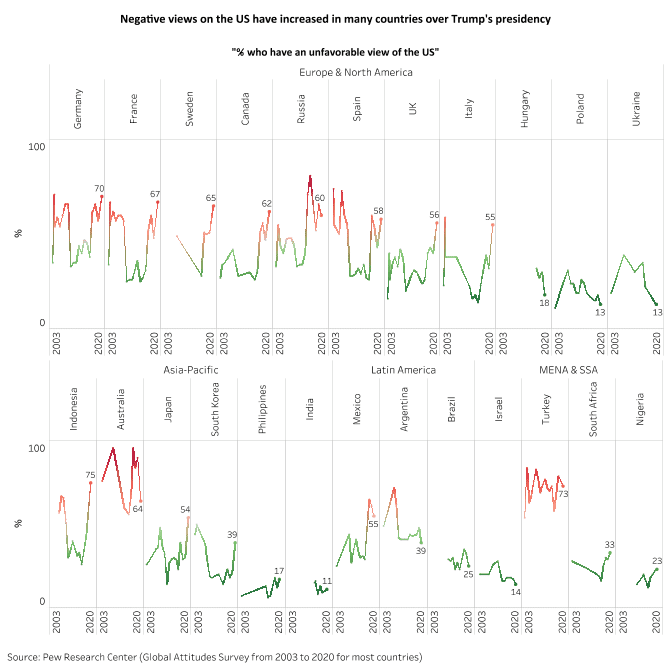 The election of Joe Biden as the next president of the US has worldwide implications – even if overall, his first-year priorities are expected to be heavily domestic. Broadly, Biden is expected to attempt to return to multilateralism, but may face challenges because questions have arisen in many countries reading their reliance on the US as a long-term partner. The graph above shows the deterioration of the US’ reputation over recent years, especially among allied democracies. On the other hand, Chinese leaders do not expect a Biden administration to pursue a full reset of bilateral relations following the recent, sharp deterioration, but they hope that the new administration can deliver more predictability, stability, and better communication, leading to fewer surprises.

As the mid-November deadline is nearing, the House of Lords will today scrap the most controversial clauses of the UK internal market bill. But as highlighted previously, the more important moment will arrive when the altered bill returns to the Commons later this month. At that point, the government will have to decide whether or not to insist on its original version of the text which had angered the EU. Independent of the next US administration’s opposition to any move that could undermine the Good Friday agreement, the UK government still faces the same trade-off: if it wants a deal with the EU, it will have to remove the bill’s most contentious parts – not because of the outcome of the US election, but because Brussels continues to insist on it.

The conflict between Addis Ababa and the Tigray region has escalated dramatically. In recent days, there have been reports of airstrikes, and clashes between federal troops and local fighters in eight locations across Tigray. A de-escalation seems unlikely for now, as Addis Ababa will likely want to gain a tactical advantage and establish facts on the ground quickly, though international pressure to stop the military offensive and commence political negotiations will mount over the coming days and weeks.

Congress will hold a vote on 9 November on whether to impeach President Martin Vizcarra. The impeachment bid centers on allegations that Vizcarra received kickbacks when he was regional governor of Moquegua, which the president strenuously denies. Impeachment requires a two-thirds majority, or 87 votes. The number of declared votes in favor of impeaching Vizcarra currently stands at under 50, though there is a large quantity of undecided or undeclared votes. Party divisions and some groups’ decision to allow a free vote make it difficult to determine with certainty which way the vote could go. However, the more likely scenario is that Vizcarra will survive today’s vote.

Australia’s trade minister said Chinese officials told him there is no coordinated effort to block Australian exports. This happened against the backdrop of numerous reports of informal bans on imports of various Australian products and several trade actions based ostensibly on quality issue or anti-dumping allegations. Meanwhile, China’s Foreign Ministry condemned Australia’s prosecution of a Melbourne man who belongs to several Chinese community associations. The case makes Australia’s first-ever use of a 2018 law against foreign political interference.

Results for the Bihar legislative elections will be declared on 10 November. Currently, Narendra Modi-led Bharatiya Janata Party (BJP) is a partner in the regional coalition government, headed by Nitish Kumar, the leader of the Janata Dal United (JDU). A defeat in Bihar would mean a setback for the BJP but it would also mean a complete decimation of the JDU. Chief minister Nitish Kumar has declared that this election would be his last one. Tejashwi Yadav, a young leader, is the JDU-BJP’s biggest challenger.

The government will significantly tighten Covid-19-related restrictions starting on 11 November. The new measures will include a 30-day curfew between 8pm and 5am, the mandatory closure of retail stores after 7pm as well as the complete closure of most cultural and entertainment facilities. New restrictions will be accompanied by economic support measures, including a waiver for payroll taxes as well as reimbursement of salaries in the affected sectors.

On 9 November, three center-right parties signed a coalition agreement to form the next government led by Ingrida Simonyte, an independent. As expected, its key priorities include a comprehensive education reform and the development of high valued-added sectors in the economy. The three parties – holding 74 out of 141 mandate in parliament – will now negotiate the composition of the cabinet, which is expected to be announced by the end of the week. Simonyte’s cabinet will likely be approved by parliament in the first half of December.

The presidency is expected to make a statement on Treasury and Finance Minister Berat Albayrak’s resignation today in the afternoon. Albayrak, the son-in-law of Turkish President Recep Tayyip Erdogan, unexpectedly stepped down on 8 November citing health reasons. Albayrak’s possible departure is unlikely to usher in an overhaul of Turkey’s economic policies.

Contrary to his original intention not to get involved in municipal elections, President Jair Bolsonaro has been supporting several mayoral candidates. He will intensify his efforts by doing daily live streams in this last week of campaigning before the 15 November elections. On top of his list is Celso Russomano from the Republicanos Party in Sao Paulo, who is trying to reach City Hall for the third time, and Marcelo Crivella from the same party in Rio de Janeiro, who is running for reelection. Bolsonaro said his renewed effort aims to stem what he perceives as a leftist revival in many countries of the region, including the United States. Candidates supported by the president are not doing especially well, which is consistent with new polls that reveal a fall in government approval in all of the corresponding cities. On the other hand, the government continues to favor creating a new “digital tax” on financial transactions as a means to pay for the extension of the payroll tax cut, which had been vetoed by the president but was overturned in Congress last week.

President Cyril Ramaphosa is expected to update the nation on the Covid-19 pandemic. The National Coronavirus Command Council (NCCC) and cabinet will meet this week to consider whether to extend the current state of disaster beyond 15 November. While the government is concerned about a fresh surge in infections, a return to a hard lockdown scenario seems unlikely given the extent of the economic and fiscal crisis. Third-quarter unemployment data due this week is expected to confirm the bleak economic outlook.