The G20 are due to decide on the future of the Debt Service Suspension Initiative (DSSI). Diplomatic efforts will continue to halt the dispute between Armenia and Azerbaijan. South Africa’s president will present an economic recovery plan. It will likely take until the end of the month for a UK-EU trade agreement to emerge. Turkey will send a research ship to disputed waters in the Eastern Mediterranean. Meanwhile, anti-government protests will continue in Thailand, Germany’s pandemic management might become more centrally coordinated, a referendum on a new constitution is looming in Chile, and Cote d’Ivoire is likely to go ahead with its general election later this month despite boycott threats from the opposition. 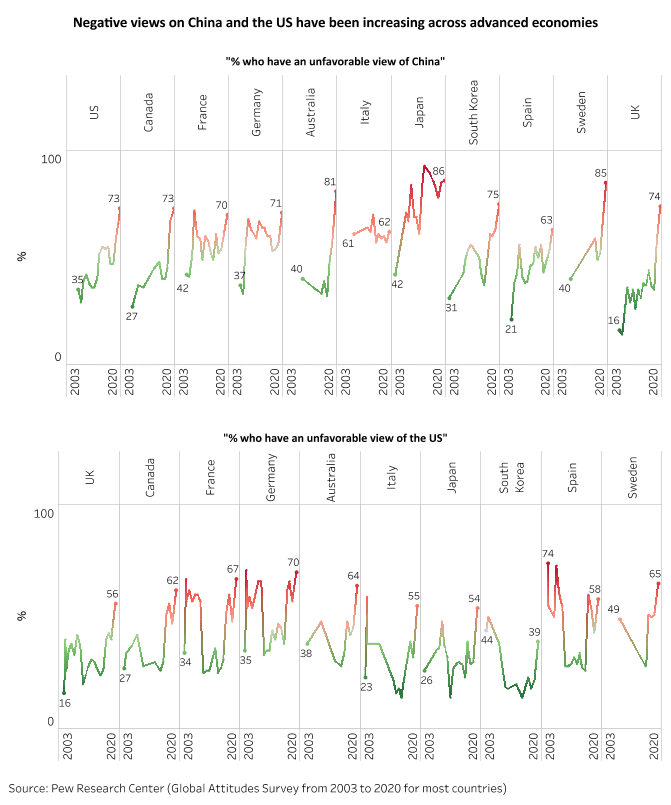 Anti-China sentiment has risen in recent years across advanced economies, including the US, Germany, the UK, and South Korea. In most countries, negative views on China have reached their highest point since the first opinion polls on this topic began more than a decade ago. The US’ reputation has also deteriorated in the past years, especially among some European countries. Both trends precede the Covid-19 pandemic but have been accelerated by it. The rising anti-China and US sentiment may have important implications moving forward. First, Beijing’s efforts to fill a vacuum in global leadership are unlikely to resonate across advanced economies – in fact, many governments have gradually toughened their line towards China over recent years. Second, in the US the key question is whether a Biden administration would improve the country’s image abroad or whether its unpopularity – especially among traditional European allies – will continue regardless of the election outcome.

The G20 are expected to take a decision on the future of the Debt Service Suspension Initiative (DSSI) during a meeting of finance ministers and central bank governors on 14 October. G7 governments – representing one third of G20 members – already expressed their preference for extending the DSSI as well as to agree a framework for case-by-case debt restructurings, including mandatory participation of the IMF and private sector creditors. However, it remains to be seen whether other G20 members, most notably China, will follow this line. In fact, the G7 statement once again criticized unnamed G20 countries for failing to classify debt owed to large state-owned, government-controlled financial institutions to fall under the realm of DSSI.

With both sides accusing each other of violating the Moscow-brokered ceasefire, which started on 10 October, diplomatic efforts to halt fighting over Nagorno Karabakh will continue. While a rapid resolution of the conflict seems unlikely, it is not expected to evolve into a larger regional conflict in which Turkish or Russian troops are fully involved. There is no immediate danger to the oil and gas pipelines passing through the region, although attacks on them cannot be completely ruled out.

On 15 October, President Cyril Ramaphosa will present an economic recovery plan at a joint sitting of parliament. Ramaphosa has pledged “extraordinary measures” to boost South Africa’s teetering economy, but the leaked draft plan largely rehashes old ideas around infrastructure, localization and “reindustrialization.” Given the government’s poor implementation track record, Ramaphosa will try to gain credibility by attaching timelines to deliverables such as fast-tracking the licensing of own-generation and the “financial and operational stabilization” of Eskom. The plan will be presented just one week ahead of what will likely be a devastating Medium-Term Budget Policy Statement (MTBPS) on 21 October.

Another delay on the way to a post-Brexit trade agreement is likely this week. The initial idea had been for EU heads of state or government to sign off on such a deal at their 15-16 October European Council meeting. Likewise, British PM Boris Johnson had set a 15 October deadline for there to be a deal. Now, however, it is likely that EU leaders will be briefed on the progress made in the talks so far, greenlighting intensive “tunnel” negotiations to be held during the second half of October. This timeline would still leave enough time for the European Parliament to ratify an eventual deal in time for a 1 January starting date.

Ankara announced plans late on 11 October to send the research ship Oruc Reis to the Eastern Mediterranean to carry out a seismic survey over the next 10 days. This is likely to revive tensions with Turkey’s NATO ally Greece. The Turkish navy said the Oruc Reis vessel would carry out activities in the region, including the south of the Greek island of Kastellorizo, until 22 October in a message sent to the maritime alert system NAVTEX.

Opposition leader Anwar Ibrahim will meet Malaysia’s king on 13 October. Anwar has said he will prove to the monarch that he has majority support from parliament, which, if true, could lead to either early elections or him taking the position from Prime Minister Muhyiddin Yassin. Meanwhile, some movement and business restrictions will be reimposed in Kuala Lumpur, Selangor and Putrajaya due to rising incidences of domestic transmission of Covid-19

The lower house of congress will resume session on 13 October ostensibly to pass the 2021 budget. However, the session could instead be marked by a showdown between two competing legislators for the speakership of the House, which has threatened to delay the budget.

Protesters will again gather on 14 October to demand the prime minister’s resignation, changes to the constitution and reform of the country’s monarchy. One protest leader signaled an effort to focus the protests around Government House, and to sustain their presence on the streets for beyond a few days. The bulk of the participants are still expected to be students, which could limit their ability to sustain their presence in the streets and provoke a response from the government.

Progress towards a more centrally coordinated pandemic management is likely when Chancellor Angela Merkel and the 16 regional state leaders meet on 14 October. This is the result of a worsening pandemic backdrop over the last week or so. In response, several regional leaders have called for a return to a more unified approach, perhaps including a nationwide “traffic lights system” that would transparently specify the restrictive measures to be implemented locally at different infection thresholds. The distribution of ICU beds and qualified personnel and the constitutional basis for further restrictive measures are also being discussed. Overall, the country is moving closer to a more restrictive and more coordinated approach after months of decentralized management.

The government will issue a new decree reinforcing measures to contain the pandemic as the number of infections surges. Restrictions on private parties, amateur sports activities and social gatherings are expected to be part of the new curbs. The next set of regulations could also see quarantines of people who tested positive for the virus reduced to 10 days from 14.

After a strong performance in the first round of parliamentary election on 11 October, opposition center-right Homeland Union-Lithuanian Christian Democrats (TS-LKD) has emerged as the favorite to form the next government. Out of the 70 mandates elected on a proportional basis from national party lists in the first round, TS-LKD won 23 seats, the ruling Lithuanian Farmers and Greens Union (LVZS) secured 16 mandates, populist Labor Party (DP) got nine seats, liberal newcomer Freedom Party (LP) and the center-left Lithuanian Social Democratic Party (LSDP) secured eight seats each and the Liberal Movement (LM) got 6 seats. TS-LKD is the favorite in the second-round runoff on 25 October, where the remaining 71 seats will be allocated under a majoritarian system in single-mandate districts. The TS-LKD-led government would be a positive outcome for governance and reforms.

18 October marks the one-year anniversary of the outbreak of Chile’s most serious outbreak of social unrest since the return to democracy. A resumption of protests in recent days has security forces on alert amid continuing controversy over heavy-handed policing. An agreement to stage a referendum on whether to re-write the constitution came out of the protests. That referendum will take place on 25 October after it was postponed because of the Covid-19 pandemic. Any serious incidents of violence between now and the referendum could have the effect of lowering turnout (for a process which requires high participation if it is to have legitimacy) and/or increasing the “no” vote in opposition to a new constitution, even if this is likely to remain a minority.

The first round of presidential and legislative elections is scheduled to hold on 31 October. President Alassane Ouattara, who is running for a controversial third term in office, faces three opposition contenders. The polls are still likely to go ahead even though parts of the opposition have threatened a boycott unless the government agrees to last-minute reforms of key electoral bodies.