Foreign ministers from the US, Australia, India and Japan will meet in Tokyo to discuss common regional concerns. In South Africa, four trade unions will join forces in a one-day strike. The EU has sanctioned Belarusian officials. Meanwhile, Indonesia’s parliament might pass a job creation bill, the first round of Lithuania’s parliamentary elections takes place on 11 October, Chile is at risk of new social unrest, and Nigeria’s ruling party faces another test in an upcoming state election. 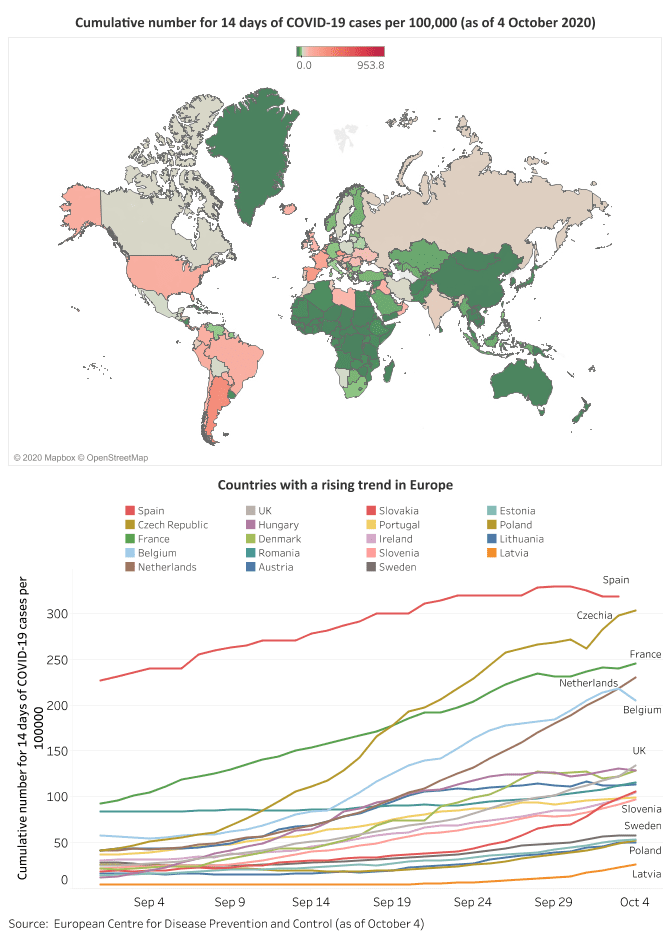 New spikes in Covid-19 infections are now happening in many countries around the world. This is the case particularly in Europe, where cases are rising in most countries – particularly in Spain, the Czech Republic, France and the Netherlands. Meanwhile, in Latin America, the numbers of positive cases are still comparatively high and testing capacity is more limited. Some countries in the region seem to be flattening the curve (Colombia, Peru, Brazil) while others (Argentina) are still on a clear upward trend. Outside these two regions, Israel and Lebanon have also followed a worrying rising trend for weeks. Against this backdrop, new restrictions and the extension of existing ones might be inevitable as questions continue around countries’ testing capacity, and the long-range economic fallout becomes more apparent. The emergence of protests and citizens’ discontent is a factor to watch during this phase of the pandemic.

The Japanese government will host the second-ever “Quad” foreign ministers’ meeting on 6 October. The foreign ministers of India and Australia – as well as US Secretary of State Mike Pompeo, who said he would still attend but cut short a trip to the region after President Donald Trump was hospitalized with Covid-19 – will meet with Japanese Foreign Minister Toshimitsu Motegi to discuss plans to deepen cooperation in areas such as maritime security, supply chain resilience, and infrastructure investment. The meeting marks another step in the formalization of what has been an informal grouping of democracies aimed at countering China’s influence. Moreover, the meeting also serves as a sign that new Japanese Prime Minister Yoshihide Suga will build on his predecessor’s efforts to strengthen relations among China’s neighbors in Southeast and South Asia.

The outcomes of the ANC’s weekend National Executive Committee (NEC) gathering will make headlines.Bleak Q2 figures including a 16.4% GDP contraction and 2.2mn job losses heighten pressure on the ruling party to push measures to boost South Africa’s economic outlook, though expectations will be low. To demand “urgent action from policymakers” against harsh socio-economic conditions, unemployment and corruption, four trade union federations – including ANC alliance partner COSATU – will join forces in a one-day strike on 7 October. The unions have warned of further strikes in the coming months.

On 2 October, the EU imposed visa bans and asset freezes on 40 senior Belarusian officials considered responsible for the post-election violence against protesters. The Minsk government has swiftly retaliated with visa bans against “the most biased representatives of European institutions and EU member states”, although the list of sanctioned individuals and institutions has not been released. Russia’s foreign ministry said that Belarusian sanctions against EU officials will be automatically applied by Russia too. While these EU sanctions are raising pressure on Lukashenko, they will not undermine the stability of his regime. In addition, Minsk may introduce additional sanctions on the Baltic States, which have imposed unilateral restrictions on Belarus. The question of EU sanctions on Turkey, meanwhile, has been delayed until December.

A Canadian warship sailed through the Taiwan Strait recently, following a similar passage in September 2019. Both the People’s Liberation Army and the US Navy have been active in the strait this year, and Canada’s relations with China have been strained since the arrest of Huawei Chief Financial Officer Meng Wanzhou in 2018.

Parliament will attempt to pass by the end of this week the omnibus bill on job creation. This is part of President Joko Widodo’s ambitious effort to reform the country’s investment environment. However, early indications suggest that the most awaited components such as reforms of rigid labor laws or of the educational system have been watered down to avoid controversy.

The government will seek to extend the current state of emergency until 31 January 2021 despite objections from the opposition. New Covid-19-related restrictions, including making the wearing of masks obligatory outdoors countrywide and an early closure of bars and restaurants, are also expected to be imposed shortly to stem a surge in cases.

A tight race between the ruling Lithuanian Farmers and Greens Union (LVZS) and the opposition Homeland Union-Lithuanian Christian Democrats (TS-LKD) is expected in the parliamentary election on 11 October. In the first round, 70 deputies (out of 141) will be elected on a proportional basis from national party lists and 71 deputies will be elected in single-mandate districts under a majoritarian system. If candidates in single-mandate districts do not secure an outright majority of votes, a run-off between top two contenders will be held on 25 October. If both LVZS and TS-LKD win a similar number of mandates, the third largest parliamentary group after the election will emerge as kingmakers of the new government. This is likely to be the Lithuanian Social Democratic Party (LSDP), which would be more inclined to support the ruling LVZS.

Lead negotiators will meet again this week. The issues of state aid and fisheries appear to be central elements as both sides seem to be inching closer to a deal. A delay until after the mid-October European Council would still allow for the European Parliament signing off on any trade deal in time for a 1 January start.

Priority will be given this week to finding alternatives to finance a new cash transfer program. This follows last week’s government backdown from fiscally questionable proposals to finance this program. From now on, discussions will focus on the review of other social programs, the end of income tax deductions, or new taxation on dividends. There are no deadlines to be met this week and the whole body politic is sensitive to the proximity of the municipal elections in November, which tend to delay work in Congress, especially in the lower chamber. The most ambitious items such as the tax reform will not be seriously addressed this week or any time before the elections.

The government will be under pressure this week following an incident that took place during protests in Santiago on 2 October. Video footage appears to show a police officer (“Carabineros”) manhandling a 16-year old protestor off a bridge into the Mapocho river. The incident revives questions about heavy-handed policing at an especially sensitive moment – the one- year anniversary of last year’s outbreak of serious unrest is coming up on 18 October, while the referendum on a new constitution takes place on 25 October. Opposition parties are now threatening to file a motion of censure against Interior Minister Victor Perez, who has only been in his post since late-July.

Amid persistent turmoil within the ruling All Progressives Congress (APC), the 10 October Ondo state election will be another test of the party’s strength in the country’s south. Following last month’s defeat in Edo state, the incumbent APC governor is faced with strong opposition from the People’s Democratic Party (PDP) as well as the locally popular Zenith Labor Party (ZLP). Similar to the Edo state poll, infighting between factions supporting and opposing south-western powerbroker Bola Tinubu could cost the party crucial votes.