The EU is unlikely to impose economically meaningful sanctions on Turkey. In Peru, political tensions are likely to remain high even after President Vizcarra survived an impeachment vote. Poland’s coalition government has been weakened after a divisive vote in parliament. Meanwhile, China’s TikTok will avoid a ban on downloads from US app stores after the Trump administration approved the Oracle deal, Germany’s coalition government will once again disregard the constitutional “debt brake”, Brazil’s Congress will continue working on the federative pact and tax reform, and in Nigeriathe victory of the opposition in a state gubernatorial election could have implications for the ruling APC’s future leadership. 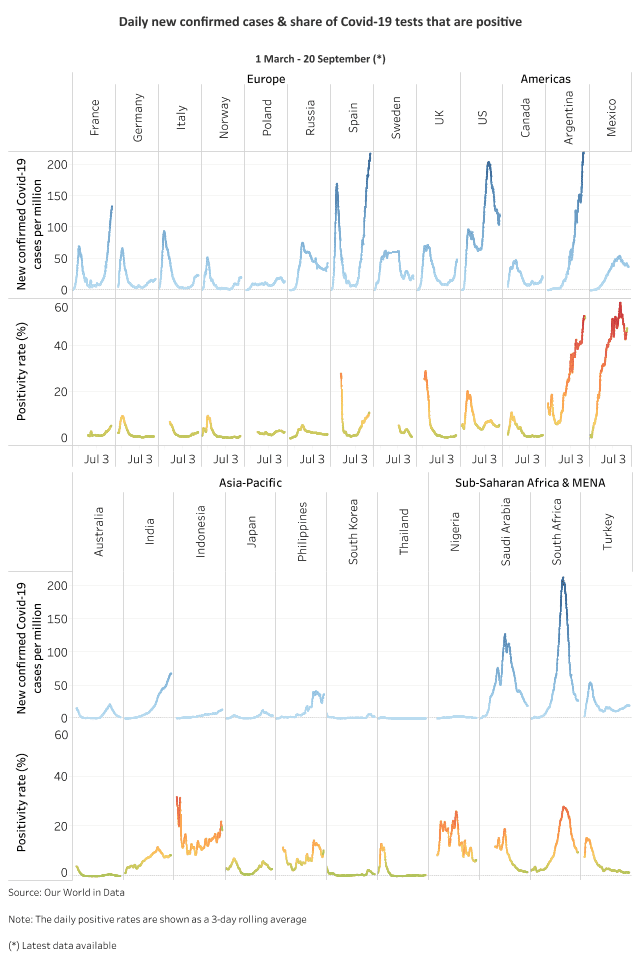 As the Covid-19 pandemic continues around the world, there is increasing concern about the possibility of new nationwide lockdowns. This is the case particularly in Europe, where cases have been rising for weeks almost everywhere. Rising positivity rates – defined as the number of confirmed cases divided by the number of tests – suggests that the increase in Covid-19 cases is not the result of more testing. Latin America continues to be one of the most affected regions, but some countries have started to gradually ease lockdown measures. In the weeks ahead, governments in high Covid-19 incidence countries will have to navigate carefully amid fears of hospitals being overrun. Countries where institutional capacity (i.e., efficient testing and track and tracing systems) and political effectiveness are structurally low might be at higher risk of returning to more stringent lockdowns.

The European Council will hold a strategic discussion on Turkey on 24 and 25 September. However, the summit is unlikely to impose economically significant sanctions on Turkey over the country’s territorial dispute with Greece in the Eastern Mediterranean. Given the Cypriot insistence on EU action in exchange for Belarus sanctions, symbolic measures against individuals appear to be the most likely outcome.

President Martin Vizcarra may have survived an impeachment vote held late on 18 September, but there is unlikely to be any easing of tensions between the executive and Congress. Vizcarra has suffered a blow to his credibility with the release of audio tapes apparently implicating the president in an attempt to cover up the possible misuse of public funds. Meanwhile, some parties want to block or dilute political reforms that need to be approved by 28 September in order to be applicable for the 2021 electoral process, while there is also an effort underway to fast-track changes to the selection process for the Constitutional Court (TC). Political sparring will therefore continue to be a distraction from the urgent priorities of managing the Covid-19 crisis and reactivating the battered economy.

The ruling Law and Justice (PiS) party will decide this week whether to sever its ties with its two junior coalition partners. Last week, both parties failed to back a contentious bill regarding animal rights, advocated by the PiS leader Jaroslaw Kaczynski. The breakup of the governing coalition would leave Mateusz Morawiecki’s government without a majority in the lower house of parliament. This would weaken the government’s ability to advance its policy agenda, increasing the chances of an early general election before the end of the current term in 2023.

US President Donald Trump said that his administration will approve a deal for ByteDance to sell a minority stake in TikTok’s US operations to Oracle and Walmart. This decision enables TikTok to avoid a ban on downloads from US app stores that would have taken effect on 20 September. The Treasury Department said formal approval by the Committee on Foreign Investment in the US (CFIUS) is still pending, but the Commerce Department said that the ban on downloads will be delayed for seven days. Meanwhile, a US federal district court issued a preliminary injunction blocking enforcement of the ban on WeChat. In a lawsuit challenging Trump’s executive order in August, a group of WeChat users argued that the ban would violate their First Amendment rights to free speech. The injunction delays implementation of the ban pending a final decision on the lawsuit.

Chancellor Angela Merkel’s grand coalition cabinet will on Wednesday sign off on the draft budget for 2021 as well as the medium-term fiscal plan until 2024. Next year’s budget envisages new debt of some EUR 96bn, thus breaching once again the constitutional “debt brake”. In its longer-term projection, the government plans to return to compliance with debt rules as of 2022, progressively lowering the amount of new liabilities to be taken on every year. However, there is growing debate on whether past the September 2021 Bundestag elections, tax increases will be required to get public finances under control again.

Local elections scheduled for September 27 will test voters’ preferences ahead of the December general election. The ruling National Liberty Party (PNL) and an alliance between two liberal parties – Save Romania Union and Freedom and Solidarity Party (USR-PLUS) – are expected to significantly weaken the electoral strength of the center left Social Democratic Party (PSD), which claimed a convincing victory in the 2016 local vote. Meanwhile, political battles will also take place in parliament, where controversial amendments to the 2020 budget – including a 40% pension increase as of September, pay hikes for teachers and an introduction of a debt ceiling of 40% of GDP – will be considered. If adopted, the amendments would likely be challenged in the constitutional court by the ruling PNL.

This week Congress should resume work on constitutional amendments for both the federative pact and the tax reform. The federative pact is perceived as a possible way out for the government’s new flagship cash transfer program. It would free revenues by doing away with mandatory earmarks and setting triggers that allow government to cut spending. Government has outsourced the effort to Congress and much of it now depends on the efforts of the rapporteur of the constitutional amendment, Márcio Bittar. Meanwhile, the leader of the government in the lower house, Ricardo Barros, said the government will send a complementary proposal on a tax reform this week. The government is attempting to link the presidential veto on an extension of the payroll tax until 2021 to the tax reform – but a vote on the veto has in any case been scheduled for 30 September if progress on the reform is not discernible by then. Lastly, the administrative reform may also move this week, as the constitution and justice committee (CCJ) resumes its work.

The opposition victory at the 19 September Edo state gubernatorial election will dominate headlines at the start of the week. The decisive victory of incumbent governor Godwin Obaseki represents a severe setback for the presidential ambitions of Bola Tinubu, the south-western powerbroker of the ruling All Progressives Congress (APC). Obaseki had come to office on the APC’s platform in 2016 but defected to the opposition People’s Democratic Party (PDP) ahead of this election. Having been affiliated with the anti-Tinubu faction within the APC, Tinubu’s allies had managed to deny Obaseki the party’s governorship nomination. Following the defeat of his candidate in Edo state, Tinubu will struggle to determine the next APC chairman in December, and, subsequently, to win a majority in the party’s presidential primary in 2022.