The Trump administration will announce sanctions on US imports from western China’s Xinjiang region. Yoshihide Suga will be selected as Japan’s next PM. Belarusian President Lukashenko will meet his Russian counterpart. South Africa’sgovernment could relax Covid-19 related restrictions. Leaders of the EU and China will meet today for a video summit. Meanwhile, protests continue in Thailand, Russia’s municipal election have been mostly favorable for President Putin’s United Russia, the fallout from last week’s violence will continue in Colombia, and in Cote d’Ivoire the exclusion of opposition leaders ahead of the presidential election could trigger violent protests. 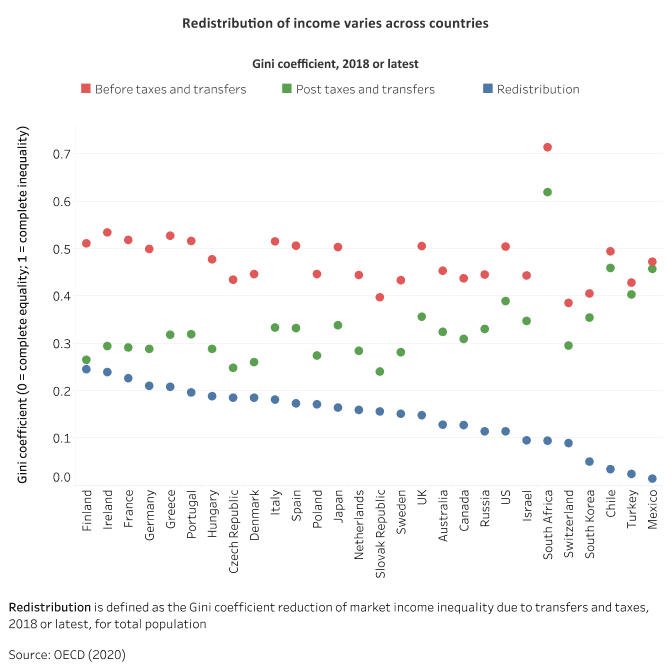 The impact of redistributive policies varies widely across OECD countries, even at similar levels of inequality before taxes and transfers. The highest redistribution takes place in countries such as Finland, Ireland and France and the weakest in emerging markets such as Chile, Turkey and Mexico. The effectiveness of taxes and social transfers in the reduction of market income inequality is observed when comparing Ireland and France with the US and the UK. The four countries have similar levels of inequality before taxes and transfers, but the former two present much lower levels of inequality after taxed and transfers. Against the Covid-19 backdrop, calls for a stronger redistributive role of the state might add pressure on governments not only to extend and reinforce welfare institutions but to improve their effectiveness.

The Trump administration is prepared to announce sanctions on US imports from western China’s Xinjiang region. This is the site of alleged human rights abuses against Uighur Muslins, including cotton and tomatoes. A White House announcement of the ban was reportedly delayed from last week. US Customs and Border Patrol may issue a “Withhold Release Order” enabling the agency to seize shipments that are suspected of being produced by forced labor. But China’s garment industry may be able to fill the gap with imported cotton.

Yoshihide Suga won an overwhelming victory in the Liberal Democratic Party’s (LDP) leadership election on 14 September. This victory clears the way for him to be selected as Shinzo Abe’s successor as prime minister and form a new government on 16 September. In a press conference following his victory, Suga outlined key priorities for the new government and dismissed rumors that he could call a snap election in the coming weeks.

On 14 September, President Alexander Lukashenko is meeting his Russian counterpart Vladimir Putin in Sochi (Russia). The presidents are not expected to sign any official documents, nor will they hold a press conference afterwards. Lukashenko’s visit follows a series of high-level bilateral meetings in recent weeks and could pave the way for a deeper economic, political, and military cooperation in the future. Ultimately, this could exacerbate Minsk’s dependence on Moscow.

The government might ease pandemic lockdown restrictions to “Level 1” this week. President Cyril Ramaphosa is expected to address the nation later this week. While social distancing requirements are expected to remain in place, the government has begun to favor a broader economic opening amid declining infection rates and Finance Minister Tito Mboweni’s caution that South Africa’s 2020 GDP print may underperform the Treasury’s already bleak forecast of a 7% contraction. For its part, the South African Reserve Bank (SARB) is expected to provide limited further rate cuts in its monetary policy committee (MPC) meeting this week.

Leaders of the EU and China will gather for a high-level video summit today. The format replaces the initially planned meeting of Chinese President Xi Jinping with the leaders of all 27 EU member states. Instead, only German Chancellor Angela Merkel will, as the holder of rotating Council presidency, join the heads of the Brussels institutions in their meeting with Xi today. Despite recently tougher rhetoric, there is still hope for the investment agreement talks to be concluded by year-end. There is also optimism in the EU that Beijing might become more cooperative on climate issues if the next US administration were to return to the Paris agreement.

Parliament opens for its monsoon session on 14 September. This is the first time than an important procedural modifications will be made to the way the body conducts its business following the Covid-19 pandemic, even as infections rise to unprecedented levels in the country. Important legislation around procurement of agricommodities, the Chinese intrusions along the border and the tanking economy are expected to be taken up. The session ends on 1 October.

The student-led Free People’s movement is planning a major protest on 18 September. This could be another important marker for its efforts to sustain the pressure on the government for pro-democracy reforms and the outlook for stability. The government has written universities to disallow protests on their campuses and over the past month has prosecuted several prominent dissidents. Should the size of the demonstration be markedly larger than that of the previous month, then apprehension of a more forceful suppression of the movement or even military intervention will grow.

Turkish seismic research vessel Oruc Reis returned to waters near the southern province of Antalya on 13 September. This move should ease tensions between Ankara and Athens in the Eastern Mediterranean. Diplomatic talks are expected to follow but a solution to the complex dispute remains unlikely.

The ruling United Russia (UR) party and its supported candidates convincingly won most electoral battles in various level votes that ended on 13 September. According to preliminary results, incumbents won gubernatorial elections in all 18 regions where votes were held, while UR candidates claimed victories in three out of four by-elections to the State Duma. The ruling party secured most seats but lost its outright majorities in Novosibirsk and Tomsk city councils, where a few associates of opposition leader Alexei Navalny secured victories as well. One signpost to watch is whether allegations of electoral irregularities trigger any protests.

The Commons will debate the controversial UK internal market bill for its second reading today. At the end of this step, the bill will be passed on to committee stage where pragmatic Tory MPS will likely try to add amendments to it. However, given the large Tory majority, it appears unlikely that the bill would be changed in a meaningful way through parliamentary channels. The formal negotiations between both sides remain the central arena for any potential progress towards a deal between the UK and the EU.

This week the option to include the new long-awaited cash transfer program Renda Brasil in the federative fact proposal should be scrapped. Instead, a less ambitious inclusion into the constitutional amendment on spending cap triggers might materialize. Government will thus leave the issue of the value of the cash transfer to a later stage, once there is clarity as to how much fiscal space will exist to justify the program. Furthermore, discussions on a tax reform will also continue with a focus on a controversial fund demanded by states and municipalities to cover transitional costs from the current to the new regime – which is strongly opposed by the government. Lastly, the government should also decide on whether to question a decision by a Supreme Court (STF) judge to require President Jair Bolsonaro to testify personally, not in writing, in the case where he is investigated for interference in the Federal Police.

The fallout from last week’s outbreak of rioting and violence will continue this week. At least 14 people were killed and dozens more injured in a wave of protests that broke out following the death on 9 September of an unarmed man, Javier Ordonez, at the hands of the Bogota police, allegedly for a violation of Covid-19 social distancing rules. Protests quickly spread to other cities, though the most serious incidents were seen in Bogota, where dozens of neighborhood police stations were destroyed. The government claims that guerrilla groups infiltrated the protests. Be that as it may, it is increasingly clear that the social tensions that led to 2019’s protests persist and that it only takes a spark to set off serious unrest.

The anticipated exclusion of prominent opposition figures from the official candidate list for the upcoming presidential election is likely to trigger violent protests. The constitutional council is expected to invalidate the candidacies of former president Laurent Gbagbo and former national assembly president Guillaume Soro when releasing the final list on 16 September. Both have been convicted by Ivorian courts in absentia and, as such, have forfeited their right to stand in elections. While their exclusion is a foregone conclusion, their supporters are nevertheless expected to protest the official announcement. Such protests would be far more widespread and violent though if, as has been rumored, the candidacy of former president Henri Konan Bedie would be invalidated on technical grounds as well.