The German chancellor is increasing the pressure on the Russian government in the Navalny case. There is renewed speculation about a no-deal UK exit from the Brexit transition period. In South Africa, recent economic data shows the country’s difficulties with the post-pandemic recovery. Meanwhile, journalists for US news outlets have been denied Chinese visa renewals, Russia’s upcoming regional elections will serve as a test for the ruling party’s popularity, Brazilwill hold party conventions for the November municipal election, and the Ethiopian government wants to carry out regional elections this week despite opposition from the upper house. 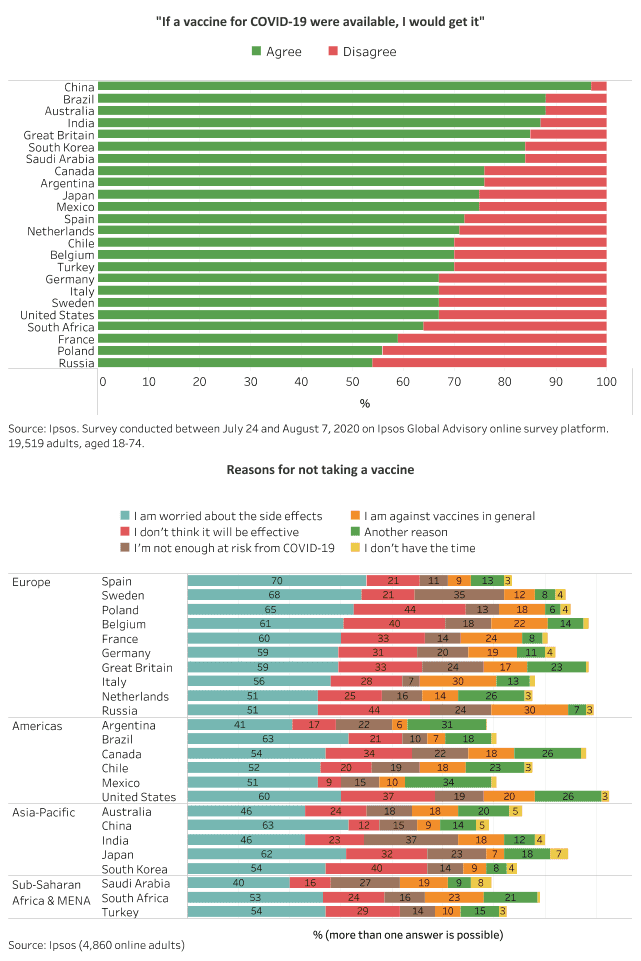 The race for a Covid-19 vaccine is becoming increasingly politicized across different countries. In some places, political pressure to approve a vaccine risks undermining the necessary public confidence. Recent surveys suggest that in countries such as Italy, Germany, France, the US and Russia a significant part of the population – between 30 and 45% – is reluctant to get a Covid-19 vaccine once this is available. The reasons for this reluctance are varied, but many worry about the vaccine’s side effects, its effectiveness, or they oppose vaccination more generally. In Italy and Russia, for instance, between those who would not get a Covid-19 vaccine if this was available, 30% are against vaccines in general. On top of this, global cooperation for vaccine allocation could prove challenging.

In the Navalny case, Germany keeps ramping up the pressure on the Russian government. Chancellor Angela Merkel is adding to doubts over Berlin’s remaining degree of commitment to Nord Stream 2. However, stopping the project at this stage would trigger complicated and expensive compensation claims that would probably have to be addressed at the European level. Domestic political support for such a bold move is also not yet obvious. Instead, the hope will be that Russia returns to a more cooperative stance on open geopolitical matters, for instance in the context of the Belorussian president’s upcoming visit to Moscow.

A new round of Brexit trade negotiations is taking place this week. The atmosphere between both sides is at its lowest in a long while, after the UK government has made it clear that it seriously considering a no-deal exit from the transition if there is no agreement by 15 October. Furthermore, the UK has fueled speculation over its willingness to fully comply with the Northern Ireland protocol. All this, however, seems in line with PM Boris Johnson’s long-standing mantra that Brussels must be threatened with no-deal for there to be a good outcome for the UK.

Q2 GDP figures, released on 8 September, showed that the economy shrank by an annualized 51%. The figures underscore the impact of the pandemic-related shutdown on an already feeble economy. While most of the economy has been allowed to reopen in Q3, electricity shortages highlight just how poorly positioned South Africa is for a post-pandemic recovery. The Q2 print will sharpen Finance Minister Tito Mboweni’s excruciating fiscal conundrums ahead of October’s medium-term budget. President Cyril Ramaphosa has promised yet another economic recovery plan, but expectations will be very low given the administration’s abundance of plans and its poor track record on implementation.

China has declined to renew visas for journalists at US news outlets as retaliation against US curbs on Chinese state media journalists in the US. The US State Department has declined to issue new visas for Chinese journalists, who are facing expulsion after a 90-day grace period expires in early November. In China, journalists of various nationalities who work for the Wall Street Journal, CNN, and Bloomberg have received letters enabling them to work under expired press credentials for two months, after which they face similar expulsion. A Chinese foreign ministry spokesperson said that that Beijing “would be glad to continue our excellent cooperation with the US journalists here if Chinese journalists are treated fairly in the US.” The latest back and forth follows earlier rounds of expulsions of journalists from both countries.

Prime Minister Kyriakos Mitsotakis will deliver a speech on September 12 at the Thessaloniki International Fair. The speech is expected to focus on the temporary interventions being made by the government to shield the economy from Covid-19, as permanent tax cuts have been shifted to next year.

Regional elections on 13 September will test the ruling United Russia party’s popularity ahead of the 2021 general election. The outcome of the vote may lead to protests in some places. Some of the regions holding gubernatorial elections – including Arkhangelsk, Irkutsk, or the Komi Republic – have a history of dissent and have expressed only lukewarm support for the constitutional amendments initiated by President Vladimir Putin earlier this year.

With the Independence Day holiday on 7 September, the short political week will mostly see party conventions for the November municipal elections. A significant share of Congress is involved in the elections, with a great number of representatives running for mayor in state capitals and major cities throughout the country. Engagement by representatives and senators in mid-term elections can be explained by the fact that they can keep their federal mandates in case of defeat at the local level – contrary to presidential and gubernatorial elections which coincide with those for the whole of the House and one or two-thirds of the Senate.

Finance Minister Arturo Herrera will today, 8 September, unveil the draft 2021 budget to Congress. The sharp economic contraction expected this year will clearly impact the 2021 budget and could see overall government spending come in lower than this year. President Andres Manuel Lopez Obrador (AMLO) continues to rule out any major fiscal reform or new debt issuance. Nor are the rainy-day funds bottomless, as Herrera has warned. While austerity may be the overriding feature of the 2021 budget, AMLO insists that his flagship infrastructure projects and social programs are the key to economic reactivation. Both chambers must approve the income side of the budget by the end of October, and the whole package must be passed by mid-November.

The Tigray authorities insist they will carry out regional elections on 9 September. The House of Federation (upper house) has declared the plan unconstitutional, given that national and regional elections have been postponed into 2021 on account of the Covid-19 pandemic. The standoff will represent another test for Prime Minister Abiy Ahmed’s administration shortly after mass protests shook his Oromiya home base. Abiy’s fragile transition project is increasingly at risk of being derailed by regional divisions and political violence, including mass unrest and even the latent threat of a coup.

EU-based carriers remain barred from Nigerian airspace as international flights resumed on 5 September.Airlines such as Germany’s Lufthansa, France’s Air France and the Netherland’s KLM remain barred from flying to Nigeria as the government follows through with its earlier announcement to grant landing rights only on a reciprocal basis. In contrast, West African neighbors Ghana, Cote d’Ivoire and Senegal have come to an agreement with EU countries granting their respective airlines access to each other’s airspace.