In Belarus, protests continue against President Lukashenko. In South Korea, the surge in Covid-19 cases has caused the reintroduction of public health measures. In Venezuela, opposition leader Juan Guaido will present his plan to bring opposition parties together. In South Africa, the president and the finance minister will appear before parliament this week. Meanwhile, in the Philippines a rather limited economic stimulus package is expected to be approved, Germany’sgovernment could approve new restrictive measures after a recent increase in Covid-19 cases, Brazil’s government will present a proposal for an infrastructure package, and Nigeria’s economy suffered the sharpest quarterly decline on record. 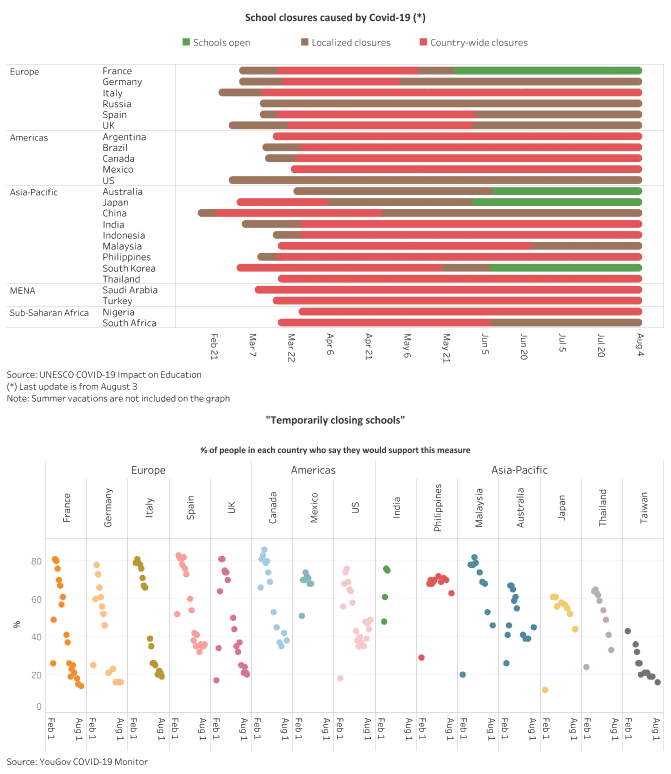 Covid-19 is significantly impacting children’s education around the world. In some countries, such as Italy, Argentina, India and Turkey, schools have been closed since March. Several other countries have implemented localized closures, such as Germany, where schools started to reopen in early August. Unlike at the beginning of the pandemic, citizens appear to be increasingly reluctant to support the temporary closure of schools, particularly in the largest European countries. In emerging markets, where schools are often a source of social protection and nutrition and parents cannot work from home, the situation is particularly difficult. The issue of school reopening is therefore becoming politicized across the globe as teachers’ unions are leading the opposition to an early reopening. In the upcoming weeks, the question to watch is whether governments and educational institutions have the capacity to implement the required strategies to reopen schools safely.

Mass protests and strikes at state-owned companies are set to continue across the country for the third straight week after the 9 August presidential election. Despite mounting domestic and international pressure, disputed President Alexander Lukashenko is unlikely to step down unless he loses control over the country’s coercive apparatus. There have been no large-scale defections until now. Time benefits Lukashenko as the protest momentum could start waning in the absence of leadership and a clear plan for a transition.

Seoul has introduced additional social distancing guidelines and other public health measures – including a mask requirement – as the number of Covid-19 has continued to surge. The national government has also warned that it could reintroduce nationwide controls if the outbreak does not abate. South Korea recorded 397 new cases on Sunday, 23 August, the most since 7 March. As it considers reintroducing more stringent measures, the Moon administration will have to contend with resistance from conservatives – particularly among protestant churches – as well as rolling doctors’ strikes in response to a plan to expand access to medical schools.

Opposition leader Juan Guaido, who is recognized as interim president by almost 60 countries, is due to unveil details of an opposition “unity pact” this week. Last week, Guaido called on other prominent opposition figures to contribute to a joint roadmap to confront President Nicolas Maduro. Guaido’s call for an opposition relaunch comes as the regime presses ahead with its plans for the December legislative elections, which the Guaido-led opposition is boycotting. Guaido needs to rally the heterogeneous and division-prone opposition because after December, his own legitimacy will come under question since he will no longer be National Assembly president. With only one in three Venezuelans supportive of public protests, taking to the streets is not a feasible option.

President Cyril Ramaphosa and Finance Minister Tito Mboweni are due to answer questions in parliament this week.These will focus on the IMF loan, the infrastructure build program and pandemic-related corruption. The latest procurement scandals puncture the myth of a ‘new and improved ANC’ under the president’s leadership. Combined with the pandemic’s economic fallout, the latest scandals could gradually weaken Ramaphosa’s position and even fuel doubts over his tenure in the long run.

Rumors are swirling around Prime Minister Shinzo Abe’s health after he made an unexpected hospital visit for the second straight week on 24 August. Officially, the visit was to receive the results of tests conducted during a lengthy hospital visit last Monday. Both visits, however, have raised suspicions amidst Abe’s limited press availability, reluctance to convene an early Diet session, and tabloid reports that his condition is more serious than the government has acknowledged. While Abe returned to the office on Monday afternoon, his health will continue to face heightened scrutiny even from within his own party as rivals and potential successors wonder whether a leadership contest will be necessary before Abe’s tenure ends in September 2021.

The country’s PHP 165bn (USD 3.4bn) stimulus bill is expected to be signed by President Rodrigo Duterte this week after the lower house ratified the bill’s modified version today. The Senate had approved the bill last week. The actual stimulus is only PHP 140bn, with the PHP 25bn being a standby fund, and is considered among the smallest in the region. With the Philippines having the highest number of Covid-19 cases and contact tracing still weak, the stimulus is unlikely to contribute strongly to a return of consumer confidence.

This week will likely see agreement on new measures to control the resurging number of new Covid-19 cases.Over the weekend, the daily number of new infections crossed the mark of 2,000 for the first time in months. The parties in Chancellor Angela Merkel’s government will meet for a meeting of the coalition steering committee on Tuesday, ahead of Merkel’s first meeting with the heads of the 16 regional states since June. Additional face mask requirements and new upper limits for private gatherings are expected, alongside first steps towards extending easier access to short-time work beyond the current end-date in December. New lockdown measures, however, are not on the agenda at this stage.

After 11 years in power, the pro-Russian Social Democratic Party “Harmony” and its ally “Honor to Serve Riga!” are expected to lose control of the country’s capital. The snap city council election is scheduled for 29 August. An alliance of the centrist “Development/For!” and the center-left “The Progressives“ is likely to win the greatest share of the ethnic Latvian vote, while their mayoral candidate, Matins Stakis, holds the best chance to lead the capital city. The city of Riga accounts for a third of Latvia’s population and generates two-thirds of its GDP. Nonetheless, the fragmented composition of the city council will likely lead to difficult post-election coalition talks and may complicate the governance of the city going forward.

This week Congress will continue to negotiate and vote on presidential vetoes, starting with eleven relating to an anticrime package. The government will also send a proposal to Congress for a BRL 5bn (USD 890mn) infrastructure package, which will require a negotiation to avoid a violation of primary deficit limits. This proposal may be part of a broader set of proposals that would cover in addition to public works, spending cuts, job creation measures and privatizations – the so-called “Big Bang” package. Finally, the government should also focus its attention on mending relations with the Senate after economy minister Paulo Guedes said the chamber had committed a crime in overturning last week a presidential veto on public servant wage increases until 2021.

Nigeria’s economy contracted by 6.1% in the second quarter, according to official figures released on 24 August. The reading represents the sharpest quarterly decline on record. Growth remains constrained by significantly lower crude oil output due to the price crash as well as commitments to an OPEC-mandated production cut. Amid a general slowdown of non-oil economic activity due to lockdown measures, foreign exchange rationing by the central bank hampers the importation of raw materials and insecurity weighs on agricultural production areas across the north.

The Bank of Zambia’s independence will be in the spotlight. On 22 August, President Edgar Lungu unexpectedly dismissed the respected Bank of Zambia governor Dr Denny Kalyalya with immediate effect, even though his contract was due to run until 2023. Speculation will be rife about the reason for Kalyalya’s replacement with Christopher Mphanza Mvunga, a former deputy finance minister who is considered a Lungu ally, at a time when Zambia faces a fast-mounting debt crisis.