Economic outlook – from bad to worse

The IMF now forecasts regional GDP to contract on average by 3.2% in 2020, against an earlier projection of 1.6%. In the context of high population growth rates across the region, the projected drop in real GDP per capita is particularly marked this year (-5.4%), which is expected to wipe out nearly a decade of gains. A recovery to growth of 3.4% next year is contingent on the region avoiding “the same epidemic dynamics that have played out elsewhere”, which is a rather big ‘if’ in the current climate of uncertainty.

The continent’s juggernaut South Africa faces a devastating 8.0% contraction. Notably, the IMF forecast is worse than the National Treasury’s revised projection of -7.2% presented in last week’s emergency budget, which saw the country’s already-bleak budget deficit forecast and debt-to-GDP ratio slip to once unthinkable levels. The assumption underpinning the IMF’s expectation that growth will rebound to 3.5% in 2021 is that “the authorities make progress in implementing policies to boost growth and stabilize public debt.” This seems optimistic in the context of structural constraints such as electricity shortages and political constraints on overdue economic reforms.

On the other hand, the unprecedented and deepening fiscal crises unfolding across the continent might indeed trigger reforms in some countries that hitherto seemed sealed to change. This might be reinforced by the prospects of potentially having to approach the IMF for comprehensive bailout packages contingent on reform commitments further down the line. For instance, Nigeria is increasingly signaling in this direction and seems increasingly committed to abandoning a costly fuel subsidy.

Faced with an increasingly bleak economic outlook and growing levels of public unrest, many countries in sub-Saharan Africa (SSA) are expediting the reopening of their economies, even though daily infection cases continue to rise unabated (see graph below). Meanwhile, testing capacities remain substantially inadequate across the continent, suggesting that policy decisions continue to be guided by political and economic considerations rather than robust datasets. Nevertheless, local policy responses are increasingly diverging:

The countries of the Economic Community of West African States (ECOWAS) appear to be ploughing ahead: by mid-June, a meeting of the grouping’s 15 foreign ministers recommended a gradual reopening of regional borders, but individual countries are going even further. In response to growing street protests, Senegal’s President Macky Sall announced the removal of nearly all of the remaining social distancing and containment measures on 1 July. International flights – a channel through which the first known Covid-19 cases were imported into the region – will resume the same day, a measure that had earlier been announced by Cote d’Ivoire as well.

By contrast, South Africa has pivoted from one of the strictest lockdowns worldwide to “Level 3” restrictions that have been progressively relaxed and increasingly disregarded on the ground. The restart is overwhelmingly driven by fears of a record recession. Yet South Africa has fast emerged as the continent’s biggest Covid-19 hotspot, with daily new cases still breaching new records. After the Western Cape, Gauteng is now emerging as the next epicenter and health system strain is becoming acute. Although testing has been ramped up to about 30,000 per day (the highest in the region), long delays in test results mean that quarantining and tracing often cannot happen in time to prevent further contagion. Hospitals are increasingly overwhelmed, reporting low oxygen stocks and disruption of services where personnel refuse to work for lack of PPE. As new cases and the death toll rise, the need for fresh, localized lockdowns is increasing in hotspots such as Gauteng, further compounding the unfolding socio-economic crisis.

Meanwhile, Rwanda remains the only SSA country on a list of 15 third countries that the EU currently considers safe enough to allow travelers to enter the Schengen area. Although tourism industries desperately need a boost, the EU decision may curb SSA countries’ enthusiasm to reopen their airspaces for flights from Europe and their ability to attract European tourists in the near future. 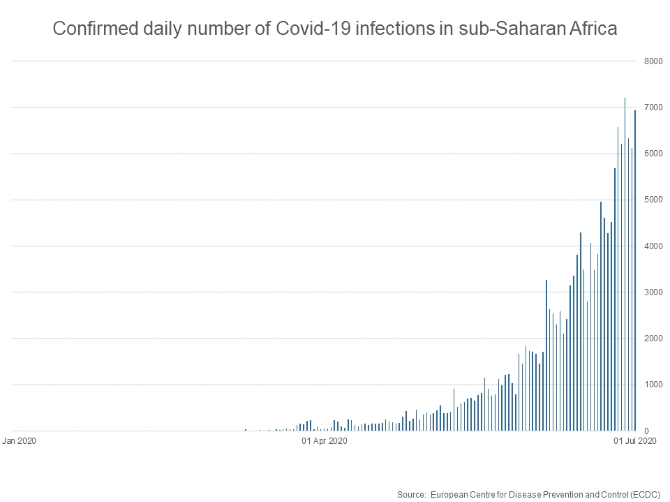