Germany’s presidency of the Council of the EU starts on 1 July. Rather than forcing a complete change to the topics Berlin had planned to prioritize, the pandemic has reframed many of these issues. This counts for the relationship with China (there is still hope for a winter edition of the Leipzig summit initially planned for September) as well as cooperation with African countries, climate change, the digital transformation, and questions around the rule of law in Eastern Europe.

The same is true of the need to agree the bloc’s next seven-year macro budget (MFF). For years, many in Brussels had expected that the task of finalizing a deal would eventually fall on Chancellor Angela Merkel. However, the virus recovery fund adds a new dimension to the MFF. The presiding country usually pays a financial price for an overall deal. This was already on display in Berlin’s changed positioning on joint debt issuances. That pattern might continue as Berlin tries to win over skeptical northern countries, all of which enjoy, just like Germany, rebates on their high per-capita contributions to the EU budget. Merkel aims to shore up the project to which Germany owes unprecedented peace and prosperity. Behind this is the extraordinary pandemic challenge, combined with growing volatility in relations with the US, China, and in Europe’s direct geographic neighborhood. 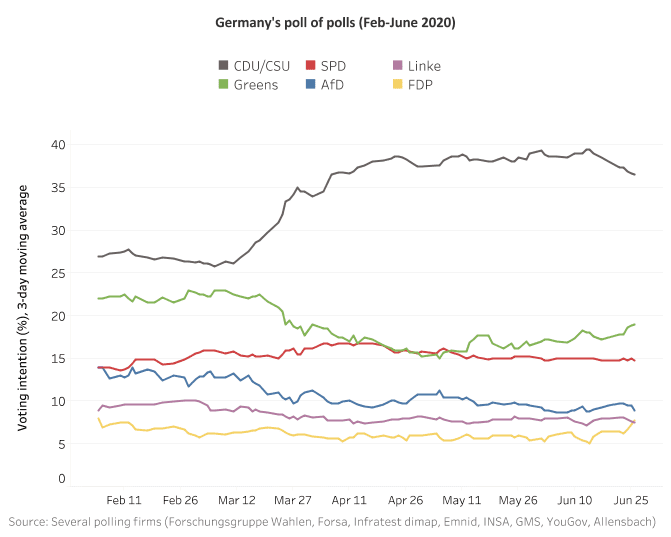 The presidency will be Merkel’s last major political initiative ahead of the the September 2021 elections. In December, the chancellor’s Christian Democrats will hold a conference to elect a new party leader. A decision on the CDU/CSU chancellor candidate is then expected for early 2021. As things currently stand, forming a government against CDU/CSU would be impossible. This would either mean a continuation of the grand coalition with the Social Democrats (SPD) or a new arrangement with the Greens. Much to the dismay of many within Merkel’s party, the alternatives to the chancellor’s centrist course would, therefore, be limited.

Betting on some movement, however, is the SPD. Many in the party hope for the nomination of either right-winger Friedrich Merz or Bavarian Markus Soeder as CDU/CSU chancellor candidate, instead of the rather Merkelian Armin Laschet. CDU/CSU owe much of their current success in the polls to Merkel’s pandemic management. If those numbers were to dwindle slightly next year, while the SPD manages to get just ahead of the Greens (and perhaps the center-right FDP does not cross the 5% hurdle), there could potentially be a narrow majority for an SPD-Greens government jointly with the post-communist Left. Olaf Scholz’s chancellor candidacy would be central for this experiment. A calm orator and an arch-pragmatist who recently negotiated the Franco-German recovery initiative for the chancellor, the current finance minister might represent continuity and a safe pair of hands beyond the Merkel years.

But any SPD hopes rest on CDU/CSU trying to emancipate themselves from Merkel’s legacy. That might become even harder now that the pandemic has increased the demand for pragmatically managing an economic crisis, keeping Europe together, strengthening public services, and designing a green recovery. And even if CDU/CSU were to veer away from Merkelism, the SPD would have to bridge its own internal tensions between a base demanding a leftist turn and yet another, much more centrist chancellor candidate. In the end, the true winners might still be the Greens.