Italy and South Korea are preparing emergency measures in light of the covid-19 outbreak. China is sticking to its growth target for the year. Germany’s main governing party is speeding up its search for a new leader. Malaysia’s prime minister has resigned. Campaigning for the constitutional reform referendum will begin in Chile. Meanwhile, the US president is visiting India, EU member states will agree a negotiation mandate for trade talks with the UK, Argentina’s president will avoid an encounter with his Brazilian counterpart, and South Africa’s finance minister will present the budget. 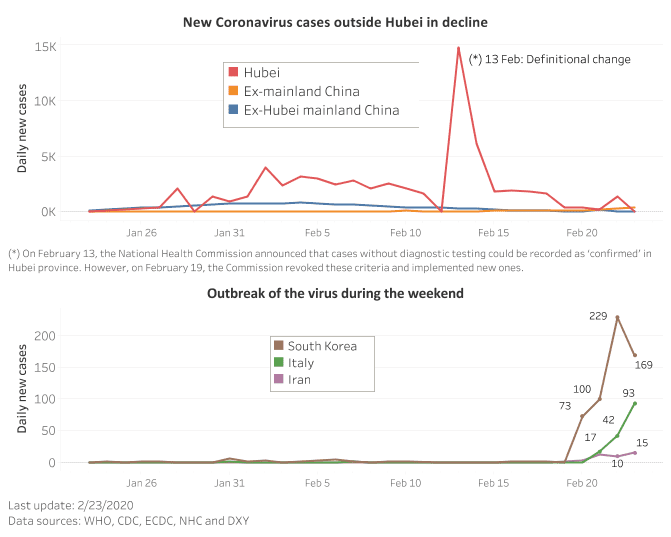 The coronavirus situation in Hubei remains critical, with 64,084 cases confirmed in the region (even if the number of daily new cases has stabilized). But outside the province, the Chinese government’s strict containment measures appear to be producing results. The pace of new infections in mainland China is slowing. The risks are shifting to Europe, however, after the worst covid-19 outbreak outside Asia in Italy over the weekend. The economic damage could be significant as the outbreak has occurred across the country’s economic heartlands of Lombardy, Veneto and Emilia-Romagna. Cases have also surged in South Korea and Iran.

In both Italy and South Korea, the governments are on high alert after the recent increase in the number of coronavirus cases. The Moon Jae-in administration could suspend flights, close schools, and otherwise curtail public activities. Moon has pledged an all-out effort to contain the outbreak over the next ten days, but the economic effects are already growing as business activity slows. Rome is expected to issue a decree shortly with emergency measures to support companies and families affected by the covid-19 outbreak in the country’s northern regions. The temporary suspension of local tax, utilities and mortgage payments are likely to be included in the decree. Small and medium size businesses in affected areas will be given preferential access to a state relief fund.

President Xi Jinping told top Communist Party leaders on 23 February that China should try to meet its full-year economic growth target, despite the coronavirus epidemic. Though not yet officially announced, the growth target was expected to be set at “around 6%” for 2020. If that target is adopted, authorities would have to resort to heavy stimulus in order to counteract the impact of the epidemic. But given a likely delay in convening the annual parliament session – where the growth target is announced and ratified – policymakers could still adjust the target downward. The National People’s Congress was scheduled to begin on 5 March but will likely be pushed back, though a delay has not yet been officially confirmed.

Chancellor Angela Merkel’s Christian Democrats (CDU) have decided to choose their next party leader at a special conference on 25 April. This follows the electoral defeat in the 23 February Hamburg elections. As a negotiated solution between the various contenders remains difficult to envisage, the signpost to watch might be the degree of coordination in the run-up to the gathering. If the open vote from the 2018 party conference is repeated, Merkel’s old rival Friedrich Merz has the best chances; if regional associations pre-coordinate to vote in blocs, this would improve the outlook for North Rhine-Westphalia’s state premier Armin Laschet. But the chancellor candidacy will still have to be agreed with the CDU’s Bavarian sister party; a quick departure from her top job in government is therefore unlikely to be in the cards for Merkel.

Prime Minister Mahathir Mohamad resigned today to avoid being entangled in the weekend attempt by rebellious factions in the government coalition to create a new majority that would deny Anwar Ibrahim the succession. He was reappointed interim prime minister but it could take much of the week for Malaysian politics to sort itself out, with three possibilities, all in play – a new majority led by the current opposition, the reconsolidation of the current majority, or new elections.

US President Donald Trump has begun his India visit today, 24 February, amid low expectations of concrete deliverables. A trade deal is already off the table with the unavoidable collision of Indian Prime Minister Narendra Modi’s “Make in India” and Trump’s “America First” objectives. But Modi hopes that the pomp and circumstance surrounding the trip – the only stand-alone visit by a US president in India’s history – will help him divert attention away from minority issues, citizenship controversies, and a flailing economy.

The Abe government will unveil a comprehensive basic policy for combating the novel coronavirus on 25 February.The number of new cases has continued to rise, and the US announced a new travel warning for Japan. The new policy will seek to prevent a rapid increase in new cases as seen in South Korea and other countries in recent days and could include new spending on research into the virus to facilitate the development of effective treatments and a vaccine.

Today, 24 February, Romanian parliament is scheduled to hold a vote of confidence for the new cabinet of prime minister designate Ludovic Orban (National Liberal Party). However, the procedure will likely be delayed as key opposition parties are expected to boycott the vote at least until the constitutional court clarifies whether President Klaus Iohannis could nominate the recently dismissed prime minister as the new government leader. With this move, the opposition parties are also seeking to block/delay the early parliamentary elections, which remain the most likely outcome of the current political crisis.

Slovakia will hold regular parliamentary elections on 29 February. While the ruling SMER-Social Democracy is expected to win most of the seats, its position in parliament will be weakened. The vote will likely result in a highly fragmented legislature with several potential coalition options, including a liberal pro-Western government or a populist cabinet with a strong nationalist sentiment. Any new coalition cabinet will include several parties and will be prone to instability.

EU member states are expected to agree their negotiation mandate for chief negotiator Michel Barnier by 25 February. However, the main conflict lines with the UK are already on display. In public comments, UK negotiator David Frost has re-iterated the UK’s rejection of EU demands for level playing field provisions – i.e., the UK signing up to basic EU rules, from state aid to tax, the environment and workers’ rights. But these are likely to feature prominently in the EU negotiation mandate, as well as insistence on an agreement on fishing rights. The risk of no-deal at the end of the year therefore remains very real.

Argentina’s President Alberto Fernandez has said he will attend the opening of the new legislative session on 1 March rather than the inauguration of Uruguay’s new president, Luis Lacalle Pou. Fernandez therefore avoids meeting Brazil’s Jair Bolsonaro. The two have an awkward relationship; Fernandez has made no effort to hide his sympathy for Brazil’s former president Luiz Inacio Lula da Silva, while Bolsonaro – who did not attend Fernandez’s inauguration last December – has been highly critical of past Peronist administrations. Whether or not Fernandez ends up meeting Bolsonaro this week, there is a long list of issues with the potential to effect bilateral relations, from trade and the future of Mercosur, to Bolivia’s political future and the ongoing political crisis in Venezuela.

Finance Minister Tito Mboweni will present the budget on 26 February at 2pm local time. Expectations are largely pessimistic in the context of feeble economic growth and ballooning public debt. Mboweni must back up President Cyril Ramaphosa’s State of the Nation Address (SONA) with fiscal measures while trying to avert the loss of South Africa’s final investment-grade credit rating from Moody’s, though a downgrade is largely considered a foregone conclusion. No real fiscal improvements are expected, especially in the short term. At best, the government will lay reform foundations, particularly for the huge public-sector wage bill and state-owned enterprises (SOEs).