Outside Hubei, the number of new coronavirus cases in China keeps declining. Talks between Argentina and its creditors continue on various levels. The leadership of Germany’s ruling party is still up for grabs. The US president will visit India. Meanwhile, protests could be ahead in Thailand, Croatia will have a new president, carnival will slow down legislation in Brazil, and Nigeria’s government will present a new petroleum industry bill. 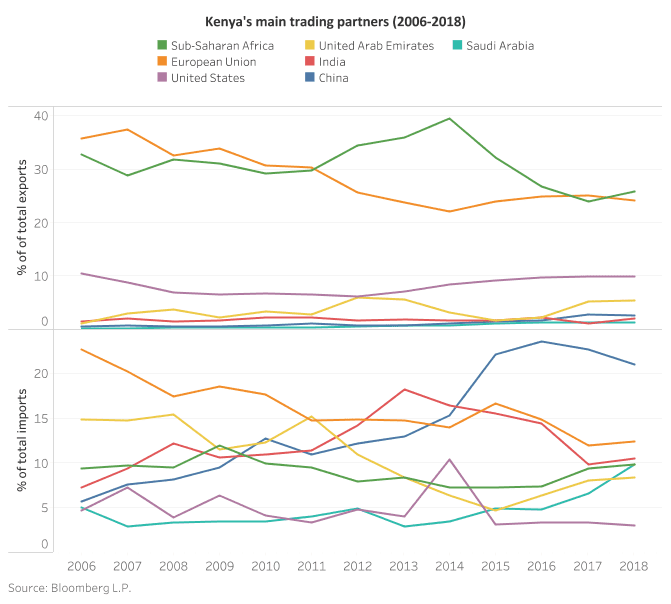 The US and Kenya recently announced that they would begin negotiations on a bilateral trade agreement. Kenya currently enjoys preferential access to the US market under the US Generalized System of Preferences (GSP) and is the number one apparel exporter to the US under the African Growth and Opportunity Act (AGOA). With AGOA set to terminate by 2025, Kenya hopes that an FTA with the US – the country’s third-biggest trading partner in 2019 – would serve as a model for future trade agreements with the region. As apparel exports from Kenya are increasingly being driven by Chinese companies, the envisaged agreement provides an important test case for the Trump administration’s Africa strategy. Aimed not least at countering China’s increasing influence, strengthening trade ties with Kenya – still the gateway to East Africa – would be an important building block in implementing the strategy released in December 2018.

New coronavirus cases outside Hubei province declined for 13 straight days through 17 February. Beijing appears increasingly confident that containment measures are working. But with much of the country still not working normally, there is still risk that new cases could spike as economy activity resumes at greater scale.

The International Monetary Fund (IMF) team currently in Buenos Aires wraps up their visit tomorrow, 19 February.They should leave with a clearer idea of whether the government’s modest – and still vague – fiscal targets are driven more by politics than by economic reality. The following day, 20 February, Finance Minister Martin Guzman will head to Riyadh for a meeting of G20 finance ministers and central bank governors, where he will hold another meeting with the IMF’s Kristalina Georgieva and with Paris Club creditors. Argentina faces a payment of almost USD 2bn to the Paris Club in May, which the government wants to restructure.

Amid continued uncertainty over the leadership of Chancellor Angela Merkel’s Christian Democratic Union (CDU), the 23 February regional elections in Hamburg will be watched. Polls suggest that Merkel’s coalition partner in Berlin, the Social Democrats (SPD), will be able to retain control of the city state. This should be positive for her government. But with an ex-environment minister once fired by Merkel now also running for the CDU leadership, this process might drag on for some time. Speculation about Merkel’s own future will hence continue. But divisions within her party could also complicate things for the next leader if he wanted to try and oust Merkel from the chancellery before September 2021.

US President Donald Trump will be in India on his first state visit on 24 and 25 February even as the centerpiece of the visit – an interim trade agreement between the two countries – has fallen through. With a US-brokered peace agreement to be rolled out in neighboring Afghanistan in March, India’s role in the region and Pakistan and China’s ambitions are expected to be discussed during the visit. Trump will also meet CEOs of Indian and US business during his visit.

The week-long Financial Action Task Force plenary, currently on in Paris, will decide Pakistan’s fate on 21 February.The question is whether to retain the country on the “grey list”; slide it into the “black list”; or to take it off the list altogether. Last week, an anti-terrorism court in Pakistan sentenced the mastermind of the 2008 Mumbai attack and founder of Lashkar e Taiba (LeT), Hafiz Saeed, to 11 years in two terror financing cases.

On 21 February, the Supreme Court will rule on whether the main opposition party Future Forward should be dissolved for allegedly violating a prohibition on receiving loans. A decision against the party could trigger protests.

Today, 18 February, Zoran Milanovic (supported by opposition Social Democratic Party, SDP) will be inaugurated as the country’s new president, replacing Kolinda Grabar-Kitarovic (backed by the ruling Christian Democratic Union, HDZ). While presidential powers are largely symbolic, Milanovic’s presidency will likely increase friction with the HDZ-led coalition government and strengthen the momentum behind opposition SDP ahead of the general parliamentary elections in late 2020.

This week the Financial Action Task Force is expected to decide whether to include Latvia into its list of monitored jurisdictions. The so-called grey list includes countries with strategic deficiencies in fighting money laundering and terrorist financing. Such a listing would represent a reputational hit for the country’s already troubled banking sector and signify that reforms in this area initiated by a five-party coalition government led by Krisjanis Kariņs (New Unity party) requires further progress.

This pre-Carnival week may see lesser activity in Congress but the need to vote on executive orders and presidential vetoes to unblock the agenda should ensure greater attendance than usual. The main item still refers to a December presidential veto against permitting the rapporteur of the Budget Guidelines Law (LDO) to define which projects would be eligible to receive BRL 30bn (USD 7.2bn) of the total BRL 42.6bn (USD 10.2bn) in government funds set out in parliamentary amendments in the draft. Considering individual parliamentarian and state bench earmarks that are already mandatory, if the veto is not overridden, Congress would be in charge of more than 60% of the overall budget, thus tying the hands of the government in directing spending even further. If an agreement is not reached today, 18 February, on the contours of a possible veto, the vote will be delayed until next week.

The government is expected to present a new version of the Petroleum Industry Bill (PIB) to parliament this week.According to Minister of State for Petroleum Timipre Sylva, the government expects the law to be passed by mid-2020. It remains to be seen though whether the government returns to addressing the hydrocarbon sector’s reform needs in one comprehensive piece of legislation. During President Muhammadu Buhari’s first term, the PIB – which has been in the works for the past 15 years – was split into several bills addressing regulatory, fiscal and governance aspects. However, Buhari had eventually vetoed the Petroleum Industry Governance Bill (PIGB), the only bill passed by the legislature. While the mid-year timeline seems ambitious, the new National Assembly has so far been under the firm control of the executive and passed far-reaching legislation at record speed.