China is trying to contain the coronavirus. The UK is finally exiting the EU. Meanwhile, Japan is preparing to evacuate its citizens from Hubei province, Slovenia’s prime minister has resigned, at least eight parties swill make up Peru’s new parliament, and South Africa’s cabinet will once again look into state-owned enterprises. 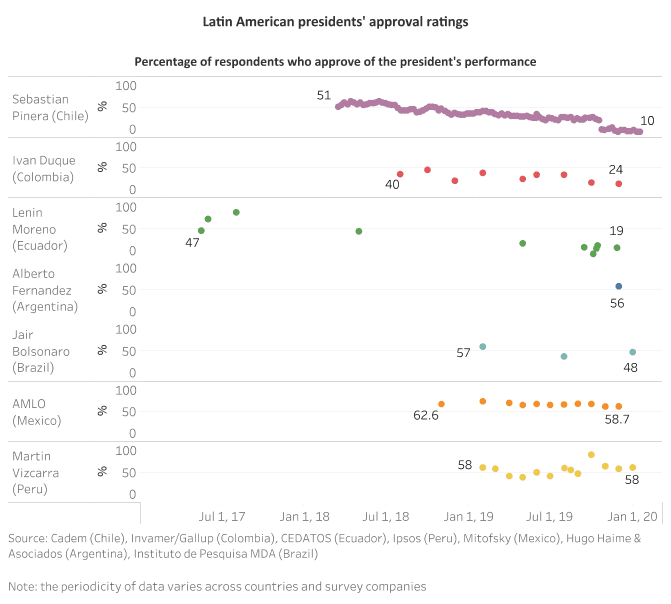 The fallout from recent protests across Latin America is clearly visible in presidential approval ratings for Sebastian Pinera (Chile), Lenin Moreno (Ecuador), and Ivan Duque (Colombia). In contrast, Brazil’s Jair Bolsonaro’s approval ratings have been creeping up, while Mexico’s Andres Manuel Lopez Obrador (AMLO) remains very popular. How long AMLO can remain buoyant will be a key test heading towards the 2021 mid-terms. Similarly, whether Martin Vizcarra (Peru) can keep his approval ratings at such highs (extraordinary by Peruvian standards) remains to be seen given there will be a new Congress in place for the remainder of his term. Finally, Alberto Fernandez (Argentina) starts on a high, as is normal, but amid economic constraints, the evolution of his ratings will be important to monitor.

The Politburo Standing Committee held a special meeting during Lunar New Year to discuss the coronavirus outbreak. A task force has been established, led by Premier Li Keqiang, to oversee crisis response. China’s health minister said that the virus has a relatively long incubation period of 14 days, during which carriers are contagious even if they show no symptoms. But he also said that most of the fatalities were suffered by patients who had pre-existing health conditions.

On 31 January, the UK will finally leave the EU. The country’s exit from the world’s largest single market, however, will be delayed until the end of the year, when the 11-months transition period is scheduled to end. In the meantime, both sides will have only a very tight timeframe to negotiate the so-called future relationship. This means that a limited deal, removing tariffs and quotas, remains the most likely outcome. Given this limited scope and the concessions the EU will insist on in return, the risk of no-deal by December remains very real.

As the Wuhan coronavirus outbreak continues to spread, the Japanese government is preparing its own charter flight this week. The goal is to evacuate hundreds of Japanese nationals from Wuhan and its surroundings, many of whom work for automotive companies that have built facilities in the region. The more significant question, however, is whether the outbreak will deal a blow to Japan’s economy by stalling Chinese tourism, as China in recent years became the largest source of inbound tourism to Japan.

The ruling coalition government led by Prime Minister Boyko Borisov (GERB) is expected to survive the vote of no-confidence scheduled on Wednesday, 29 January. However, last-minute negotiations in parliament could still tilt the vote to either side. The vote was initiated by the opposition Socialist Party on 20 January, over the mismanagement of the country’s environmental policies.

This week opposition Social Democratic Party (PSD) is expected to initiate a no-confidence motion for a minority government led by Ludovic Orban (National Liberal Party, PNL) over amendments to municipal election laws. The no-confidence vote, which should take place in the first part of February, has good chances of passing. The fall of Orban’s government would trigger complex constitutional procedures for the dissolution of parliament and snap general elections in late spring or early summer.

Following the sudden resignation of Prime Minister Marjan Sarec (List of Marjan Sarec) on 27 January, President Borut Pahor (independent) will start negotiations with parliamentary groups. The goal is to propose a new cabinet leader, who will mostly likely from opposition Slovenian Democratic Party. Should the proposed candidate fail to secure support from an absolute majority of deputies (at least 46 out of 90), dissolution of parliament and snap general polls in early spring would follow.

Quick count results from the congressional elections held yesterday, 26 January, suggest there will be at least eight parties in the new legislature. Based on these results – which are not final – the biggest blocs in Congress will be the center-right Popular Action (AP), the Alliance for Progress (APP), the Union for Peru (UPP), and the Agricultural People’s Front of Peru (Frepap). The latter – which appears to be the biggest surprise of these elections – is an evangelical party. The UPP is allied to the jailed insurrectionist and extreme nationalist Antauro Humala. The once-dominant Fuerza Popular (FP) looks to have won around a dozen seats in the 130-seat Congress. A fuller picture of results should be forthcoming later this week. The new Congress will probably be inaugurated in March.

Cabinet will convene this week. Once again, state-owned enterprises will be a burning issue. The cabinet may reaffirm an ANC commitment that South African Airways (SAA) be restructured but retained as a state enterprise, though it is unclear whether the airline’s collapse can be avoided. In relation to power utility Eskom, cabinet may endorse plans to address power shortages by easing regulatory restrictions on self-generation, allowing municipalities to procure energy, and enabling independent power producers. The cabinet decisions will set the scene for the State of the Nation Address on 13 February, when President Cyril Ramaphosa faces an uphill struggle to boost sentiment amid sluggish growth, debt dilemmas, record unemployment and crippling energy restrictions.