Russia’s new cabinet will be unveiled. Two regions in Italy will hold crucial regional polls. Argentina’s finance minister has ruled out a bailout for Buenos Aires province. The annual gathering of South Africa’s ruling party has come to an end. Poland is moving ahead with its controversial judicial reform. Meanwhile, India’s opposition is mobilizing against the new citizenship law, Bulgaria’s government is facing a no-confidence vote, protests will recommence in Colombia, and plans for constitutional reform in Cote d’Ivoire might become clearer. 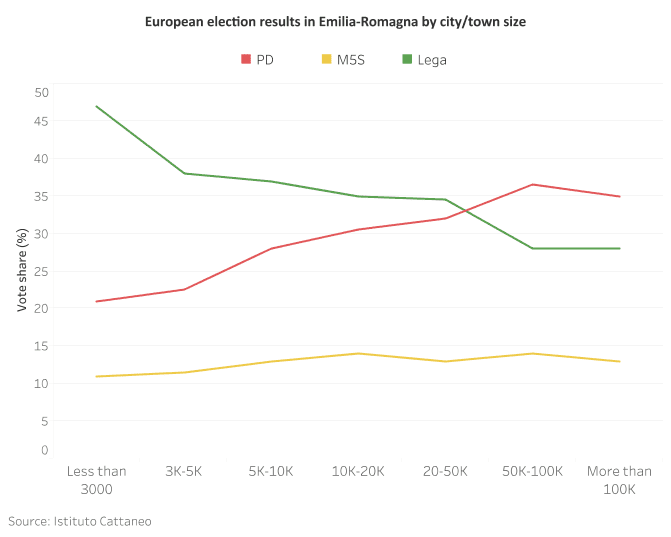 Emilia-Romagna, one of Italy’s richest regions, goes to the polls on Sunday. The region has traditionally been a stronghold of the center-left; however, patterns of voting behavior have evolved over the past years. The last two nationwide elections showed that the region has been gradually shifting towards the center-right, emboldened by the popularity of Matteo Salvini’s Lega. As shown in the graph above for the case of the 2019 European elections, this phenomenon has not been homogenous across the whole region. The Lega has been particularly successful in rural areas and smaller towns, whereas the center-left is still the leading political force in cities with more than 50k inhabitants.

Newly appointed Prime Minister Mikhail Mishustin will propose the composition of his cabinet by the end of this week. This will indicate priorities and policy changes envisioned by the new government. Mishustin’s cabinet will likely focus on reviving economic growth and addressing the most pressing household needs in the period leading to the 2021 general elections, while strategic shifts in Russia’s foreign policy are unlikely.

Holders of a USD 750mn ten-year Buenos Aires provincial bond have until 22 January to agree to a provincial government proposal to defer a principal payment due on 26 January until 1 May. If 75% of bondholders agree, the delay in making payment will go ahead (albeit with questions over how the province intends to fulfil its payment obligation in May). A default would be declared if the principal payment does not materialize ten days after the 26 January deadline. Finance Minister Martin Guzman has ruled out a bailout for the province. However, Guzman will also want to avoid complicating the far larger debt restructuring talks that he is about to embark on, while preventing a deterioration in macroeconomic variables that a sub-sovereign default would likely set off.

On 23 January, parliament’s lower house will likely override the upper chamber’s veto on the controversial bill on disciplinary measures for judges challenging the government’s judiciary reforms.The adoption of the legislation – which faces harsh criticism from opposition and the international community – will further weaken the independence of the judiciary in the country and deepen Poland’s conflict with the EU.

The National Health Commission has confirmed that a respiratory virus originally traced to a seafood can be spread between humans. This comes just as much of the country prepares to travel by trains, planes, and automobiles for the annual Lunar New Year Holiday that begins on 25 January. The new strain of coronavirus was originally traced to a wild seafood market in Wuhan, capital of central China’s Hubei province, but new cases have been identified in recent days among people who lived far from the city. As of 21 January, the commission had identified 291 cases nationwide, of which 270 were in Hubei. Six patients have died.

On 22 January, the Supreme Court will take up nearly 60 petitions challenging the Citizenship Amendment Act, passed by parliament but bitterly opposed by the opposition. The changed law allows religious minorities (mostly Hindu) from Afghanistan, Bangladesh and Pakistan to be granted Indian citizenship. The petitioners argue that grant of citizenship on the basis of religion violates the Indian constitution. Muslims and Hindus alike are opposing the change in law, while home minister Amit Shah has ruled out any negotiation on it.

The ruling coalition government led by Prime Minister Boyko Borisov (GERB) is expected to survive the motion of no-confidence at the end this week or early next week. However, last-minute negotiations in parliament could still tilt the vote to either side. The motion was initiated by the opposition Socialist Party on 20 January, over the mismanagement of the country’s environmental policies. Failure of the motion to pass would increase the near-term stability of the government as the opposition would be barred from initiating another vote of no-confidence for a period of six months.

Protests over perceived government policy shortcomings will recommence today, 21 January, two months after the November general strike that set off multiple demonstrations and serious unrest last year. Continuing violence and threats of violence against social activists and prominent political leaders are likely to provide the protests with fresh impetus, as will the passage in December of the controversial tax reform and the government’s recent positioning in favor of two highly controversial issues: fracking and the use of the herbicide glyphosate to eradicate coca, the raw material for cocaine.

President Alassane Ouattara might give some pointers regarding an upcoming constitutional reform during a speech at Chatham House in London on 21 January. Ouattara had announced to prepare amendments to the constitution earlier this month but remained silent on the content of the planned reform, giving rise to speculation as to whether Ouattara plans to abolish a two-term limit ahead of the presidential election scheduled for October. Ouattara, who was first elected in 2010, is currently serving his second term as president but openly toys with the idea to present himself again this year. Yet his claim to be eligible for a third term appears to be based on a rather weak legal argument – the idea that the new constitution, introduced in 2016, would somehow turn back the clock on the two-term limit already enshrined in the previous constitution.