Argentina Economy: The Week at a Glance

The Super Cepo outshined the Budget

In another country this weekly editorial would inevitably be about the Budget. The Bill was presented last week. It has a realistic activity expectation, a too-high deficit, and a stubbornly low inflation that underestimates revenues. This in turn gives us some hope that the deficit might be lower as more realistic inflation dilutes some expenditures. The Budget also has implicit increases in utilities, which makes it even less likely for inflation to close the year at the 29%-mark set.

However, the Central bank drew all the attention by giving a new twist to the Cepo. The measures are already public knowledge and, without going into detail, they imply a virtual halt on ability to buy dollars for saving purposes, a liquidity drain on the blue chip swap market, and forced debt restructuring for companies with capital maturities in dollars until March 2021.

The only positive aspect is that we suppose that for a time the drain on net reserves will stop or at least diminish. This in turn might unclog the imports pipeline. The stock shortages for some industries are more than just an anecdote and it is starting to become harder to continue to recover even beyond the events of the pandemic. Since the cepo was established back in September 2019, foreign assets purchases amounted to nearly USD 9 billion, and companies have paid back net loans for USD 8.9 billion. Since March, the outflow of funds for these two items has totaled USD 4.5 billion. On the current account side, net exports of goods and services settled in the FX market were USD 13 billion since September and USD 4 billion since March.

The new XL cepo will not be costless. Firstly, it is a death blow to one of the alleged benefits of sovereign default: the possibility of the private sector obtaining financing. This is a hard blow to the energy sector, among others, which has to invest heavily to prevent Argentina from becoming a gas importer again. Nobody wants to enter a place where there is no way out. The CB is counting on grain companies getting financing from their headquarters, but it sounds more like willfulness than an economic policy.

Secondly, the fall in middle class confidence could cause a dollar deposits outflow. The liquidity of the banking system is not a problem, but we will surely see gross reserves drop due to a fall in reserve requirements. Out of the USD 17 billion in private deposits, scarcely 6 billion are loaned out.

Thirdly, there will be loss of revenues. The PAIS tax is reduced to a small expression and the withholdings on account of profits will have to be returned. And more, 60% of that money belongs to the provinces anyway.

Fourthly, by shifting more operations to the informal market, there are two risks. On the one hand, a price pressure that whether we like it or not is a reference for some economic agents. The other risk is that it increases the use of cash, increasing the informality of the economy.

Will it work? The key will be to get the spread down to 40% so that the CB will not lose reserves, thus being able to buy some of the trade surplus on the margin with the financial account locked with a padlock. The initial market response was very eloquent. Bonds trading at 14% rates, the prices of shares at a 3-month low. While soybean prices have been on the rise, the flow is still many months away from achieving growth. This XL cepo does not seem to be a substitute for higher interest rates or faster depreciation to solve the currency conundrum.

Central Bank Tightened the Cepo and the Market Took Its Toll

– On September 15, the Central Bank announced a set of measures to stop the drainage of net reserves, which had exceeded USD 1 billion in the first half of the month

– Among the measures affecting individuals, we highlight a 35% income tax withholding on dollar purchases, this increased the price to 132 pesos per dollar, and that credit card transactions abroad were included in the USD 200 monthly quota

– Companies with maturities in dollars that surpass USD 1 million a month must refinance their liabilities for 60% of their maturities since the CB will only open the official market for the remaining 40%. Foreigners will not be able to make blue chip swap operations.

– The market’s reaction was negative. The sovereign bonds are already operating with yields over 14%, the yield curve reversed, and the Merval fell 9.6% since Tuesday

The CB´s reserve sales were doubling every month: the loss climbed from USD 568 million in July to USD 1.2 billion in August. Before the latest announcements, the entity had already sold USD 1,0 billion in the first half of September, at a daily rate of almost USD 100 million. Behind the bleeding was the wide spread between the official and the parallel dollar, that was accelerated by the purchase of the USD 200 monthly quota, the currency demand for corporate debt payment, and the import payments made in advance. In the previous weeks, the government had been reluctant to impose new restrictions, and days before the announcement Minister Guzmán had ratified the continuity of the quota for individuals. 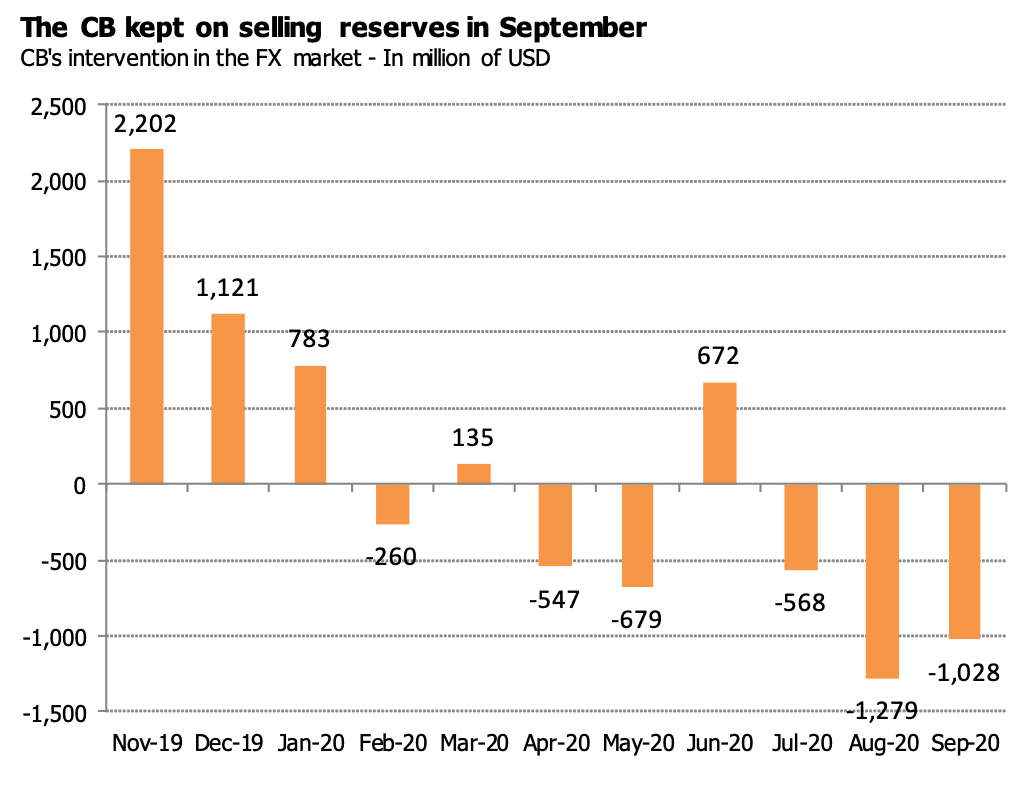 With inflation flaming up, the government avoided a faster depreciation and showed no intention of moving toward a complete exchange split. Officials finally opted to give restrictions another twist. The restrictions announced on September 15 aim at cutting down demand from individuals and companies, although at a high cost for the Government’s credibility and popularity and negatively affecting Argentinian assets.

The 35% withholding towards income tax moves the dollar to 130 pesos, by adding to the 30% of the “P.A.I.S. tax” and aligning it with the MEP and blue-chip swap rates. Additionally, the transactions abroad with debit/credit cards will be considered within the USD 200 monthly limit, which will further limit the purchase of already expensive dollars.

Companies were forced to restructure over half of their liabilities in dollars, after the CB announced that the private sector will only be granted access to the FX market for up to 40% of their capital maturities between October 15 and the end of 2020. The rest will have to be refinanced in a no less than 2-year term. In a context in which the country risk rate remains high even after the sovereign debt restructuring, making financing more expensive, the measure could push many companies into default. According to the president of the CB, 3.3 billion dollars will mature as of March. 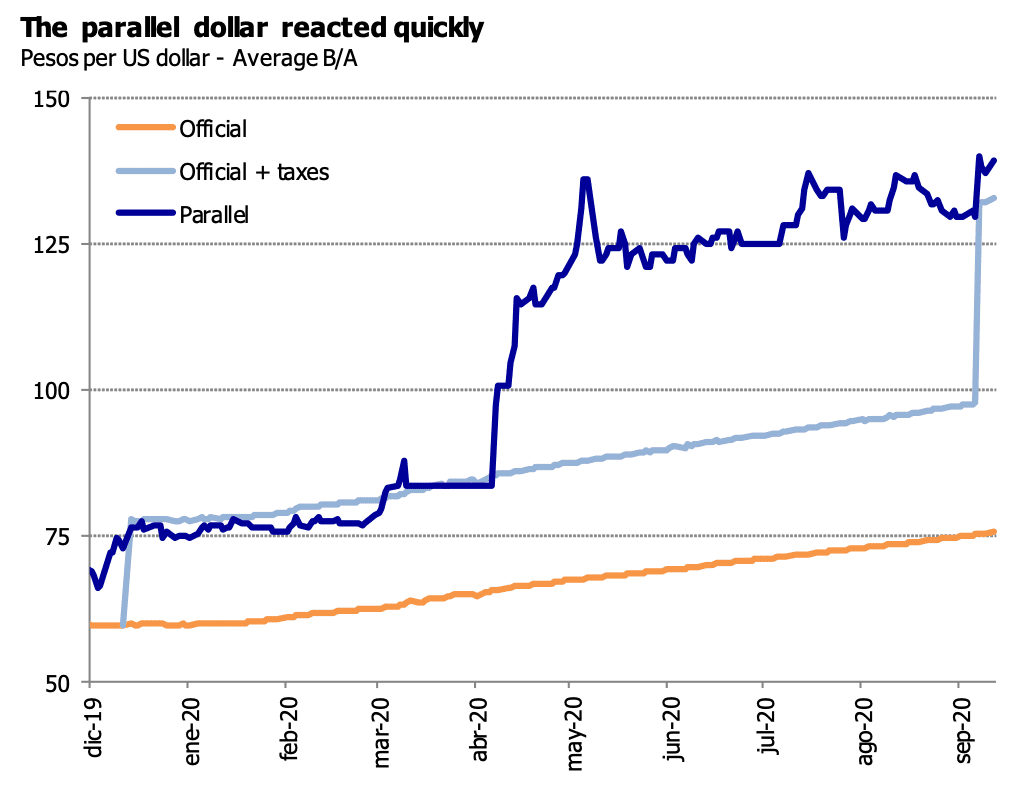 Another CB measure was to curb blue chip swap’s liquidity. On the one hand, it banned operations for foreigners. On the other, it imposed a 3-week parking for Argentinians wanting to purchase dollars through this channel. It also eliminated the parking to sell dollars, an unfathomable measure.

The Market´s reception of the new restrictions was very negative. The parallel exchange rate leaped to 140, causing an 86% spread with the official rate and again marking a difference with the dollar that encourages buying for savings purposes. Over the following days, the new bonds experienced 13% drops, while the country risk which had made its debut at 1,100 points moved to 1,348 basis points, a 22% increase in just a few days. Argentinian stock was also hard hit, with the Merval dropping 9.6% in less than a week. What is most concerning is that, although they have slowed down, reserves sales have not stopped after the announcements. The drainage of dollar deposits also impacts on the CB´s gross reserves. Thus, without a short-term change in expectations, new measures to correct exchange rate imbalances will be needed. Experience shows that with a high spread it is very hard for the CB not to sell dollars. 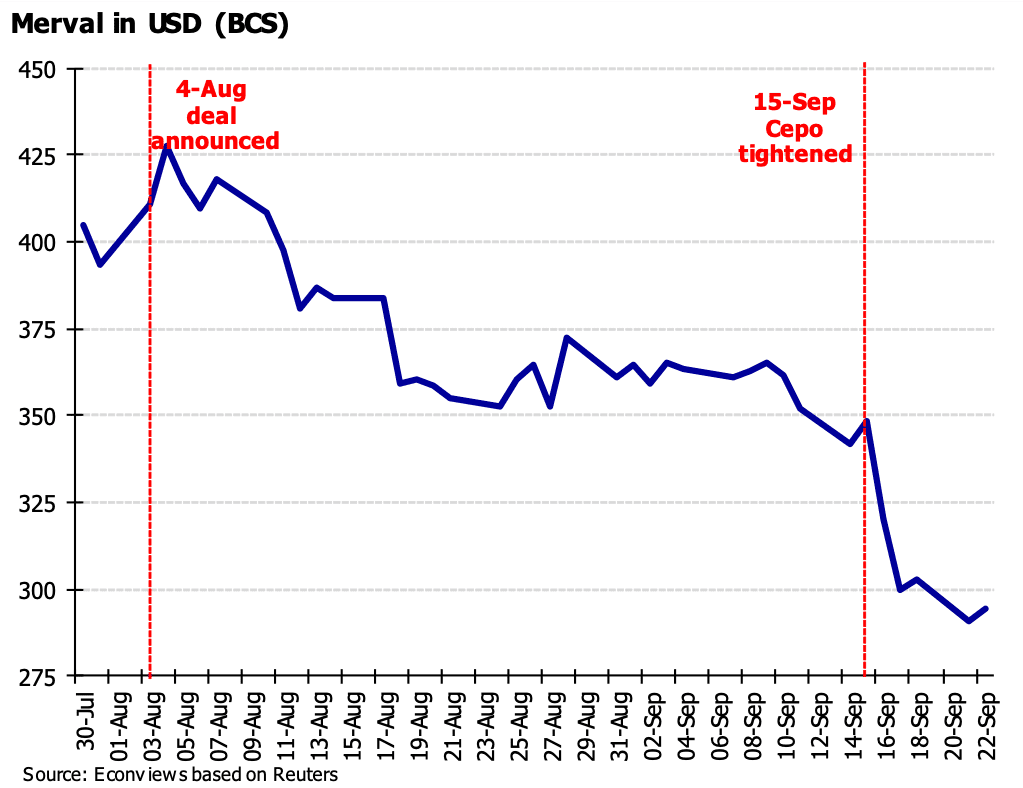 Finally, the peso market was calm. The rates did not alter their previous values. Over the last 30 days, loans in pesos grew 3.4% slightly over inflation while deposits did so 2.8%. As in previous weeks, sight deposits fell and time deposits grew, a signal that the monetary hangover measured by M2 has stopped growing.

August’s Inflation Climbed to 2.7% Due to Increases in Food

– In its year-on-year measurement, national inflation moderated to 40.7%, while so far this year the accumulated inflation has risen to 18.9%.

During the last week of July, prices had started to accelerate, pointing out that August figures would be somewhat higher than in previous months. Indeed, INDEC’s nationwide consumer price index accelerated from 1.9% in July to 2.7% in August, its highest value since March. In addition to the positive carryover from July, the reopening and partial reactivation of demand in several sectors also pushed the overall indicator. From the exchange front, the depreciation rate of the official exchange rate, which remained at 2.6% m/m, and the hardships experienced by importing companies trying to access the FX market (which increases the importance of the parallel exchange rate as a reference price and increases restocking costs) added some extra pressure to the month’s inflation. 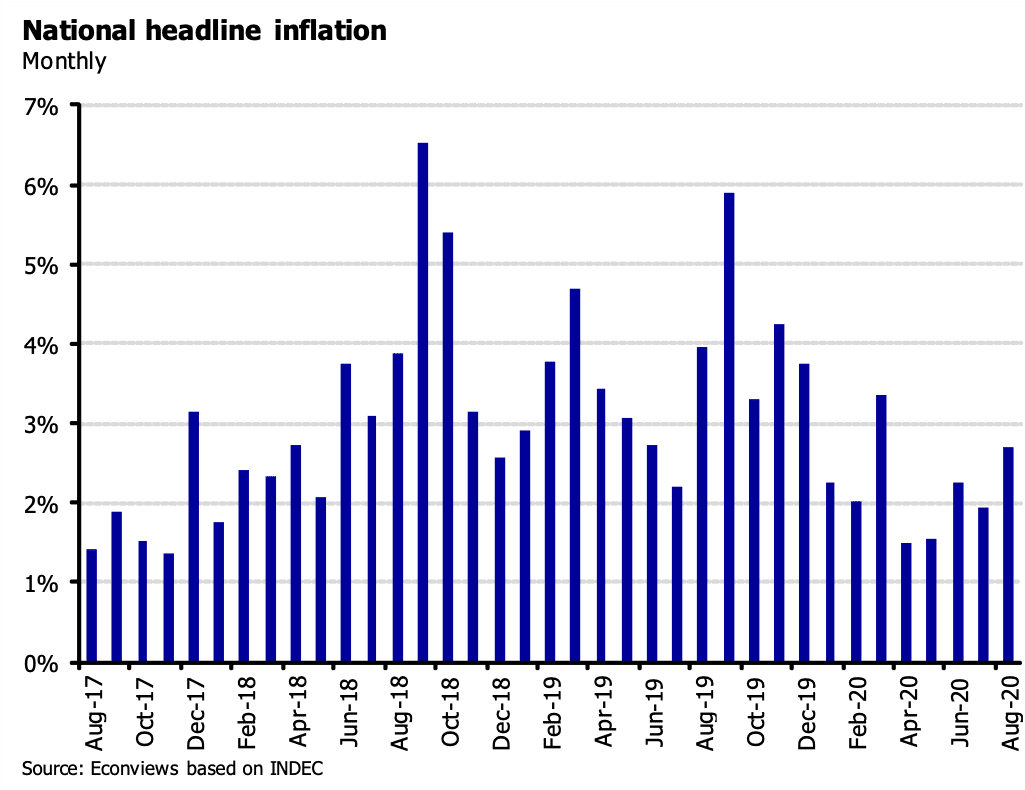 Core inflation accelerated from 2.5% to 3.0%, with “food and beverages” recording a 3.5% increase, against 1.3% in the previous month, being the item that most affected the general indicator. This item also drove inflation in seasonal products, which was 4.0% (vs. 0.9% in July) mainly due to increases in fruits, vegetables, and legumes. Regulated prices continued to be limited by the tariff freeze in utilities and public transportation rates and recorded a scarcely 1.0% rise (0.5% the previous month).

Together with “food and beverages”, the item “Home equipment and maintenance” also recorded a 3.5% monthly increase, although its effect on the general indicator was much lower (0.96 pp. vs. 0.23 pp.). The lowest increases took place in Communications (0.3%) and Education (0.8%). In this scenario, inflation in goods (3.3%) was again over that of services (1.5%). 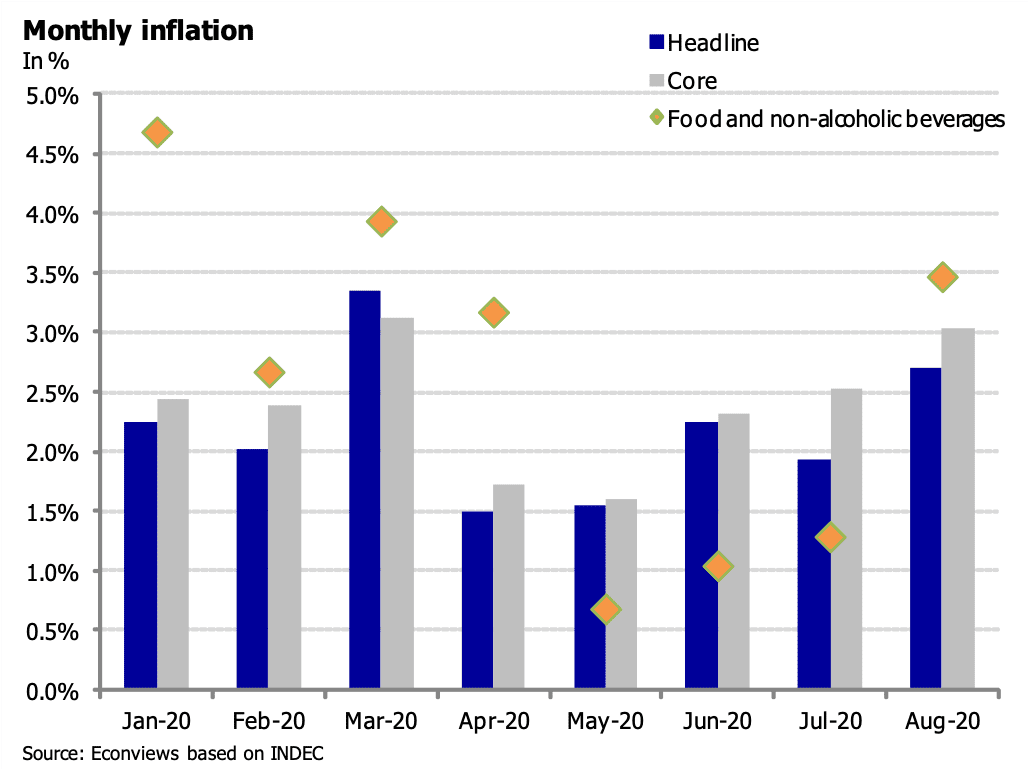 Although demand is still down and it is only partially endorsing the reactivation of supply, the incentive to consumption via financing in installments and the delayed 2020 collective salary negotiations that have started to close, (the Union of Workers in Commerce, the biggest collective group, closed negotiations last week) are a significant risk for the following months’ records. 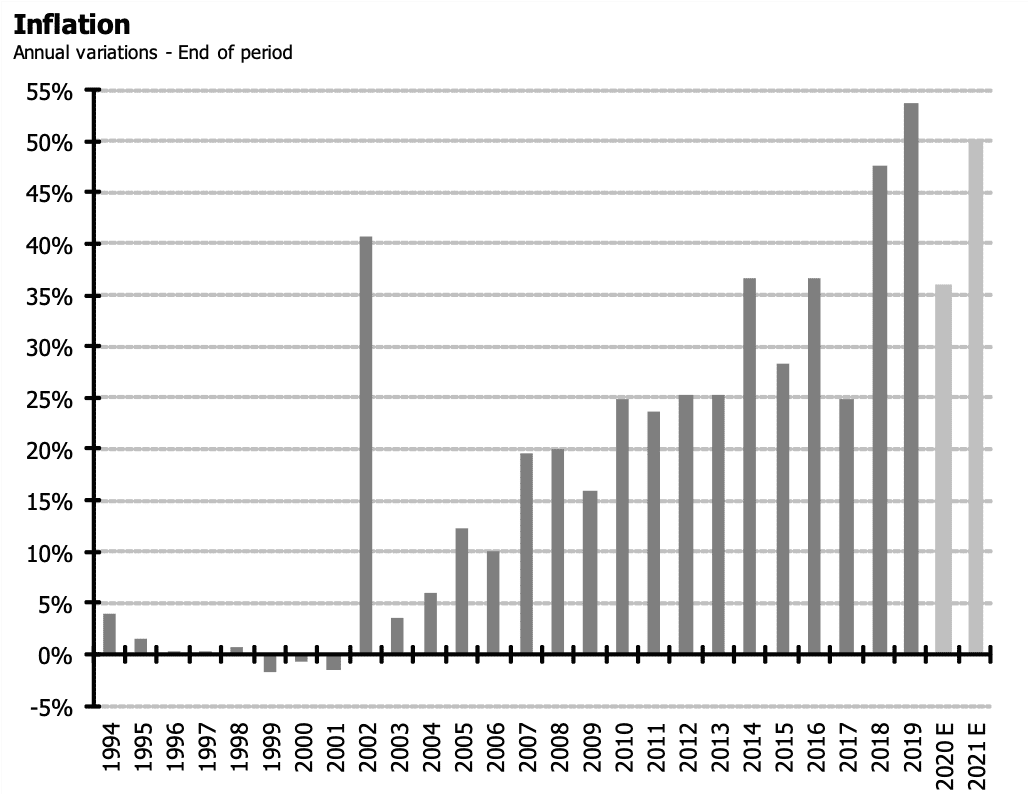 In the coming months, we will have to monitor what happens with the official exchange rate and the exchange rate spread after tightening restrictions, and especially if there are greater limitations for importers. It will also be essential to see whether the Central Bank decides to sterilize or maintain in circulation the money it is printing to finance the fiscal deficit. After the first half of the year, where inflation was 13.6%, we expect it to accelerate to 19.7% in the second half, closing the year at 36%. This means a 3.4% average between September and December.

Argentina: Leliqs Are Out, Bonds Are in, a Substitution with Impact

Argentina: The Paris Club and the Fund – Parallel Lives

Special Analysis on Recent IMF Programs and What They Imply Argentina

Argentina: From Gloom to Doom