ARGENTINA: The Week at a Glance

No Magic without Credibility for Argentine Bonds

The debt restructuring has become a reality. Argentina will have almost no financial pressure for the next 5 years, well into the following administration. The deal with the IMF is still pending, but nobody really believes Argentina plans on defaulting to the Fund, at most reaching the new arrangement will take time and effort. Could it be the anchor to regain the badly needed confidence?

Debt maturities free, Argentina is still struggling to generate credibility. Its bonds are currently trading at yields above 12%. Credit agencies such as S&P and Fitch Ratings ranked Argentina in the “C” category, with a CCC+ grade for the former and a CCC one for the latter. This contrasts with Ecuador, which was assigned a B- grade by both agencies and whose bonds yield slightly under 10%. Ecuador quickly closed an Extended Fund Facility program with the IMF, which even allows for higher fiscal deficits in the upcoming years. Argentine debt today yields higher than Angola, only beating Belize among countries no longer in default, and in line with countries such as Mozambique or Gabon.

There are several potential answers for the investing community’s cold welcome to the new Argentine bonds. A technical bunch of reasons: big asset managers already held a large position and it is unclear who the marginal buyers are today. Secondly, although the yields are attractive, Argentine bonds have a very low coupon and require capital appreciation to materialize those yields in the short term. Thirdly, the threat of intervention from the Central Bank, with a 13 billion firepower in nominal value hardly convinces investors to buy into Argentina.

From a macroeconomic view, the idea that Argentina will not reach a fiscal balance in this presidential period is gaining traction. The market was expecting a more austerity-driven budget than the one Minister Guzmán will present today in Congress. The market was expecting that a recovery in tax revenues coupled with a cut in expenditures related to the pandemic led to better fiscal numbers. The exchange weakness, with the CB selling dollars every day, does not help to create an idea of intertemporal sustainability.

The political situation is far from adding credibility or calm. Polarization deepens, with the unilateral transfer of resources from the City of Buenos Aires to the Province being the latest chapter in a saga where the investment climate continually worsens. There is scarce agreement between the government and opposition on how to exit the lockdowns and reach a new normality. The suggestion that Cristina Kirchner holds the final word on key decisions does not lure investment committees to advance positions. ADRs are also bleeding, even on days when Wall Street is on risk on mode. Since the deal with bondholders, the capitalization of ADR certified stocks (excluding Mercado Libre) has fallen by around 10%.

After the Debt Restructuring, Country Risk Fell to 1,100 bps

– The curve for hard dollar bonds was relatively flat, with average yields between 12% and 13% for both local and foreign law bonds

– The Global EMBI Argentina Index changed its composition, adding the new bonds under foreign law; it started out at 1,100 bps, 150 above Ecuador, which closed its own debt restructuring process recently

– Argentina has margin to compress yields, and the negotiations with the IMF should be of help

Yesterday, the new sovereign bonds in foreign currency had their debut in the local market’s dollar operations, having completed the 5 days of parking. Thus, due to a higher volume of trades, it was possible to estimate better references for the implicit exchange rates. The Blue- Chip Swap traded around 130 pesos on the dollar, while the MEP variant was closer to 123 pesos, implying a spread with the official exchange rate of 74% and 64% respectively. The official exchange rate kept depreciating at its normal daily pace of 0.09% (0.3% on Mondays), and closed at ARS 75.12 on the dollar. 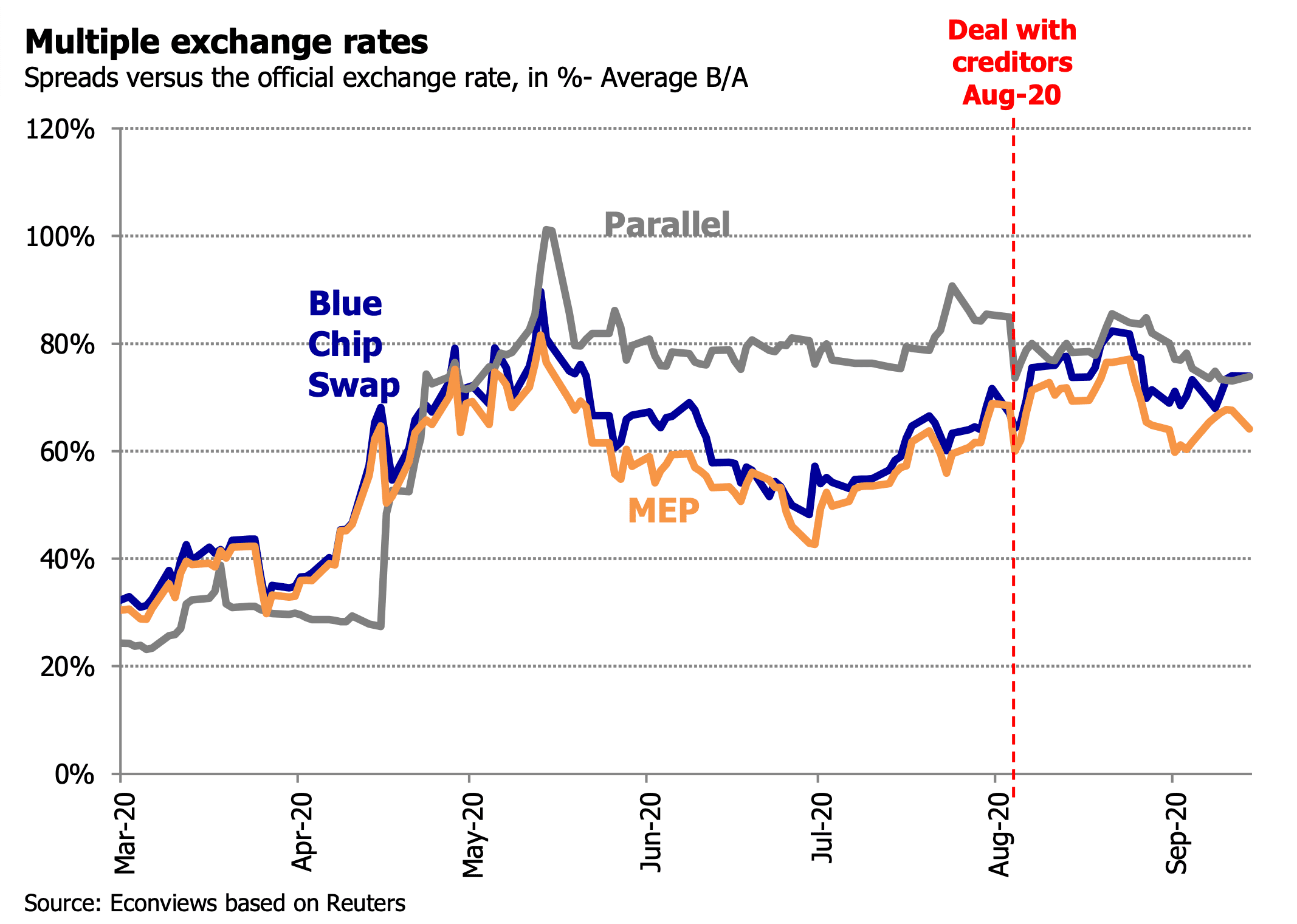 On September 10th the Global EMBI Argentina index crafted by JPMorgan changed its bond composition, taking the new instruments under foreign law as a reference. Therefore, respecting the higher liquidity in 2030 and 2035 bonds, on its debut the new index fell from 2,150 to 1,100 bps. Yesterday, the more liquid market left a bitter taste, and the index rose slightly to 1,122 bps, with bonds averaging somewhat higher yields around 12%-13% for both legislations.

Argentina’s country risk is higher than Ecuador’s, which also recently restructured its debt under foreign law and has already closed an Extended Fund Facility arrangement with the IMF. On September 10th, when JPMorgan also changed the EMBI index’s composition for Ecuador, its country risk fell to 950 bps, 150 bps below Argentina. 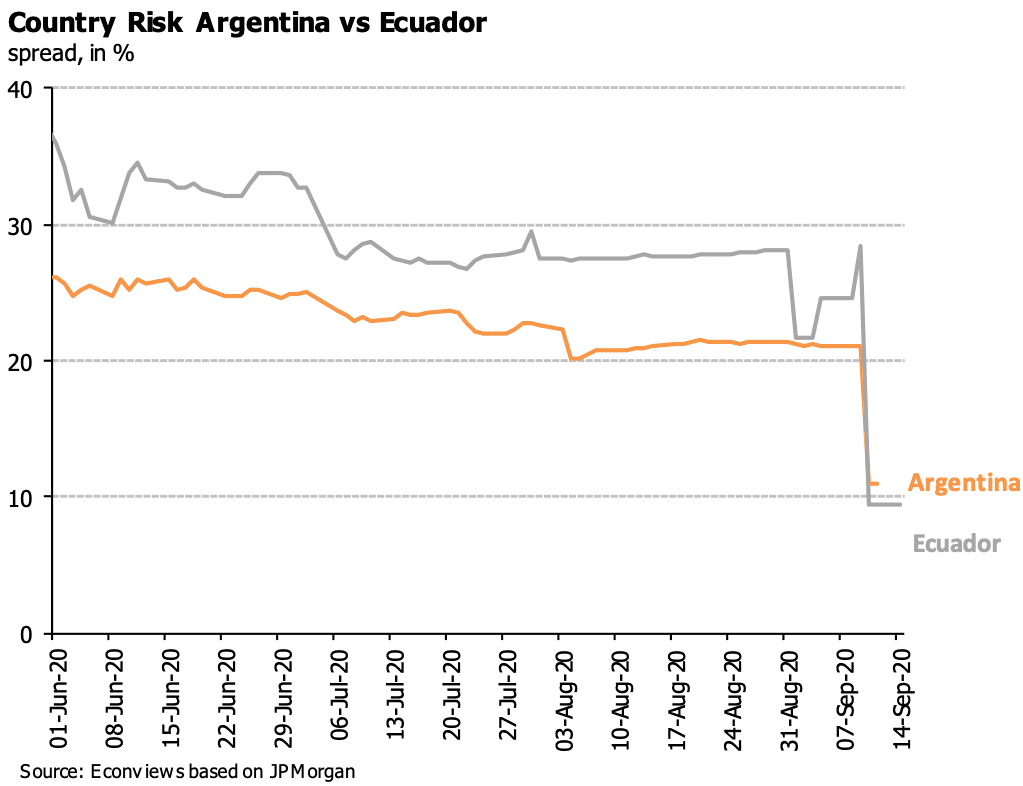 Credit agencies S&P and Fitch Ratings assigned Argentina’s debt CCC+ and CCC grades, respectively, while both agreed on a B- rating for Ecuador. In the first case, Argentine debt stood one grade below Ecuador’s, while Fitch considers the countries are two levels apart.

Argentina has margin to compress yields, and the talks with the IMF should help this goal. Clear signals towards fiscal consolidation and a lesser financing of the primary deficit by the Central Bank in 2021 are potential drivers for improving the sovereign debt’s performance.

– The Budget bill will be presented today in the Lower House with the following macro assumptions: GDP growth of 5.5%, inflation of 28% and an exchange rate of ARS 101 at the end of 2021

– The primary deficit would reach 4.5% of GDP (vs. 3.5% according to our estimates) casting doubts about financial sources and its monetary dimension

Today the government will submit the 2021 Budget bill to the Lower House, as the constitution requires. After a 12.2% drop in GDP estimated for this year, the budget foresees that the economy will pick up 5.5% next year. Inflation would decelerate from 32% in December this year to 28% in December 2021. The exchange rate that will rise 24%, reaching ARS 101 per dollar towards the end of the year and a primary deficit of 4.5% of GDP. 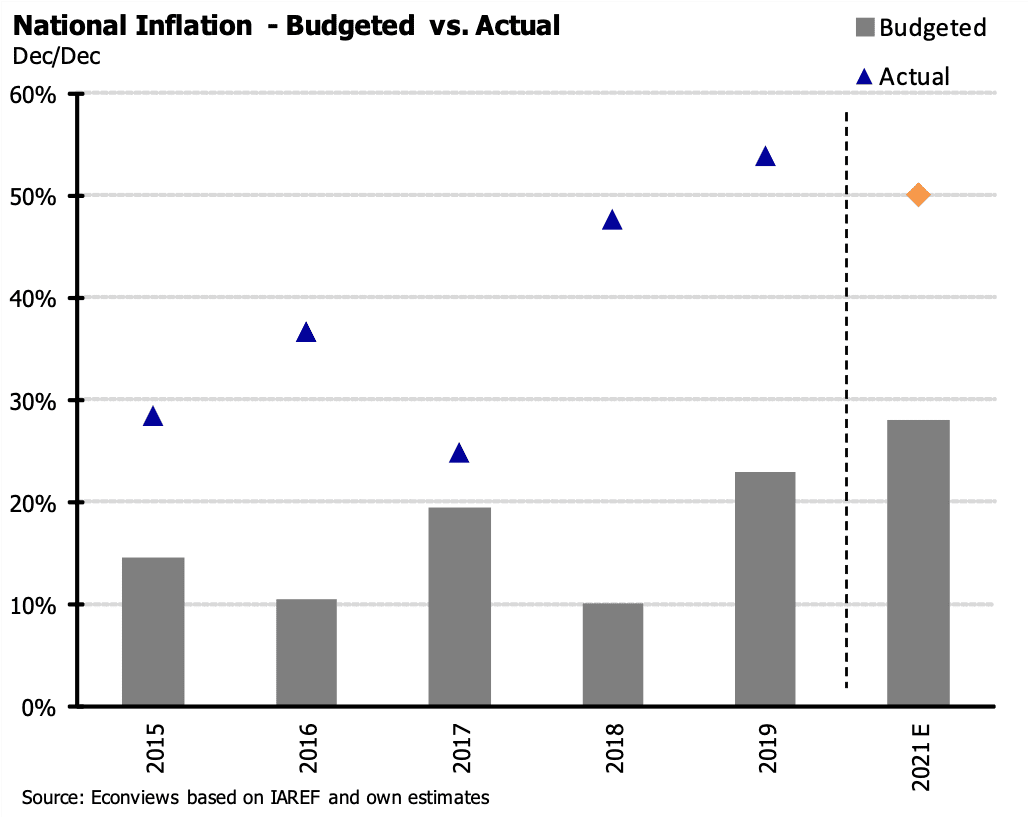 Most of the projections presented by the ruling party are far from our estimates. From EconViews we expect inflation close to 50% in December of next year, almost double that forecast in the budget, while the exchange rate would rise 41%, closing 2021 at 126 pesos per dollar. Regarding the fiscal accounts, we foresee a primary deficit of around 3.5% of GDP, one point below that estimated in the budget. Although there are also differences with respect to the growth of real GDP, for this year we estimate a smaller drop than the official one (11.6% vs. 12.2%), and therefore the trajectory of the level of activity is quite similar.

The underestimation of key variables, such as inflation and the exchange rate, has taken away the credibility of the budget in recent years by allowing “windfall” revenues to be allocated discretionally. During the last 15 years, the actual spend was above the budgeted figures. On the revenues side, the same thing happened, except in 2017. By underestimating inflation, revenues are underestimated as well, and that generates two things: on the one hand, it gives the executive branch more discretion to direct spending; secondly, that can be useful to keep politicians’ request for funds at bay. The logic is that when different interest groups realize there are more resources, they will have little time to spend them. This opens the possibility that the deficit is somewhat smaller. 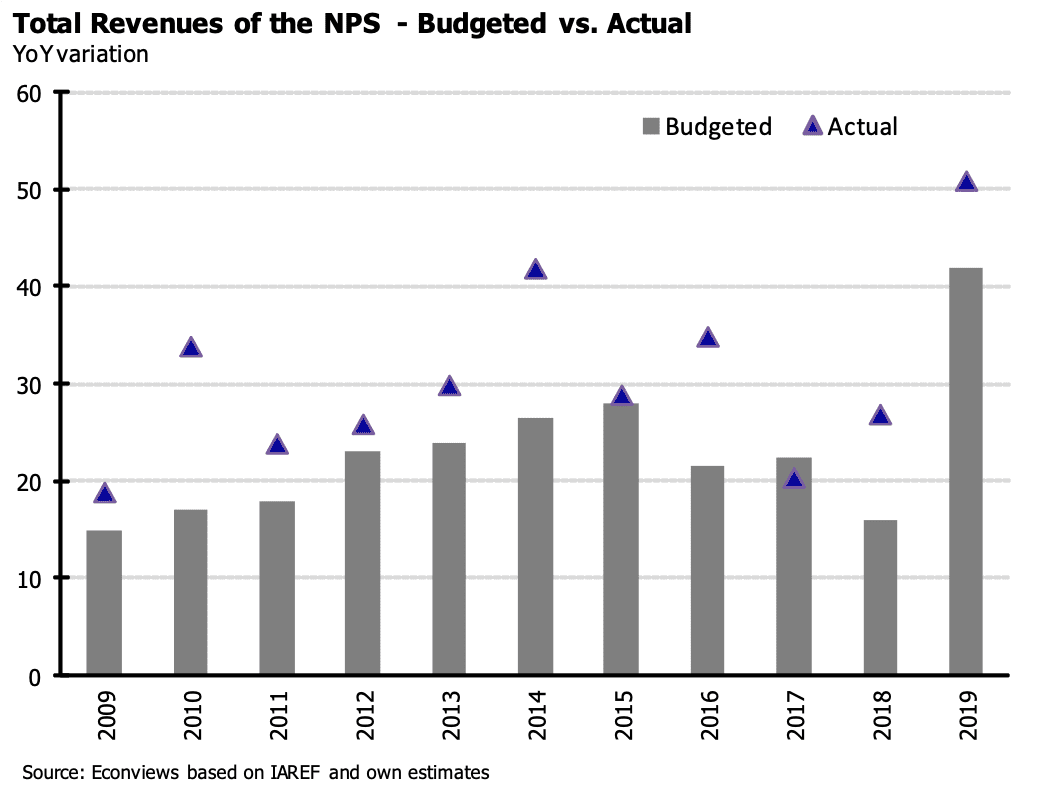 For 2021, the Budget Project foresees a primary deficit of 4.5% of GDP, even with limited access to external credit pending an agreement with the IMF and the rebuilding of confidence. With inflation slowing down to 28% and limiting financing via inflation tax, seigniorage via real balances will have to do most of the work, which would generate serious problems of monetary consistency. Under this reasoning, we estimate a primary deficit one point lower than the budget, part financed by new debt in pesos and the rest via seigniorage with an average inflation of 43% (50% end of period).

Unfortunately, in recent years the budget has rarely been able to fulfill its fundamental function, which is to generate predictability through the contribution of a consistent economic and fiscal framework. And in this scenario, it is very difficult for 2021 to be the exception.

Argentina: From Gloom to Doom

Argentina: Another Episode in The IMF Soap Opera

Argentina: The Month at a Glance

Can Argentina End Up In Another Debt Restructuration?

Argentina: The First Two Months in Black and White

Argentina: The Summer Ends Without Surprises

Argentina: Glass Half Empty or Half Full?

Argentina: The Wrong Medicine Against Inflation