Economic growth plays a critical role in raising living standards and enabling human progress. However, economic growth needs to decouple from negative environmental consequences, as these, in turn, degrade the very foundations of human development. One example of a negative environmental consequence is airborne emissions that lead to climate change and air pollution. To meet any emissions reduction target, the minimum requirement is that economic growth decouples from emissions growth. Hence, at best, emissions would be reduced from year to year, at a steady pace, even if the economy grows—a process called absolute decoupling. At second-best, the growth rate of the economy would outpace the growth rate of emissions—a process called relative decoupling.

No decoupling of emissions from economic growth in MENA

The Middle East and Northern Africa (MENA) is the only region in the world where greenhouse gas (GHG) emissions are not decoupling from income growth. The decoupling processes can be visualized as is done in Figure 1 for a world average as well as for Europe and Central Asia (ECA) and MENA. It plots the growth of gross national income (GNI, blue line) and carbon emissions (red line), both in per capita terms, from 1990 to 2018 for an average resident of the world, ECA, and MENA. Globally (left panel of Figure 1), relative decoupling was achieved with average incomes rising faster than per capita carbon emissions, even though emissions were still increasing over this period. In ECA (middle panel of Figure 1), absolute decoupling was achieved, with average carbon emissions per capita decreasing by around 30 percent compared to their 1990 levels. In a forthcoming report,“Blue Skies, Blue Seas in the Middle East and North Africa,” we show that North America also achieved absolute decoupling, while other regions of the world (including East Asia and Pacific, South Asia, sub-Saharan Africa, and Latin America and the Caribbean) managed to decouple income growth from carbon emissions relatively. In stark contrast, MENA (right panel of Figure 1) is the only region, in which growth of CO2 emissions per capita has outpaced the growth of average incomes, making it the only region that hasn’t decoupled in some form.

Figure 1. MENA, unlike other regions, is not decoupling income growth from carbon emissions 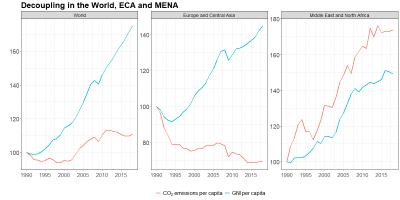 MENA is an assortment of heterogenous countries: Some actually did manage to decouple, while most others did not. When zooming in on the individual country level, it becomes clear that while MENA as a region was not able to decouple income growth from carbon emissions growth, some countries in the region were. Figure 2 shows that while Iran, Oman, Iraq, and Saudi Arabia were not decoupling, other countries such as Tunisia, Lebanon, and Djibouti have achieved relative decoupling. Bahrain and Jordan were even absolutely decoupling (although only slightly).

Figure 2. Some MENA countries have managed to decouple carbon emissions from income growth 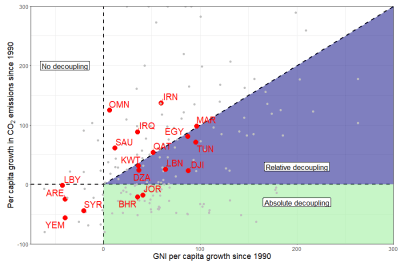 Air pollution emissions are decoupling in MENA from economic growth, although this is the world region where this decoupling is taking place at the slowest rate in international comparison (see Figure 3). The pattern is similar for air pollutants such as nitrogen oxide (NOx), which stems from road transport and industries but also agriculture, and sulfur dioxide (SO2), which stems mainly from burning fossil fuels by vehicles but also from energy production. Figure 3 plots differential growth rates for incomes and the respective air pollutant and while MENA has been able to relatively decouple NOx and SO2 emissions from income growth, it was the slowest region doing so. There has been an acceleration of this decoupling trend in recent years due to advances in industrial and agricultural processes; for example in Iran, NOx emissions from the agricultural sector have been reduced strongly by less intensive use of fertilizers, while the switch toward gas for energy production away from heavy oils and desulfurization of flue gas has helped reduce SO2 emissions. In Egypt, industrial NOx emissions decreased beginning in 2010, partly due to advances such as the switch from burning heavy fuel oil (so-called mazout) to using compressed natural gas in brick factories, and due to incentivization of resource efficiency and end-of-pipe technologies. Morocco has also seen positive developments regarding its SO2 emissions, which is attributable to the enforcement of strict sulfur limits in gasoline and diesel in the past years. Nonetheless, slow overall decoupling of these air pollutants puts MENA again at the back in a regional comparison.

Figure 3. MENA region is slowest in decoupling NOx and SO2 emissions 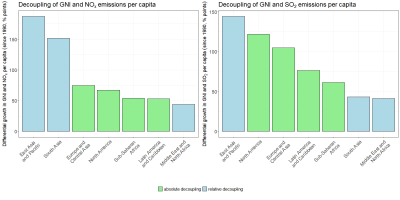 Source: World Bank staff based on data from United Nations Development Program, Hoesly et al. (2018) and World Resources Institute.
Note: Figures show differential between growth rates of gross national income per capita and the emission of the respective air pollutant per capita. Growth rates are calculated in comparison to 1990 levels and the differences in growth rates were computed (and expressed in percentage points).

This blog showed that MENA was the only region to not decouple income growth and carbon emissions growth and the least successful in decoupling income growth from air pollutant growth. But what are the reasons for these failures and what can be done about it? Stay tuned for a follow-up blog in which we will discuss why there has not been decoupling in MENA and how to kick-start decoupling, and review some of the main messages coming out of the regional flagship report “Blue Skies, Blue Seas in the Middle East and North Africa.”

The impact of COVID-19 on industries without smokestacks in Uganda

The power of technical and vocational skills: Increasing girls’ participation in formal agriculture education in Afghanistan

What is swing pricing?