Developing countries have been liberalizing their trade since the late 1980s. The establishment of World Trade Organization (WTO) in 1995 and the subsequent proliferation of free trade agreements (FTAs) furthered this trend. As a result, applied tariff rates have fallen by 66 percent since 1996. However, such tariff liberalization has not always translated into lower trade protection in developing countries. A key reason for this is that the fall in tariffs has been typically accompanied by an increase in nontariff measures (NTMs), such as policies and regulations that constrain imports.

Such trade policy substitution can be relatively innocuous because, unlike tariffs, NTMs do not generally have a discriminatory or protectionist intent. They are usually imposed to promote non-trade objectives, such as ensuring environmental, health, and safety standards. However, in practice, NTMs can shape both trade costs and market access. The implementation of NTMs can be complex and burdensome. The cost of following these regulations is typically higher for some products, sectors, and firms. Many firms in developing countries lack the capacity and resources to comply with required technical specifications and standards. Research shows that NTMs contribute to overall trade restrictiveness. In fact, their restrictive impact on trade is higher than that of tariffs.

Are technical considerations or larger political-economy factors at work?

While there is substantive work on the role of politically influential business groups in shaping tariff policies, we have limited knowledge of the institutional and political determinants of NTMs. Recent evidence shows how exceptional non-tariff measures, such as anti-dumping and safeguarding measures, were used in the wake of India’s IMF Agreement in 1991 to substitute for the fall in tariffs in politically organized sectors. Does this logic apply even to non-exceptional NTMs, such as technical barriers to trade?

In recent work, we examine the political economy of an important trade episode in Morocco. In 1996, Morocco signed an association agreement with the European Union (EU), which led to a dramatic reduction in tariff barriers. Driven largely by geopolitical objectives, the agreement was part of the EU’s Barcelona process that attempted to link “security and stability in the Mediterranean” with trade cooperation. Singularly focused on tariff reduction, the agreement triggered an across-the-board tariff cut that was followed by a substantial increase in NTMs. Given that the EU is Morocco’s largest trading partner, the EU-mandated tariff reduction represented a major trade policy shock.

Were sectors with prior exposure to politically connected firms more likely to receive compensatory protection in the form of NTMs? Our paper examines over 1,500 manufacturing firms and finds that previously politically connected firms received substantially higher nontariff protection after the agreement (see Figure 1). On average, the NTM coverage ratio was 9 to 11 percentage points higher in politically connected sectors relative to unconnected sectors where this ratio was 24 percent. Disaggregating the analysis by type of NTMs, we find that our results are principally driven by technical barriers to trade (TBTs) whose enforcement requires greater administrative oversight and is susceptible to political abuse. We also examined whether the compensatory trade protection in the guise of NTMs especially favored sectors with royally owned firms. Differentiating between different types of political connections, we show that the effect of cronyism on trade policy substitution is primarily driven by firms owned by politicians, royal advisers, and confidants rather than royal firms. 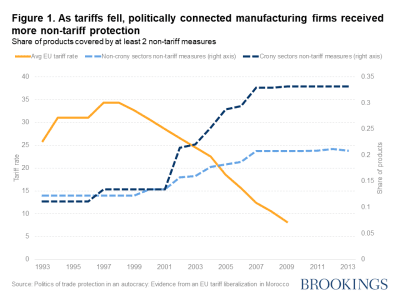 This is explained by two factors. First, the monarchy has a comparatively stronger presence in the services sector (e.g., real estate, banking, and finance) whereas nonroyal firms are mainly active in manufacturing. Second, even if sectors with royal firms witnessed a comparatively smaller increase in NTMs after the EU agreement, its protectionist impact was substantial. To establish this, we analyze the ad valorem equivalents (AVEs) of NTMs that measure the “additional costs” that NTM presence imposes on imports. AVEs are typically used to express the trade impact that an NTM would have that is akin to a uniform tariff. Our analysis suggests that median AVEs in 2009 were 65 percent in royal sectors compared to 49 percent in nonroyal sectors.

Our work also sheds light on the political economy of trade policy in autocratic states. Prior research has mainly focused on democratic contexts where trade protection is typically exchanged for lobbying contributions by special interest groups. Political scientists emphasize that authoritarian rulers face a perennial challenge of survival in the face of threats, including those arising from within the ruling elite coalition. In the face of such threats, rulers frequently need to buy elite support by granting privileges and sharing rents. In this milieu, trade policy can be used to generate rents that can be selectively and strategically passed on to political powerful groups in exchange for their support.

The impact of COVID-19 on industries without smokestacks in Uganda

The power of technical and vocational skills: Increasing girls’ participation in formal agriculture education in Afghanistan

What is swing pricing?