On June 14, the United Nations released its 2021 Sustainable Development Goals (SDG) Report, which examines the world’s progress toward accomplishing the SDGs. The most recent edition placed special emphasis on the COVID-19 pandemic given its role in reversing many SDG gains. More specifically, the authors note that years or even decades of progress have been halted or reversed due to the pandemic.

For example, countries have made major progress relating to SDG 7—ensure access to affordable, reliable sustainable and modern energy for all. While the electricity sector has increased and renewable energy has improved, millions of people still find themselves without power and many major improvements are under threat. While 46 percent of sub-Saharan Africa’s population now has access to electricity—up from 33 percent in 2010—the region is far behind the global average of 90 percent (Figure 1). Indeed, 97 million people in urban areas and 471 million in rural areas are still without access to electricity.

Figure 1. Proportion of population with access to electricity, 2010 and 2019 (percentage) 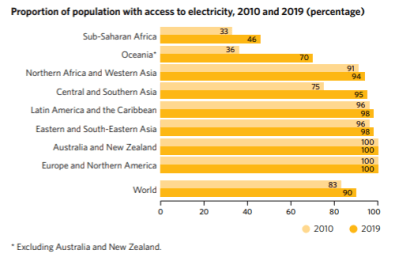 Moreover, according to United Nations Department of Economic and Social Affairs Statistics Division, the COVID-19 pandemic could reverse progress in some countries. In fact, in developing countries in Africa, the number of people without electricity increased in 2020 (after declining over the past six years) and basic electricity services are now unaffordable.  Moreover, the cost of electricity services in sub-Saharan Africa remains among the highest in the world—and those who can afford electricity often face unreliable service. As poverty levels increase., countries will be forced to scale back to basic electricity access because citizens will not be able to afford formal electricity bundles.

These persistent gaps in access to energy are also colliding with the increasing threat of climate change, forcing policymakers to navigate a complex, difficult policy environment. As such, many countries are looking to increase their reliance on renewable energy sources. However, least-developed countries receive only a small amount of international financing for renewable energy. In fact, that number is decreasing: In 2018, financial flows to developing countries for climate change and renewable energy were 35 percent lower than in 2017 (Figure 2).

Figure 2. International financial flows to developing countries in support of clean and renewable energy by type of technology, 2010-2018 (billions of dollars at 2018 prices and exchange rates) 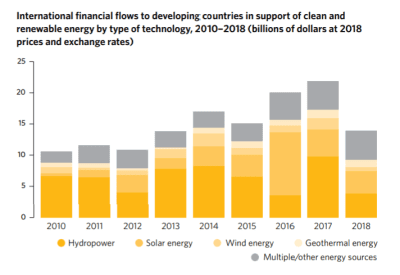 According to the report, countries with the lowest levels of electricity access tend to be least-developed countries, which are largely found in sub-Saharan Africa, and these same countries receive far less energy funding than the global average. Moreover, not only did financial flows for such projects decrease overall in recent years, the financing that was given tended to be concentrated in specific countries. For example, 46 of the least-developed countries combined together received only 20 percent of commitments over this time while Nigeria, Turkey, Pakistan, India, and Argentina combined for 30 percent.

Experts maintain that increasing electricity access will have knock-on effects in terms of economic growth and overall well-being. Indeed, lack of access to electricity severely limits adoption of emerging and potentially transformative technologies in sectors such as banking, education, agriculture, and finance that could otherwise alleviate some of the core challenges facing Africans, such as low productive employment opportunities and limited health care.

Training and support for female entrepreneurs in Vietnam: What do women want and need?

Who’s ready to change? Tracking adaptations during scaling in education

The brutal truth about Bitcoin

The key to global climate success

Regional integration in West Africa: Is there a role for a single currency?