As elsewhere in Africa, the issue of jobless growth in Ghana has become a major concern, particularly due to rising unemployment among the youth. Services have emerged as the driver of growth in Ghana, contrary to the experiences in East Asia and other newly industrialized countries where manufacturing exports led growth and added capacity to absorb low- to medium-skilled workers. In fact, in Ghana, manufacturing has performed abysmally, with an average growth rate of 3.2 percent between 2008 to 2017.

Despite the generally strong performance of the Ghanaian economy over the last two decades, (albeit with a slowdown in recent times), there is a disconnect between GDP growth and employment—a trend that has persisted for many years, as the country has averaged an employment-to-growth elasticity of 0.5 over the last two decades. However, recent evidence points to the role of emerging high-productivity sectors, such as agro-processing, tourism, and horticulture, among others, that share characteristics with manufacturing (particularly in the employment of low- to medium-skilled workforce), in solving the youth unemployment challenge through the generation of decent jobs in Ghana.

Thus, to examine how Ghana might best leverage recent growth trends for job creation, we recently published a paper identifying which of these sectors might play this role in Ghana. This research is part of a larger, multicountry project on policies for enabling “industries without smokestacks” (IWOSS) to both grow and absorb low-skilled labor. (For more on this project, see “Exploring new sources of large-scale job creation: The potential role of Industries Without Smokestacks.”)

The state of the Ghanaian economy

The Ghanaian economy’s strong performance over the last two decades has not translated into job creation nor improvements in employment conditions, especially for the country’s growing youth population (Figure 1). Moreover, the country’s traditional reliance on primary commodities—notably gold, cocoa, and, more recently, oil—for exports has exposed it to international commodity price fluctuations, making the need for diversification and structural transformation more urgent.

Source: Authors’ illustration based on data from WDI.

With an average national unemployment rate of about 6 percent, unemployment among the youth (persons aged 15-35) is much higher at 12.1 percent with an additional 28 percent out of the labor force as discouraged workers. In the absence of unemployment benefits in the country, unemployment is simply not an option for most people, particularly the youth who often turn to the informal sector to earn an income. In fact, 1 in 3 young people in Ghana are self-employed in the nonagricultural sector as own-account workers in vulnerable jobs.

In our paper, we find that IWOSS sectors—particularly agro-processing and horticulture, transport and storage, hotels and restaurants (tourism), and construction—will contribute a little above 50 percent to total employment by 2035 (see Table 1). 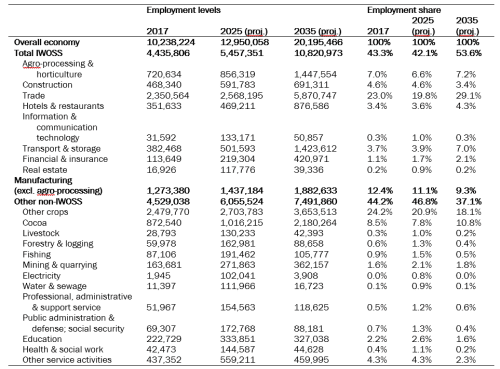 Note: This table is a truncated version of Table 20 in the full paper.
Source: Authors’ calculations based on National Income Accounts (published by the Ghana Statistical Service), GLSS V and GLSS VI, National Budget and Economic Policy Statements. See Appendix C for the Methodology used in the projections to 2035.

The job creation potential of agro-processing and tourism

In our research, we identify agro-processing and tourism as the IWOSS sectors best poised to address this challenge in Ghana because of their high employment generation potential and the demand for low to moderate skills—a feature that is consistent with the skills spectrum of the unemployment pool in the country. Indeed, the prospects for both agro-processing and tourism sectors in Ghana are high in terms of growth and other positive spillover effects with opportunities for job creation. The agro-processing industry is dominated by micro and small firms involved in value-addition along the agricultural value chain in horticultural products, vegetables, roots and tubers, and palm oil for both domestic and foreign markets. In the area of tourism, Ghana has several natural, cultural, and heritage resources (e.g., historical forts and castles), national parks, a beautiful coastline, and unique art and cultural traditions that can be a source of great attraction to the international community.

1 in 3 young people in Ghana are self-employed in the nonagricultural sector as own-account workers in vulnerable jobs.

What skills are required to develop the IWOSS sectors?

Despite this promise, though, a number of obstacles stand in the way of these sectors’ growth and ability to absorb jobs. Prominent among these challenges is the persistent skills gap among the youth: Our projections generally suggest that low-skilled jobs (i.e., those requiring less than secondary education) will continue to dominate, and their importance may decline only marginally. Thus, we find that deliberate public effort is required to ensure the youth can be absorbed in the IWOSS sectors, which requires upskilling.

To better understand the nuances of these gaps, we conducted a survey with a sample of firms in agro-processing and tourism in which we inquired into requisite skills for potential employees. Results from the survey show that most employees possess basic and social skills, which conveniently meet the needs of employers. Conversely, system skills—developed capacities used to understand, monitor, and improve sociotechnical systems and also sorely needed by employers—were found to be lacking in both tourism and agro-processing firm employees. Figure 2 reveals the differences between the current skill level of workers and employers’ expectations.

Importantly, given that surveyed firms largely reported that digital skills like data management and analytics, production management, mobile transactions, and social selling (in agro-processing), and online communication and mobile transactions (in tourism) will be vital to future employees, policymakers must strive to better incorporate such capacity building into curricula.

In order to unearth the employment generation capacity of IWOSS sectors, key constraints that inhibit the growth of these sectors have to be addressed. In the case of firms in tourism, such constraints include tax rates, policies, and administration; access to credit; and electricity supply. For firms in the agro-processing sector, these constraints include electricity supply, access to credit, unfair practices of informal competitors, and customs and trade regulations.

First, we recommend an overhaul of the overall policy environment toward the training of young people in the requisite skills to be productive in all sectors of the economy. More specifically, the government must prioritize and increase enrollment into technical and vocational education and training (TVET) for hands-on employable skills to support growth and provide a pathway for sustainable employment for young people.

Second, the establishment of industrial parks, which is based on the positive spillover effects and upstream and downstream linkages associated with clustering and agglomeration, is often acknowledged to be essential for industrial development. Support to the private sector by the Ghana Free Zones Authority and Ghana Investment Promotion Centre for the establishment of industrial park infrastructure and special economic zones is anchored on such potential benefits.

Third, we recommend the strategic development of infrastructure as a critical stimulus to the drive for diversification and industrialization in the country.  Fourth, government should intensify efforts at providing long-term financing to support the value chains of these sectors and upgrade them to address the issue of IWOSS firms not being well advanced, with a relatively low degree of value-addition by all firms at various stages.

In the end, we find that the agro-processing and tourism sectors can be critical for addressing the country’s jobless growth challenges, if interventions like improved infrastructure, better access to long-term financing, and enhanced digitization, among others, can be implemented. These efforts must be complemented with various incentives to local firms as well as institutional arrangements to increase local demand. (See the paper for a full list of policy recommendations.) Finally, given the increasing importance of technologies in both agro-processing and tourism, the country must invest in complementary digitalization for actors to adapt and be competitive in the changing nature of work globally.